We’ve heard a lot about Windows 8 today – Netflix pushed a Windows 8 update earlier today, we learned a little more about the Windows 8 marketing campaign, and – most importantly – the new OS officially went up for pre-order. With that mind, Best Buy has wasted no time putting Windows 8 PCs on display in some of its stores. WinSource reports that at least one Best Buy store is showing off a number of HP Windows 8 notebooks, ultrabooks, and all-in-one PCs to get customers excited about the release of the latest Windows installment.

Specifically speaking, a Best Buy location in St. Cloud, MN has the HP Pavilion 23, the ENVY TouchSmart, the ENVY 23 TouchSmart, and a pair of ENVY m6 laptops out on the show floor for customers to play around with. You obviously can’t take one of them home with you today, but this a good chance to see Windows 8 in action. This should be especially handy for those who didn’t want to bother with installing the Windows 8 Consumer Preview.

Windows 8 is scheduled to launch on October 26, and it looks ready to take the PC world by storm – or at least that’s the outcome Microsoft is hoping for. Microsoft chief Steve Ballmer recently said that he thinks Windows 8 could be as big as Windows 95 was for the company, and manufacturers are more than willing to show us their fancy new Windows 8 machines. Microsoft has pumped a lot of money into the marketing campaign for Windows 8, so you can bet that those manufacturers are counting on the new OS to move some machines once October 26 is on the books. 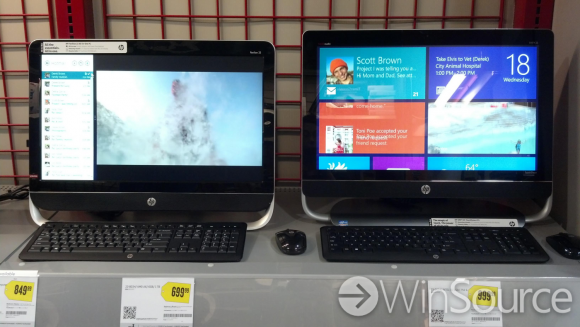 Thought WinSource’s report only covers one Best Buy store, there’s a good chance that other stores have already put Windows 8 devices out on the show floor. If your store hasn’t yet, it’s only a matter of time. In any case, if you’re interested in checking out Windows 8, it can’t hurt to stop by your local Best Buy to see if it has any computers running Windows 8 you can take a look at.