Will Wearables Fuel – or Fracture – Convergence?

The candid snapshot of Google exec Sergey Brin, riding the subway on a $2.25 fare while sporting a Glass prototype worth thousands of dollars, has reignited questions around ubiquitous computing. That sighting of Brin is a timely one. Not only is Google’s Glass Foundry developer schedule kicking off at the end of January, but several other wearables projects have reached milestones this month; Vuzix brought out prototypes of its Glass rival a few weeks back, while Kickstarter success Memoto applied some extra-sensor balm to the sting of an unexpected hardware delay today.

As each project tracks toward release, however, the ecosystem of more straightforward body-worn gadgetry such as activity monitors like Jawbone’s UP picks up for what’s predicted to be a bumper year of sales. Still, among sensor ubiquity and the specter of power paucity, the fledgling wearables industry hasn’t apparently decided whether it’ll face this brave new augmented world hand-in-hand, or jealously guarding its data.

Project Glass and Memoto both take photos, but otherwise they come at the wearables space in a very different way. The Google headset shoots stills and video on-demand, but isn’t – as far as we know – intended for permanent streaming. Memoto’s camera, however, is intended as a life-logging tool, periodically snapping shots and tagging them with location and direction; earlier today, the team behind the project confirmed there’d now be a digital compass in there too. Other wearables take their own routes to your wrist, jacket lapel, or elsewhere on the body, such as UP or other digital activity monitors.

Though the ethos may be different, much of the hardware is the same. Headset, wearable camera, and wrist-born pedometer-on-steroids all have motion sensors; both Glass and Memoto have digital compasses, and GPS. There’s a huge degree of overlap, even more when you factor in that most users of wearables will also be carrying a smartphone, with its own battery of sensors and radios.

So, with Memoto’s new-found digital compass, how does its hardware differ from that of an UP, or Fitbit’s Flex? All three have the ability to monitor patterns of movement and figure out if you’re running, or walking, or sleeping; all that’s missing is the software to do the crunching of that data on the camera. Why should tomorrow’s wearables enthusiast carry two, or three, or more accelerometers and magnetometers, when the data from one is sufficient?

Of course, sharing sensors is only one element of what convergence demands: there’s a bigger compromise to be made, when fewer gadgets perform more tasks. Battery life continues to be the bane of the consumer electronics world, and that headache is only going to be magnified when it comes to body-worn technology. A hefty smartphone with a big screen and a 3,000mAh+ battery might be acceptable in your jacket pocket, but a power pack of that size simply isn’t going to fly when you’re wearing it on the side of your head.

In many ways, then, the PAN – or Personal Area Network – is inescapable. The early iterations of wearables are naively insular in their approach: they try to do everything themselves, with little reliance and few expectations of the other gadgetry on your person. Take, for example, Vuzix’s Smart Glasses M100, a prototype of which we played with at CES earlier this month. Inside the chunky headset there’s a full Android computer, with all the connectivity you’d expect from a reasonably recent smartphone, bar the cellular data. 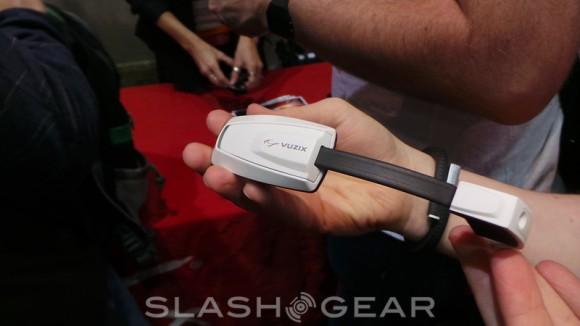 That makes for a wearable with impressive standalone abilities, but also one that’s greedy for power. Vuzix’s headline estimate is up to eight hours of “typical use”; however, what’s “typical” in the manufacturer’s opinion is sporadic activation summing just two hours in total, or even half that if you want to use both display and camera. All that despite the fact that your smartphone – which you’ll probably need anyway, since Vuzix supplies a remote control app to more easily navigate the M100’s apps – has a processor, battery, radios, sensors, and other hardware already.

Bluetooth 4.0, the most power-frugal iteration of the technology, may go some way to popularizing PANs. Still, that’s just the virtual cable: the glaring omission is any sort of wearables standardization, which would allow your eyepiece from manufacturer X to output the information from smartphone Y, having called upon sensors Za, Zb, and Zc dotted around your body (not to mention in spread around the ecosystem around you).

Predictions have it that the wearables market will explode over the next 4-5 years, albeit beginning with more humble tech like activity tracking bracelets, but building to Glass-style headsets once the technology gets in line with affordable pricing. That may well be the case, but it will take more than slick hardware and project execs that drink the Kool-Aid to motivate the industry. We’ve put up with silo’d ecosystems in smartphones, and stomached it in tablets, but if wearables are to succeed the consumer electronics industry will need to set aside its appetite for insularity and embrace openness in augmentation.