This week the folks at Nintendo have announced that they’ll be giving the Wii U a tune-up just in time for the release of both the Sony PlayStation 4 and the Microsoft-made Xbox One. This reboot of sorts is not one of hardware, but of price: the Wii U Deluxe Set will be cut down $50 to a total of $299.99 starting on the 20th of September. The company has also made clear that this change is to bring a “greater value” to the market, not mentioning the impending wave of competition they’ll be defending against nearer the end of this year.

This set’s price chop may be a sign that Nintendo president Satoru Iwata has changed his mind since his comment earlier this month on Wii U sales, which are – at the moment – dropping significantly.

“There is some contradiction between the current sales balance between the Basic and Premium versions of the Wii U. The basic version should have sold a lot, but the fact of the matter is that people are buying more of the premium version.

So the issue is not there. [Instead it’s] the lack of software, and the only solution is to provide the mass-market with a number of quality software titles.” – Iwata for Nintendo

At the moment it’s not clear what will happen with the price for the basic Wii U set, be it a $50 reduction in price as well (making it $150.99, essentially), or if the basic set will be axed entirely. What is clear is that the Nintendo crew responsible for promoting this console have done so with a single price chop and a push with a big collection of games coming in the fourth quarter of 2013.

Nintendo has also announced a “limited-edition” Wii U bundle tied in with the launch of the next Zelda title. This Legend of Zelda: The Wind Waker HD Bundle will launch at the same time as the game does digitally, while the physical game disk will not be available until the 4th of October. 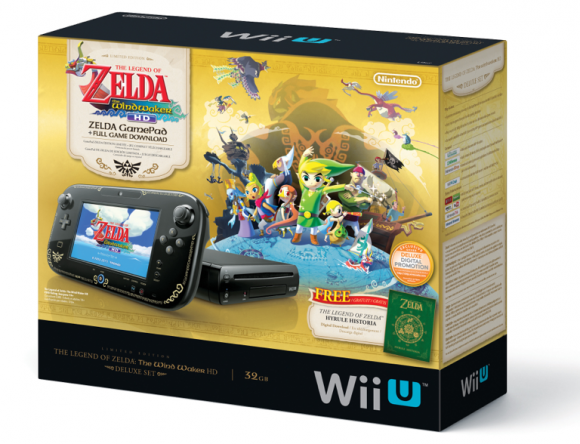 This Zelda Wii U works with a Deluxe Wii U setup that includes a GamePad controller “adorned with gold lettering” as well as the gold Hyrule crese and gold symbols from the game series. There’ll also be a download code for a Hyrule Hystoria digital book and a separate code to download the full game. Both the digital download and the physical copy of the game will be launched with a price of $49.99, though if you wait for the physical version, you get a fabulous “distinctive gold-foil packaging” – fancy!

What does all of this suggest to you, the gamer? Does it seem like Nintendo is showing signs of wear now that Microsoft and Sony are edging in on their next-generation console releases, or is this just Nintendo being good ol’ Nintendo? Let us know how it looks to you!