Palm’s webOS ROM has only been in the wild for a matter of hours, and already the first homebrew apps are showing up.  A developer going by scm6079 has put together a test app that displays a simple “Hello World!” message and runs a five-second timer; meanwhile others are trying to disable the Pre’s otherwise unassailable camera shutter sound.  Meanwhile, there’s also talk of a third device codename (after “castle”, the Pre, and “pixie”, the Eos), as the ROM apparently contains reference to “zepfloyd”.

The “Hello World!” app overwrote the pre-installed Sprint NASCAR app, which shouldn’t come as too much of a disappointment to most users.  Many of the team currently working on the webOS root image are apparently ex-PalmOS hackers, for whom Palm still seems to have some of its allure.

Now would seem like a great time for Palm to turn around and say “okay people, here’s some official SDK access and support – help us make this a brilliant platform.”  It took months for Apple to harness third-party developer support with an official SDK and the App Store; Palm are halfway there, with on-device distribution already supported, now they just have to bite the bullet and trust their baby’s underlying code to developers wanting to adopt webOS. 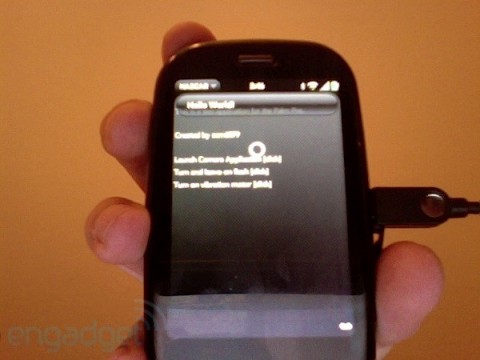