NASA‘s launch plans for the Orion spacecraft today have been hit with unexpectedly strong winds, leaving the first flight of the new capsule on hold as weather conditions are monitored. Orion was meant to blast off from Cape Canaveral at 7:05am EST today, but an automatic shutdown was triggered when systems caught strong winds whistling past the launch platform. A second attempt less than an hour later was similarly blocked by NASA’s safety-conscious systems.

NASA uses a program to automatically detect wind speed and trigger a freeze of the countdown should it exceed a 21 knot (24.2 mph) limit.

While the delay was frustrating, NASA was nonetheless confident that it could get Orion off the ground today. The launch window extends to 9:44am/14:44 UTC, the space agency said.

Orion was transferred to internal power at 7:48am ET ahead of the second launch attempt. Permission to launch was given two minutes later. 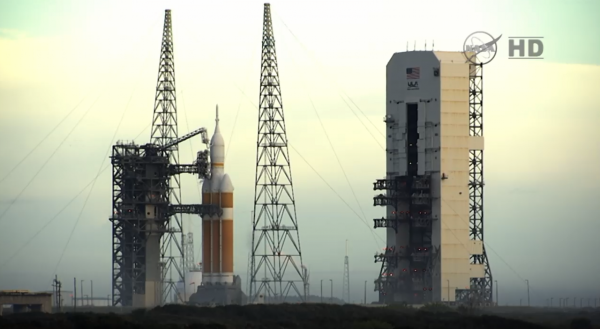 However, a second automatic shut-down ended the count only seconds after it began.

“There is optimism today,” a NASA spokesperson said of the chances of getting Orion – and the United Launch Alliance Delta IV Heavy rocket it sits atop – off the ground.

Update: NASA has cleared an issue with Common Booster Core – the central engine – and has reset the launch for 8:26 AM ET.

Although the craft is designed for deep-space missions, including eventually taking a manned crew to Mars, its journey today will be considerably shorter.

In fact, Orion will jaunt twice around the Earth before splashing down off the coast of Baja, California. Rather than a human crew, it’s filled with test equipment to see how factors like radioactivity and heat, not to mention the considerable forces involved, might affect future astronauts.

Their accommodations will be small but incredibly safety-conscious. A full crew of six should be able to survive in a depressurized cabin for up to six days, NASA’s criteria demand.