The new iPhones and iPad Air have shown that thinner and thinner devices are still a priority, and the trend can be seen on Android models as well, with shrinking Galaxy smartphones and the recently announced Oppo R5, currently the thinnest smartphone in the world. Well, they may not hold that title for very long, if fellow Chinese manufacturer Vivo is to be believed.

Yesterday, Vivo posted several pictures to its Sina Weibo account, a social network similar to Twitter. The photos showed an unnamed smartphone, presumably and Android model, that claims to be half the thickness of an iPhone 5/5S. Those iPhone models measure 7.6 mm thick, making this new Vivo model roughly 3.8 mm, even coming in under Oppo’s 4.85 mm R5. If true, that is mind-bogglingly thin for a smartphone. 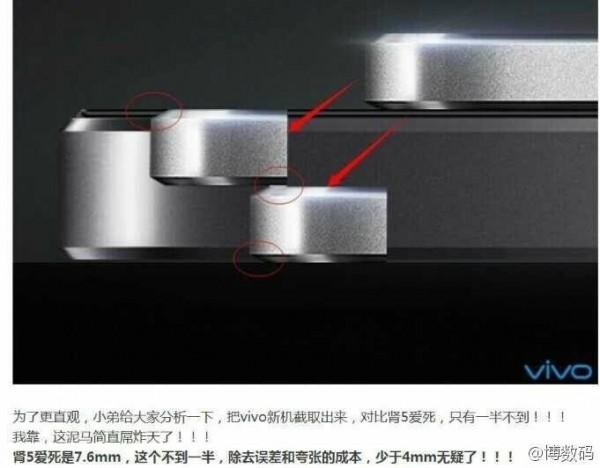 Unfortunately nothing close to an official announcement followed the post, so it’s unclear of how far Vivo may be in production, so those dreaming of a paper-thin smartphone will have to hold out. Should this turn out to be a forthcoming product, the next obvious question is what could possibly be inside, as there would hardly be any room! Odds are likely the phone would ditch a Micro SD card slot, and a headphone jack doesn’t even seem physically possible. Likewise, chances are slim (hehe, get it?) the device will feature a battery that comes close to lasting a full day.

Not to further take away from such a device, as it would certainly be an achievement of engineering, but to what purpose does such a thin smartphone serve? Have we really not yet gotten to a point where we can say “that’s too thin”? Does a phone that thin actually have any advantage over one that’s twice as thick, or is it merely a numbers game, a way to “beat” Apple and all the others on one point of the spec sheet?