If Hyperloop is to succeed as a transportation option, it needs to be more than just a fast train carriage in a tube: it needs to fit seamlessly into an overall travel ecosystem. That’s just what Virgin Hyperloop One is aiming to show off at CES 2018 today, bringing along not only its first-generation pod but showcasing an app that it says could preview how the high-speed transportation might fit in with other transit options.

It’s been built in collaboration with HERE, the mapping company, built on the HERE Technologies Mobile Software Development Kit for Business. That already includes location, mapping, and navigation support for more than 1,300 cities spread across 136 countries. For Virgin Hyperloop One, it’s added in the Hyperloop too.

“Hyperloop is not just about A to B, it’s an end-to-end passenger experience – that means no waiting at any point along the journey,” Matt Jones, SVP of software engineering at the company said of the app demo. The software will allow for a mixed-method route to be planned, of which travel by Hyperloop is only one part. “We will redefine the passenger experience by offering real time, on demand travel connecting hyperloop, other modes, and even indoor walking directions,” Jones suggests. 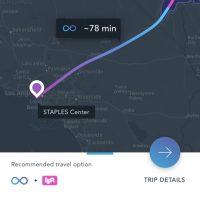 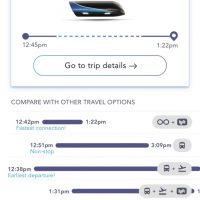 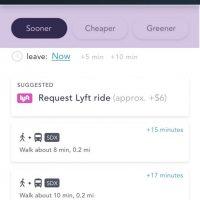 For example, you could start out your trip by ride-sharing, getting a Lyft from your home to the nearest Hyperloop station. After traveling on that at potentially hundreds of miles per hour, you might transfer to a bus, and then finally get indoor walking directions for the final sub-mile of your journey. HERE’s data includes indoor walking directions for shopping centers, venues, and other large transit centers and venues.

Formerly known as just Hyperloop One, the company inked a deal with Virgin in October 2017. Billionaire Richard Branson joined the company’s board as chairman, though details on an actual launch are still in short supply.

Currently, of course, there’s no publicly-accessible Virgin Hyperloop One to actually use the app with. The company has brought along its latest XP-1 pod that hit 240 mph in recent phase three testing to CES 2018, the first design of a full-scale Hyperloop pod that relies on the firm’s homegrown electric motor for use in the low-pressure tube.

However, Virgin Hyperloop One and HERE plan to release the app for public use in 2018, even if the Hyperloop itself won’t be a commercial option. Users will be able to set route preferences including fastest, cheapest, and greenest.