Using a Kindle for textbooks

The fall semester is well underway at this point, and if you’ve been lugging around heavy textbooks for the last two months, you’re probably ready for an alternative. Most people look toward the Kindle as that alternative; it makes sense, as the Kindle is billed as a slim, long-lasting and lightweight alternative to traditional books. Making this work, though, usually proves tricky once you give it a try. In fact, just loading digital versions of your textbooks onto something like a Kindle Paperwhite or Voyage will be little more than utterly frustrating.

There are generally two different types of textbooks you deal with in college: large instructional textbooks that you must flip through frequently, and fictional and nonfiction books you more or less read straight through.

For the latter type of books, you’re best off using a Kindle Paperwhite or other Kindle with an e-ink display: they’re easy to read both inside and outside, the battery lasts a long while, the new ones include a bunch of features like Page Flip and built-in backlights, and more. For instructional textbooks, though, you’ll need the other type of Kindle: the Fire tablets, which better facilitate image-heavy pages and rapid scrolling or a tablet with the Kindle app.

First things first, there’s the Kindle devices with e-ink displays. As many college students have discovered, these devices have limited usefulness when used with instructional textbooks — this is due primarily to the difficultly in rapidly toggling between pages. This is particularly pronounced in classes with open-book tests during which time is of the essence.

To state it plainly: e-ink Kindles are great for books you read front-to-back, but not for instructional textbooks or workbooks.

Need to read some Shakespeare plays? Some Kafka, old letters, new literature? The Kindle Paperwhite and Voyage are great for this, and Amazon has added some features to make its devices particularly useful. One such feature is Page Flip: 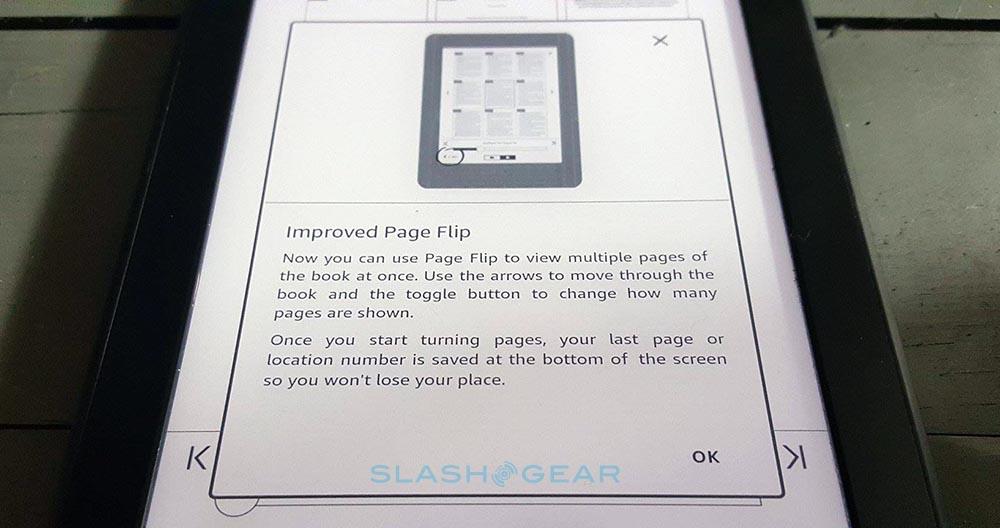 Page Flip, as the screen above describes, makes it possible to see several pages at once, and to more quickly scroll through them without losing your current place in the book. This feature makes these Kindle devices just as easy to use as an ordinary book, but with the benefit of being able to load a semester’s worth of books onto a device small enough to fit in a large pocket. 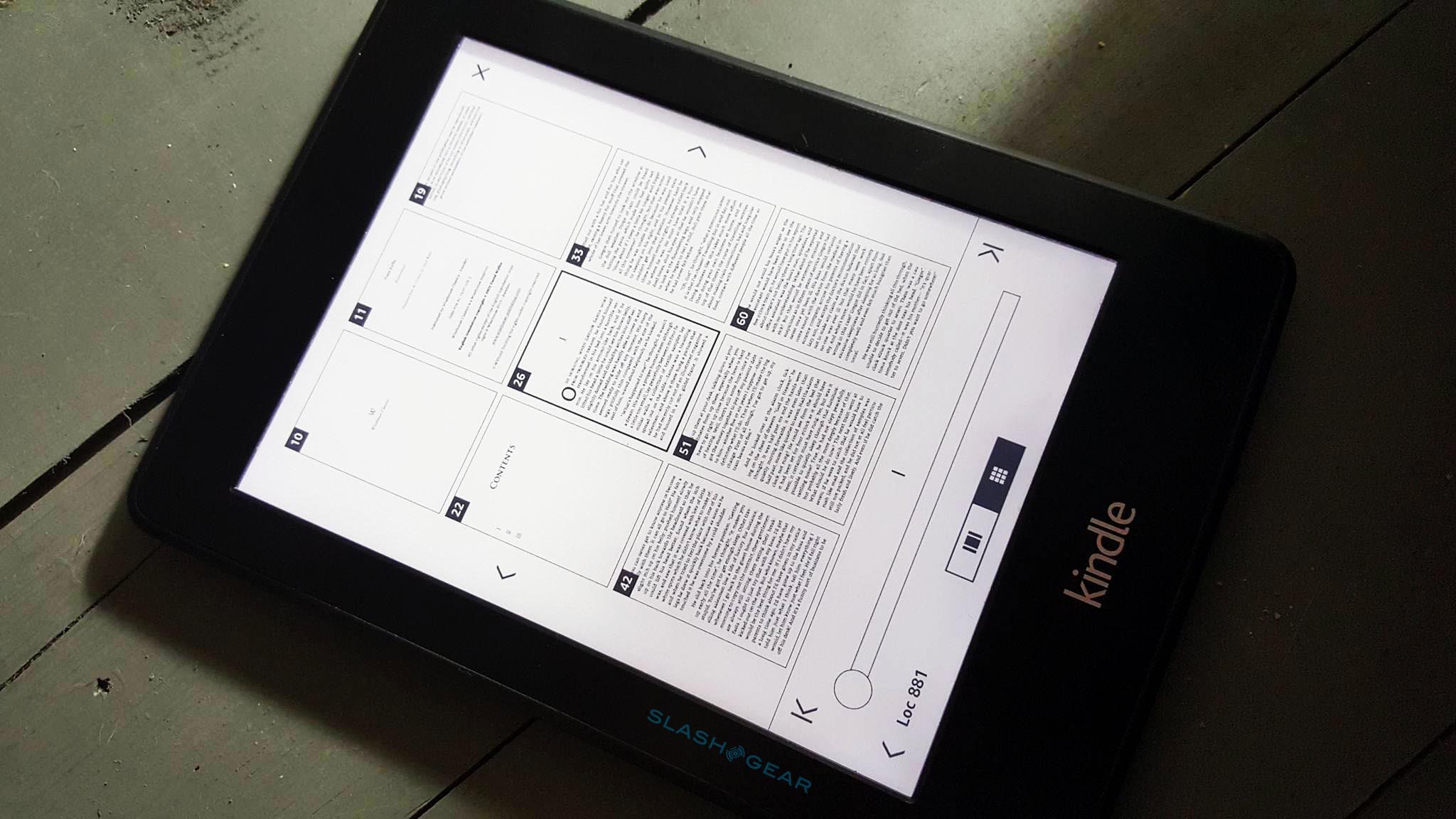 Joining the Page Flip feature is Word Wise, a feature that can be enabled and adjusted to provide on-the-fly definition for possibly problematic words. The feature can be turned on in Settings: 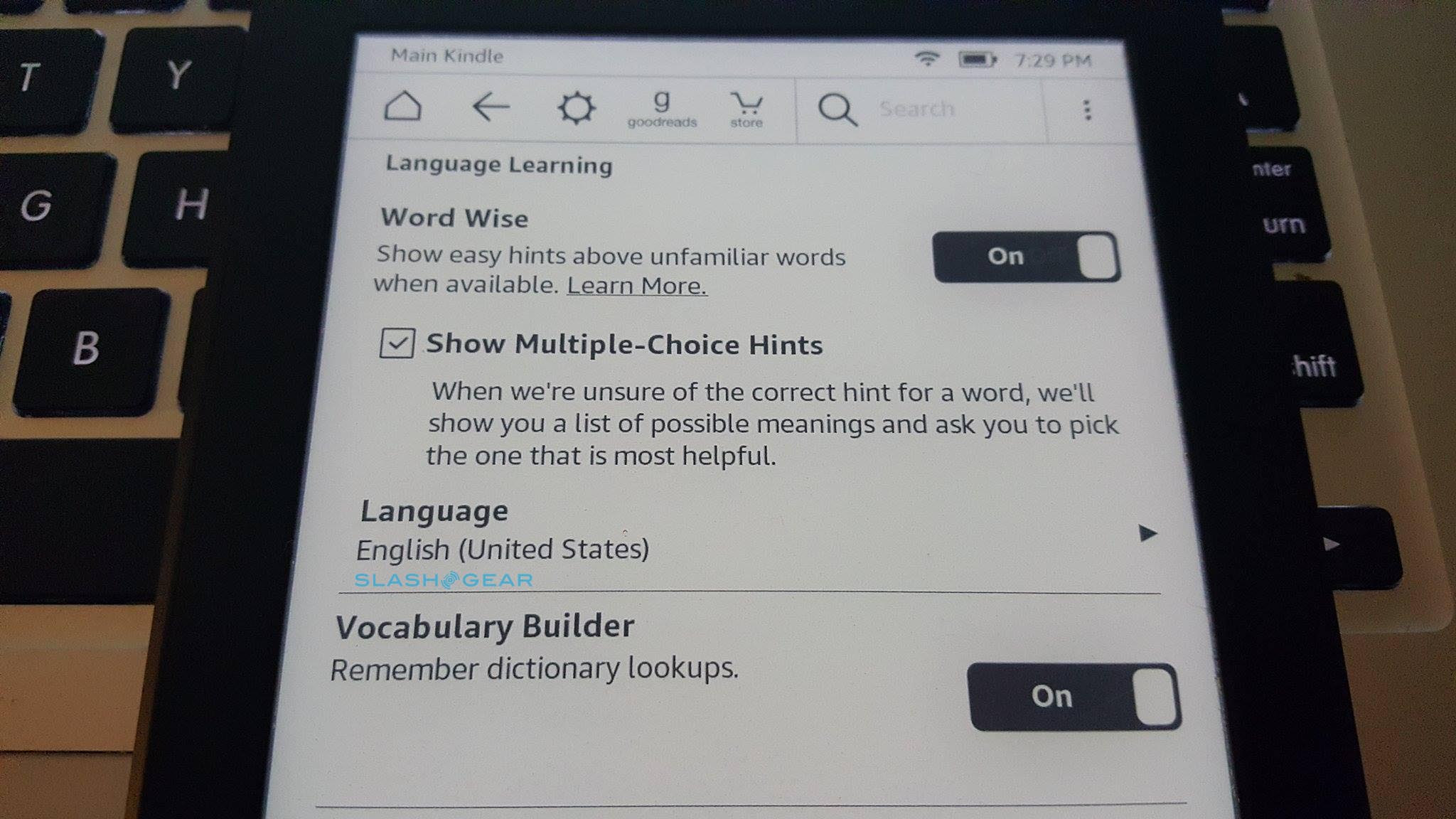 After it is turned on, return to your book, and you’ll be presented with a slider to determine how many words the Kindle provides a definition for: 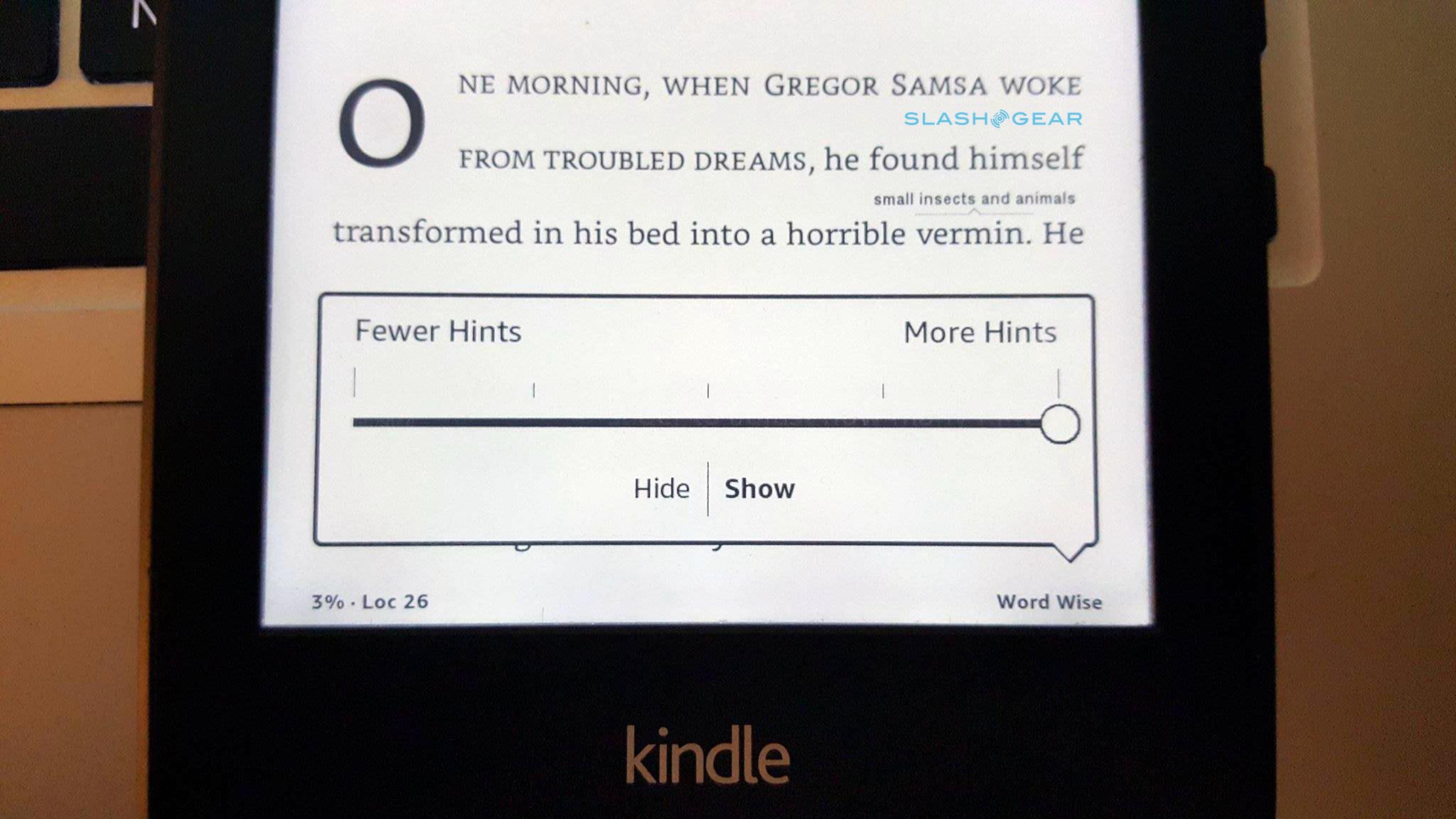 And finally, you’ll see definitions over select words that readers may have trouble with; which words get definitions depends on what you chose with the slider: 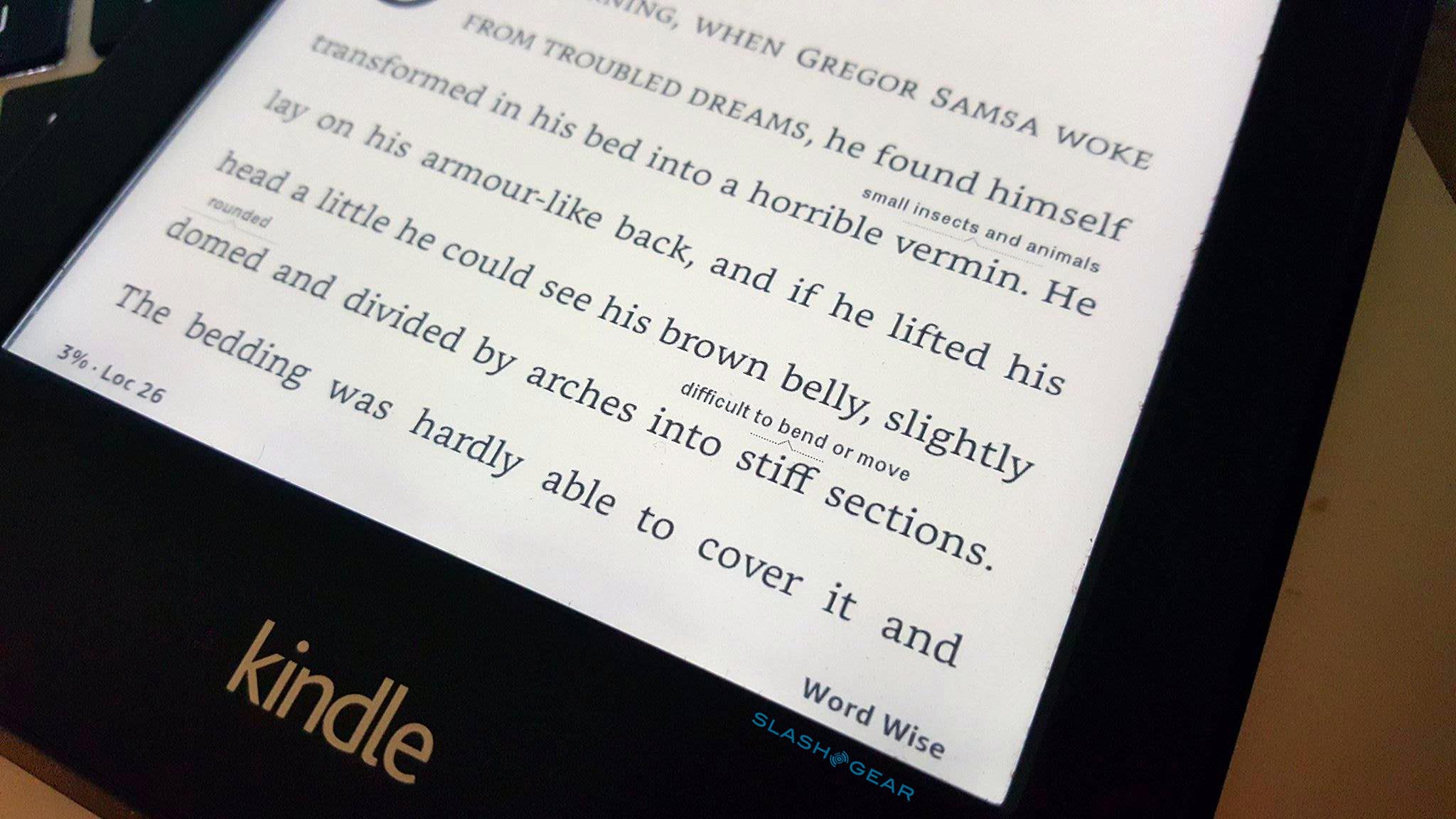 Thanks to these features, the convenience of having direct access to the Kindle Book Store, and the device’s physical features like long battery life make this a great way to tote around certain textbooks. If you can afford one and a separate tablet or Kindle Fire, by all means get one, it’ll serve you well throughout your college career.

A proper tablet, which includes the Kindle Fire tablets, are far more suitable for big textbooks, but even then, there are things to keep in mind:

— You can’t put your fingers in a couple spots and jump between them
— Highlighting and margin notes are still far inferior to paper books
— Your eyes will probably get fatigued faster
— When your battery dies, you have to stop studying until you find an outlet

If those things don’t scare you away, though, by all means get a tablet. If you’re not already enmeshed in Amazon’s ecosystem, there’s really no reason to get a Fire tablet, and in fact you may feel limited if you do. An ordinary tablet with a quality display and the Kindle app are just as suitable. In fact, you have the option of branching beyond the Kindle app and using other apps that may have better features.

The best compromise between the two is to buy the physical textbook, and to use something like CamScanner or Microsoft’s Office Lens to take snapshots of individual pages or chapters and save them as PDFs. When you need to take an open-book test, use the physical book. When you just need to read a chapter and don’t feel like lugging the full textbook around, load the scanned chapter onto your tablet and head to the coffee shop.

TL;DR? Get an e-ink Kindle for all those miscellaneous books college makes you read, but consider sticking to physical books for the giant instructional tomes that require quick flipping.