You know the feeling you get when you walk past a Google executive and just casually say hello as you enter their social network for the first time? That’s the feeling Bono-led U2 got this week as their presence on Google+ becomes news enough to cover in the ever-so-important cross-brand collaboration war between the social networks. Here U2 appears, and they appear official from the start.

What you’ll find on U2’s official page is a rather sparse set of bits and pieces here in the hour after they’ve joined. A link for a single song “Ordinary Love” from the Mandela: Long Walk to Freedom Movie, a bit on their newest release “North Side Stories”. The addition of their first profile photo and a link to the LA Time about their new album and Nelson Mandela again. 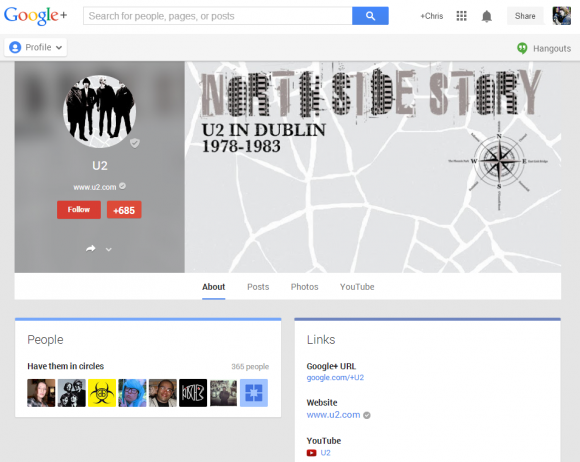 Even their “About” page is little more than a collection of links to their various self-hosted webpages. U2 either doesn’t find this connection important, or the band collectively sees the future in such things – you only really need all the most important information in one place. Everyone else can just search for it.

Despite their just having appeared for the first time on Google+ less than an hour ago, U2’s official user page has nearly 700 on the +1 front and 365 people with them in circles. Here with the proliferation of thier brand through external channels, we can only assume they’ll begin the big jump.