As one of several new means of combating abuse on their social network, Twitter is bringing on phone number verification for users. This system will not require that every Twitter verify their account using a phone number, but would potentially have some users required to verify their account or risk having said account destroyed entirely. Twitter is also enacting a feature which hides abusive Tweets from those that abused users do not follow. Abuse, Twitter hopes, will soon be a thing of the past – or it’ll be hidden from view, at least.

Certain actions are prohibited on Twitter, whether some users want to believe it or not. Harassment has become a bit of a problem in the past few years on Twitter, and amid a call to action by those not so pleased by Twitter’s other opening of the doors as of late, they’re bringing heat to security.

This is just the most basic of actions Twitter is taking a stand against this week. They also suggest now that the encouragement of harassment or threat is also considered part of their prohibited actions list. 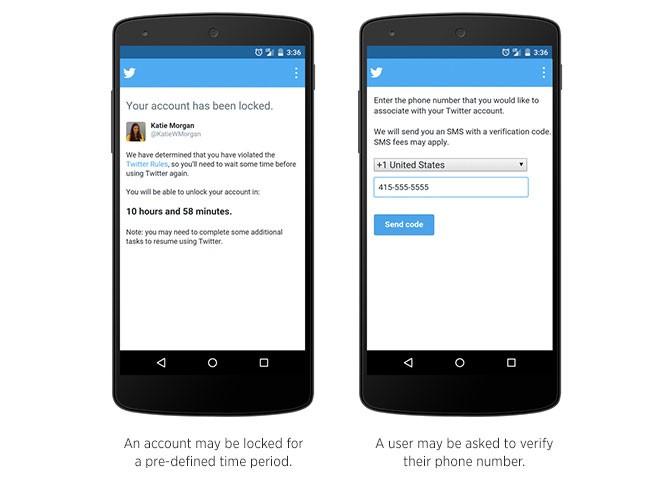 Should Twitter find any prohibited activity on a user’s account, they’ll immediately block the Tweets in question and stop that user from Tweeting.

If that harassing Tweet-slinger should want to get out of the hole, they’ll have to delete the Tweets in question manually, to make certain they know what terrible things they’ve done.

“We have determined that you have violated the Twitter Rules,” the warning will say upon locking, “so you’ll need to wait some time before using Twitter again.”

One example account blocking Twitter showed had an unlock time of 10 hours and 58 minutes attached to it. Unlocking said account required that an SMS be sent to the users phone number and that they see that SMS to enter a code to unlock their account.