Toyota may have already taken the time at Ceatec to announce its new Smart INSECT electric vehicle, but it wasn’t stopping there. The company also revealed a new version of the COMS golf cart, and looking at the images below, it seems to have a lot in common with the Smart INSECT, at least from an aesthetic perspective. One of the main differences that you’ll immediately notice is that the COMS doesn’t come with doors, which is a pretty good way of distinguishing the two.

For the most part, however, the COMS and the Smart INSECT look like they could be twins, or at least closely related. This new version of the COMS golf cart looks quite similar to previous versions as well, so we’re seeing Toyota stick with the overall insect theme. As far as golf carts go, the COMS is pretty sexy, and it comes with some decent specs to boot.

According to this chart we were given at Ceatec, the COMS can drive about 50 kilometers on a full charge. That means you won’t be getting a ton of mileage out of a charge, but driving around a golf course is a lot different than commuting to and from work each day. The battery in the new COMS will take about six hours to fully charge, and the COMS is capable of driving as fast as 60 kilometers per hours, which isn’t too bad all things considered. 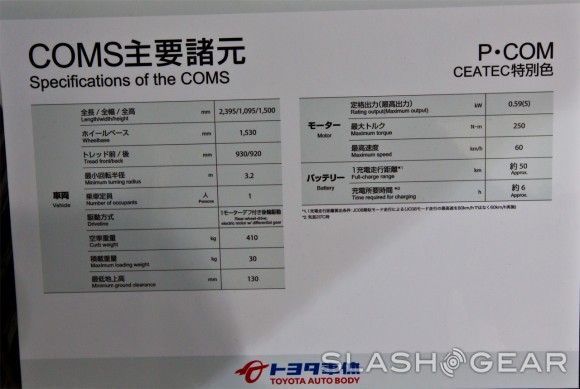 Oh, and in case there was any confusion, this new version of the COMS can only fit one person. Keep in mind that a lot of the details will be coming at a later date, so we’re just going to have to wait for those to arrive before we find out more. For now, however, we’ll just imagine racing around the golf course in one of these bad boys.