Toyota has pulled the veil off its new Smart INSECT, and its safe to say that if you want a distinctive car, this one is for you. Announced at Ceatec in Japan, this new car seems to be aptly named, seeing as how it looks an awful lot like a bug. It’s also fully electric – not a hybrid – and can be charged using a home AC100V outlet, which means no more gas for you.

Details are still pretty scarce, but we’re imagining that you can get some pretty good distance from a full charge with a car this tiny. After all, looking at the pictures above, it’s clear that this vehicle only fits one person, so we’re assuming that a full charge can take this thing quite some distance. The doors also open upward instead of outward, which adds to the distinctive bug-like look. 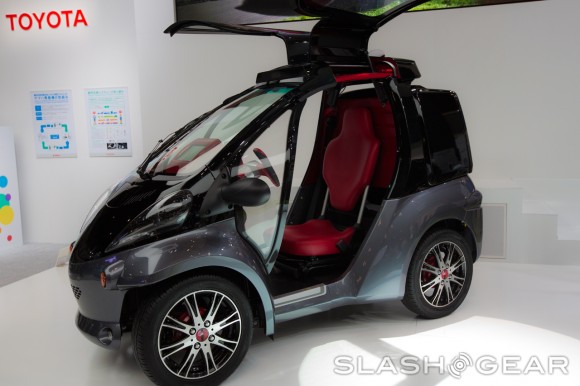 The Smart INSECT features a motion sensor that can detect when you’re nearby. As you approach, the doors open for you, so not only are you helping to save the environment by purchasing this car, but you can also feel a little like James Bond every time you get in your INSECT. The Toyota Virtual Agent can give you traffic reports through your smartphone, and if you’re Toyota Home user, you can even use your smartphone to lock and unlock the door to your house from the car. There are likely many more smart features than the ones we’re hearing about on the show floor at Ceatec, so we’ll be keeping an eye out for those.

As stated above, details are slim – super slim, for that matter – so we’re not sure when this car is launching, where it’s launching, or how much it will cost. One thing is certain: the Toyota Smart INSECT has officially caught our attention, so we’ll definitely be watching for new details to surface. Stay tuned.