Toshiba only brought along two working TG01 prototypes to the London launch of the Windows Mobile 6.1 smartphone today, but SlashGear managed to get some in-use shots of the handset in action.  The company is betting on consumers prioritising style, screen size and multimedia ability above all else, and while their claims to have created a “new category of product” can be dismissed as the usual marketing hyperbole, the Toshiba TG01 itself looks to be a very interesting device.

Toshiba will come in for the usual criticism of Windows Mobile devices for using a resistive rather than capacitive touchscreen.  Although there doesn’t appear to be a stylus silo in the handset itself, the company confirmed that a stylus would be present in the retail box.  Happily, even though the TG01 doesn’t have Windows Mobile 6.5’s larger controls, the sheer scale of the 4.1-inch 800 x 480 display means that there’s plenty of room for fingers to jab.  It remains to be seen how much the multi-pane rotating GUI covers up the Microsoft platform; on both demo devices we saw Toshiba reps accessing the standard Today screen and Start menu, though this could well be down to the pre-production status of the particular devices on show.

Minimal hardware controls are fine for most functions – the on-screen keyboard looks quite a bit like that of the iPhone, we noticed – but we’re not so sure about gaming.  The 1GHz Snapdragon chipset should handle mobile games with aplomb, but the method of control demonstrated in the driving game Toshiba showed us seemed less than streamlined, requiring multiple taps on different parts of the screen.  The photo in the gallery below, showing a rather contorted set of fingers all trying to touch the screen at once, is a good example of this. 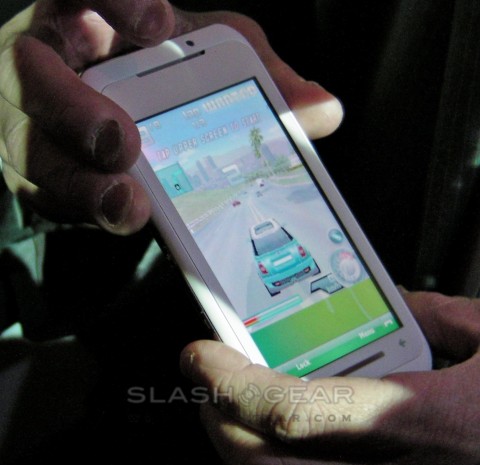 On the positive side, while title developers – and Toshiba claim to be working with several to produce downloadable, internet-enabled games – will have to work to finesse the control interface, one thing they won’t need to worry about is performance.  The video and gaming running on the demo TG01 handsets were both smooth, slick and high-resolution, even in the less than ideal lighting environment; we’d love to know if Toshiba plan a TV-out cable, as we’ve a feeling the TG01 would do a decent job hooked up to a full-size screen as a portable media player.  Out of the box it supports DivX files, and of course thanks to full Flash support you can play online video too.

In the hand, the TG01 is surprisingly lightweight and alluringly thin.  At just 9.9mm it’s significantly slimmer than the iPhone 3G (at 12.3mm) and the Touch HD (at 12mm), despite having a larger display than both rivals.  The casing is finished in soft-touch plastic, with a chromed strip running around the edges, and aside from a few hardware buttons – camera (controlling the 3.2-megapixel shooter that seems to lack a flash of any sort), volume and power being two obvious ones – and the touch-sensitive “home”, “back” and scroll-strip along the base of the display, and the microUSB port lurking under a hatch, it’s generally a clean design.  Make no mistake, this is a very pocket-friendly handset.

Toshiba wouldn’t say exactly when the TG01 would launch – only over the Summer in Europe – nor would they reveal which carriers they’re in discussion with, only that an exclusivity deal was likely.  We’re hoping to have more information about the TG01 after Mobile World Congress, but before then we’ve got live video of the handset itself.