Toshiba announced yesterday that the super-skinny AT200 tablet would be headed to the US mid-Q1 as the Excite X10, and we wasted no time in grabbing some more play with the 0.3-inch slate. First shown at IFA 2011 a few months back, the Excite X10 is just as appealing today: crisp edges, lashings of brushed aluminum and a great 10.1-inch 1280 x 800 IPS display add up to a tablet that feels as good in the hand as the on-screen graphics look.

Despite the waifish build, the Excite X10 is flex-free and feels solid; weight actually comes in at 1.18-pounds. There’s plenty squeezed inside, too: a 1.2GHz dual-core TI OMAP 4430 processor, 1GB of memory, a choice of 16GB or 32GB of storage – plus a microSD card slot to augment it – and twin cameras, with 5-megapixels on the back and 2-megapixels on the front.

Connectivity includes WiFi b/g/n and Bluetooth 2.1+EDR, along with microUSB and microHDMI, while there’s the usual bevy of sensors including GPS, a digital compass, gyroscope, accelerometer and ambient light. It’s being shown off at CES running Android 3.x Honeycomb, but all Toshiba’s press release will say is that it’ll launch with the “latest Android technology” which leaves us moderately hopeful it’ll arrive with Ice Cream Sandwich onboard. Even so, performance of the – notoriously jerky at times – Honeycomb is slick.

The Toshiba Excite X10 should arrive midway through this quarter, priced at $529.99 for the 16GB model or $599 for the 32GB version. That seems on the high side to us, especially given we’re expecting a fair few new slates at CES this week. 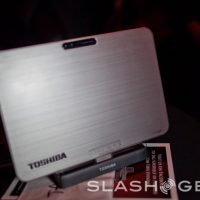 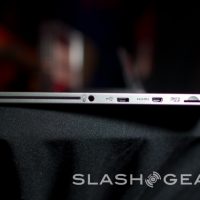 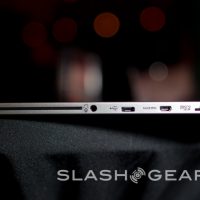