Titan Aerospace: These are the drones Google just bought

Google is adding a drone specialist to its roster of recent acquisitions, with startup Titan Aerospace set to bring its Solara solar-powered unmanned planes to the search giant’s airstrip. Billed as “high altitude persistent solar-electric UAVs,” the Titan Aerospace drones will theoretically fly for up to five years without needing to land, cruising more than 12 miles up and flying at speeds of up to 65mph.

That sort of unattended flight has some serious power requirements, of course, even without having to accommodate a pilot. Titan relies on the sun’s energy for that, along with a bank of rechargeable batteries. 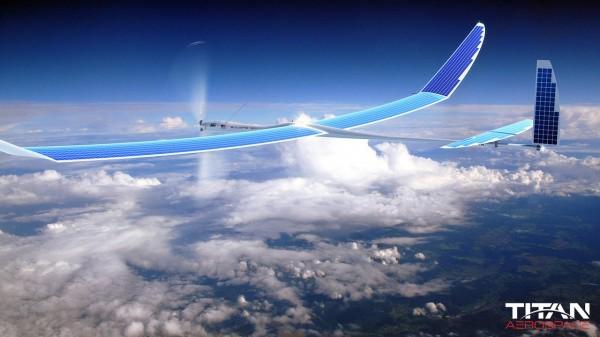 There are solar cells all across the 50m-wide upper wing surface, the elevator, and the horizontal stabilizer, with a total of 3,000 panels on the Solara 50 in all. Together, Titan says, they’re good for up to 7 kilowatts of power.

That’s enough not only to keep the Solara flying through the day, but to charge up the Li-Ion batteries spread throughout the wings that power the drone overnight. It’s capable of carrying around 70 pounds of payload.

Solara 60 is even more ambitious. It’s capable of “atmospheric parking” – in effect keeping a payload of more than 250 pounds in a spot in the upper reaches of the atmosphere, whether that’s for satellite-style services or even acting as a launch platform for exploration further into space. 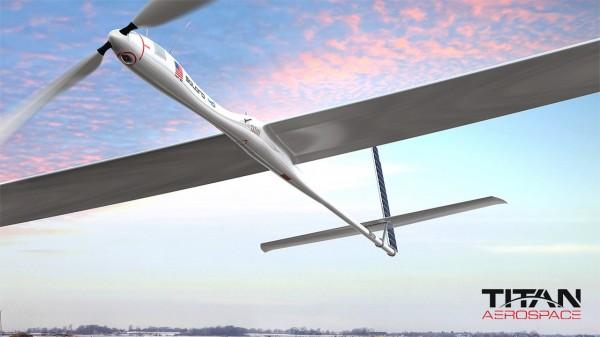 The potential applications, Titan argues, are considerable, as is the possibility of saving money compared to traditional satellite launches. NASA has been launching compact CubeSat nanosatellites from the International Space Station over recent months, an attempt to use a standardized form-factor to reduce development costs, but they still need to be shuttled up to the orbiting space platform.

In contrast, Titan Aerospace could simply launch a new UAV and leave it to autonomously perch above a set location, and while the company has never specified pricing, it’s suggested that it would be a fraction of the traditional cost.

That opens up satellite-style platforms for everything from crop and powerline monitoring, through insurance loss mitigation, keeping track of ocean temperatures and oil spills, and even asset tracking for businesses. Likely to have caught Google’s eye, however, is the voice and data potential; the search company has already said it intends to use Titan’s drone tech alongside its own Project Loon roving internet balloons, which will deliver wireless internet access to developing nations. 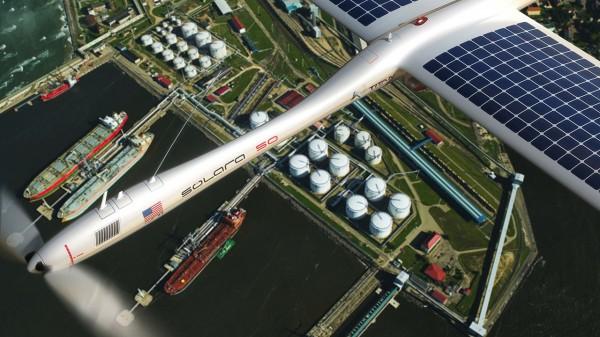 Titan has suggested that Solara could be used as a mobile repeater station, for getting around line-of-sight issues. It’s also possible that the UAVs could more readily shift to fill in gaps in Project Loon coverage, compensating for changes in the high-speed airstream the balloons travel in.

Other potential uses include adding further high-resolution imagery to Google Maps, with the possibility of more frequent updates thanks to a permanently circling flock of drones under Google’s own control. Google could even operate its own GPS alternative; Titan once suggested Solara could step in as a safety net if terrorists tried to wipe out GPS infrastructure, being far easier to launch than a replacement satellite.

“By simply launching a “low-tech” rocket filled with 50 to 100 pounds of ball bearings and then detonating it, an enemy can effectively deny space capabilities in an effort to level the playing field. These ball bearings, when inserted into an appropriate orbit, travel at relative velocities of about four miles per second and would sweep aside any satellites in the orbital plane like a proverbial broom” Titan Aerospace

Solara 60 could in effect be parked 65,000 feet up for five years at a time, running its own GPS transponders.

Of course, that all depends on actually having UAVs in the air, something which Titan Aerospace has previously said is on track for 2015. The company has flown technology demonstrations – certainly sufficient to catch the eye of Google and Facebook – but so far the atmospheric satellites are still in the prototyping stage.