Epic Games’ head Tim Sweeney explains in simple terms what Vulkan API is and why the Samsung Galaxy S7 is a gaming trailblazer. This week we’ve seen some amazing looking graphics coming from Epic Games and Samsung. With the Samsung Galaxy S7, both groups suggest we’re entering a new age for gaming on smart mobile devices. It involves Vulkan API, Unreal Engine 4, your CPU, your GPU, and a demo called ProtoStar. But what’s that mean to you, the everyday average user?

You may have heard that Samsung is one of several smartphone or otherwise Android-running device-makers to be working with Vulkan immediately if not soon. What is Vulkan, you might have asked yourself, and what does it mean for me, the user?

This week at the Samsung event that introduced the Galaxy S7 smartphone for the first time, Epic Games revealed a demo video.

This video showed some impressive graphics, but again – what does it all mean? 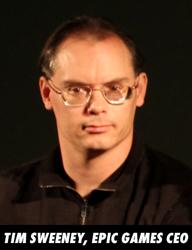 We asked the folks at Epic Games if they could simplify Vulkan and their collaboration with Samsung for the common smartphone user. They came back with no less than Tim Sweeney, their CEO, to bring it all down to a single nutshell.

“Your smartphone contains two very fast processors: one for computing, and one for graphics,” said Sweeney. “But they’ve historically been connected by OpenGL, a layer of software that dates back to the early 1980s.”

“Vulkan provides a much faster connection between computing and graphics, bringing technology that was originally developed for high-end game consoles like PlayStation and XBox to your smartphone.”

Below you’ll see a video which explains the collaboration between Samsung and Epic Games.

One question you, the reader, raised immediately after seeing that Epic Games would be collaborating with Samsung was as follows: Will this partnership with Samsung limit what can be done with Unreal Engine on other mobile devices in any way?

Sweeney responded to this question with a resounding “No!”

“Samsung is just the first, and this partnership is aimed at blazing a trail forward and showing the world that this technology is ready for prime time.”

Expect a whole lot more from your next smartphone in the near future. Unreal Engine and Vulkan are paving the way for your smartphone to deliver graphics the likes of which you’d never have expected to see on such a versatile platform.