TikTok is not banned in America yet, but November is near

Donald Trump signed a Presidential Executive Order last week to ban TikTok from operating in the USA. On Sunday night, Judge Carl Nichols of the US District Court for DC issued an injunction on the matter. With this injunction in place, TikTok is not banned from your phone or any app store for several reasons. One of these reasons was: Donald Trump didn’t have the authority to ban this app in the first place.

Is TikTok going to be banned in the USA?

The executive order of which we speak today is Exec. Order No. 13942, Addressing the Threat Posed by TikTok, and Taking Additional Steps To Address the National Emergency With Respect to the Information and Communications Technology and Services Supply Chain, 85 Fed. Reg. 48637 (“TikTok Order”).

SEE TOO: Trump to ban TikTok and WeChat if they don’t sell to US companies in 45 days

The executive order called upon IEEPA, the International Emergency Economic Powers Act. With this act, Trump declared a national emergency regarding the “unrestricted acquisition or use in the United States of information and communications technology or services . . . supplied by persons owned by, controlled by, or subject to the jurisdiction or direction of foreign adversaries.”

*NOTE: The executive order itself did not list the prohibitions to TikTok (or WeChat**). Instead, it called upon the United States Secretary of Commerce to identify “prohibited transactions within fourty-five days.” The list of prohibitions was published on September 18, 2020. (Subsequently edited and republished with a date change from September 20th to September 27th).

On September 27th, the first prohibition would have gone into action as part of the executive order via the list created by the Secretary of Commerce on September 18, 2020:

**WeChat is being handled separately from TikTok in court actions – we’ll know more about their fate soon.

On November 12th, additional prohibitions go into action as part of the executive order: 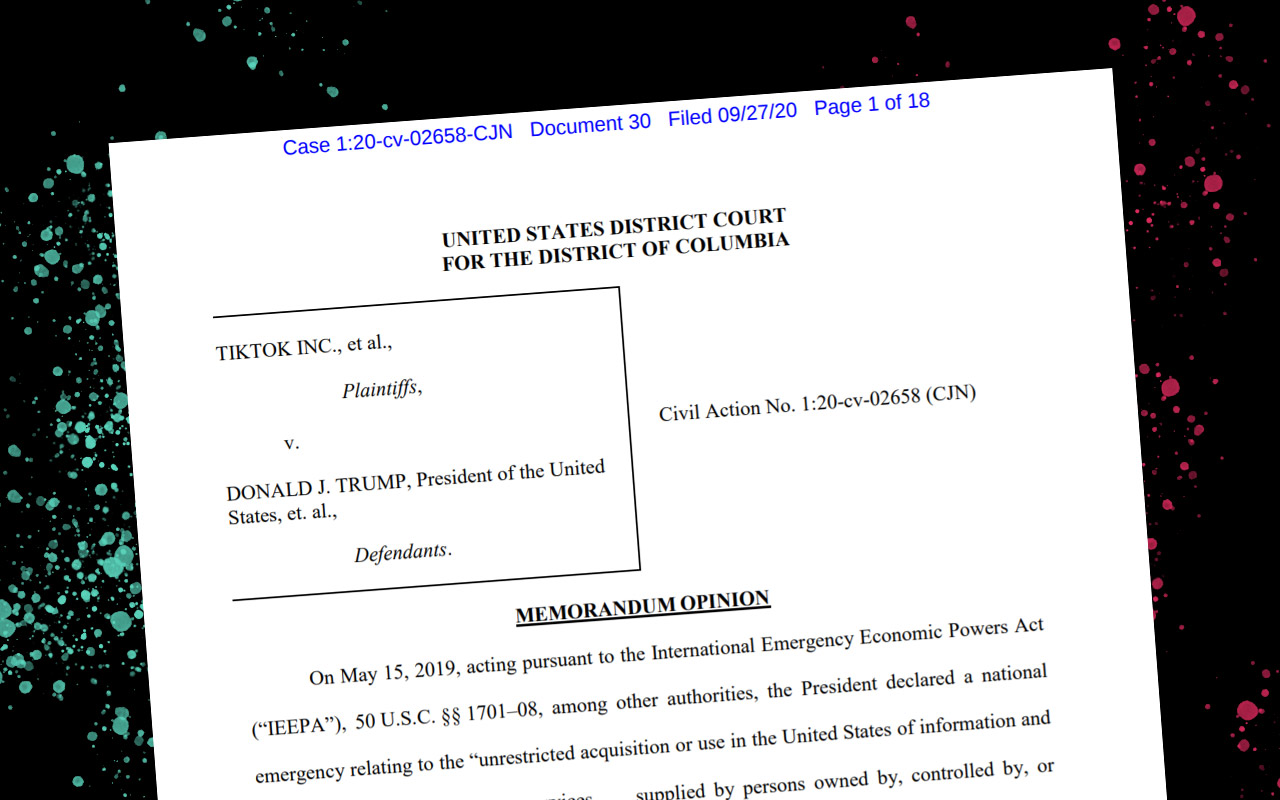 What did the first injunction do?

The first of five prohibitions* listed by the Executive Order was set to go into effect at the tail end of the day on the 27th of September, 2020. The injunction granted on 9/27 stopped said prohibition (the banning of the app). As with most injunctions, the plaintiffs suggested that they’d likely suffer irreparable harm if the banning of the app were to go ahead – understanding that the plaintiffs have a “likelihood of success of their claims.”

This means that the judge saw sufficient evidence that the plaintiffs would be successful in proving that their property should not be banned at all – in this case, because Donald Trump likely does not have the legal authority to enact a ban of TikTok via executive order.

Per the injunction document Case 1:20-cv-02658-CJN Document 30 Filed 09/27/20, plaintiffs filed for an injunction alleging that the government’s actions violate the following:

1. The Administrative Procedure Act (Count One)
2. The First Amendment (Count Two),
3. The Due Process Clause of the Fifth Amendment.

And “exceed the President’s and Secretary’s authority under IEEPA (Counts Four-Six). They also alleged that the order violated “the Takings Clause of the Fifth Amendment (Count
Seven).”

With regard to calling upon IEEPA, the injunction suggests that IEEPA’s grant of authority “does not include the authority to regulate or prohibit, directly or indirectly,” the cross-border transmission of “information and informational materials.” The injunction goes on to assert that “At a minimum, then, the Secretary’s prohibitions “indirectly” “regulate” the transmission of “informational materials” by U.S. persons.”

As yet, the injunction does not stop the remainder of the prohibitions required by the Secretary of Commerce for the executive order. But given the wording of said injunction, it seems likely that – one way or the other – there’s very little chance TikTok will be removed from any app store or, indeed, banned from smartphones in the United States altogether.