Mercedes-AMG is no stranger to fast boats. The automaker has a dozen special editions under its belt now, but 2021’s may well be the most dramatic. Riffing off the potent 2021 AMG GT Black, the new Cigarette Racing 41’ Nighthawk AMG Black Series is an ocean-bound love letter to speed and high-tech engineering. As I found out on deck, though, it’s as much about feelings as it is technology.

If you were wondering – and I know I was – the “cigarette” part isn’t because of the shape or some arcane sponsorship legacy. Instead, it’s a nod to the original intention of these “go-fast boats” for smuggling during the American Prohibition era. Fast and difficult to spot, never mind track, they were the transport of choice for those looking to bring fresh and not-exactly-legal supplies to the mainland. 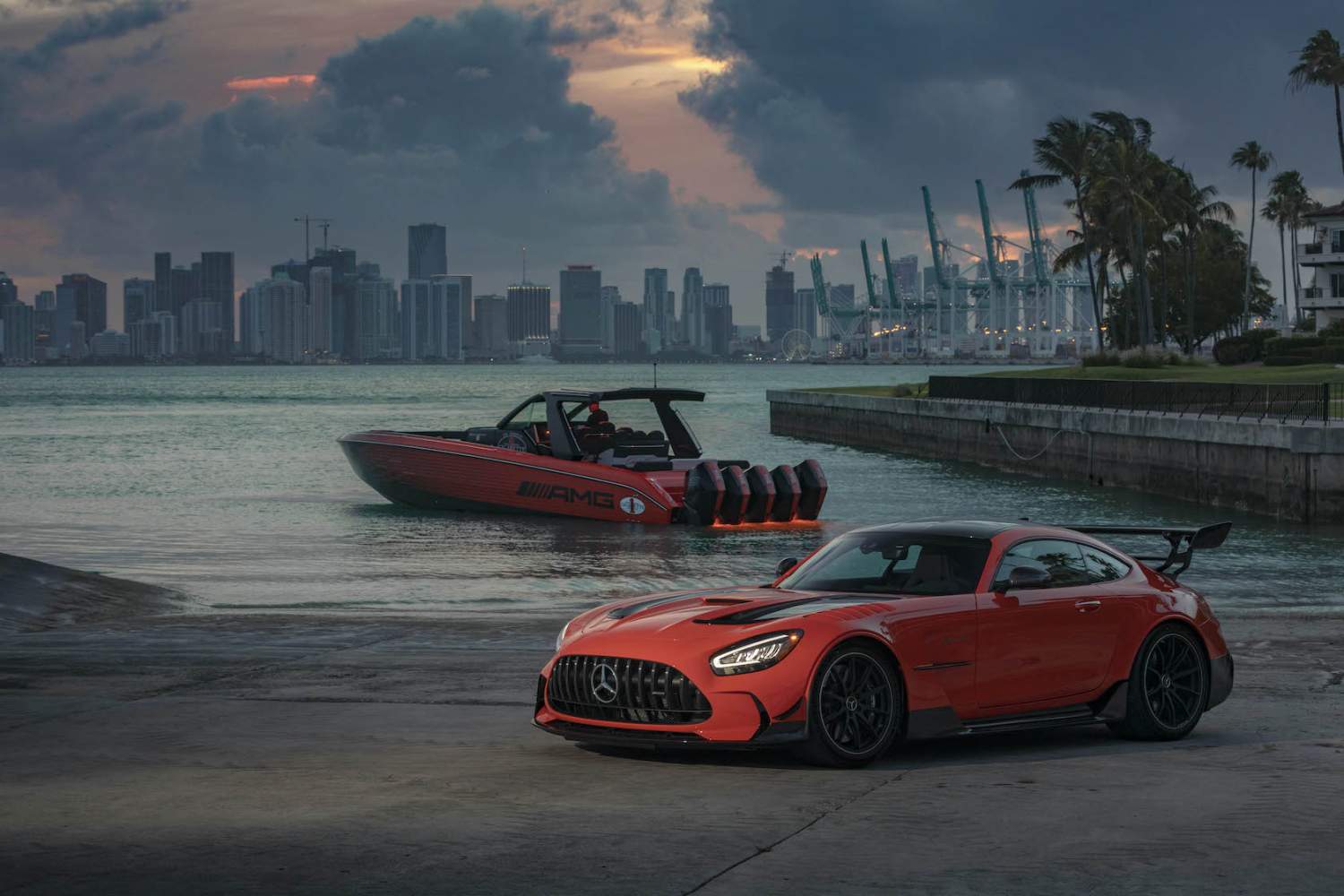 This time around, it’s AMG Black not the black market that’s benefiting. The new AMG GT Black – the tuning division’s most powerful production car so far – is the inspiration and, if one was really needed, excuse for building another ridiculously fast boat. 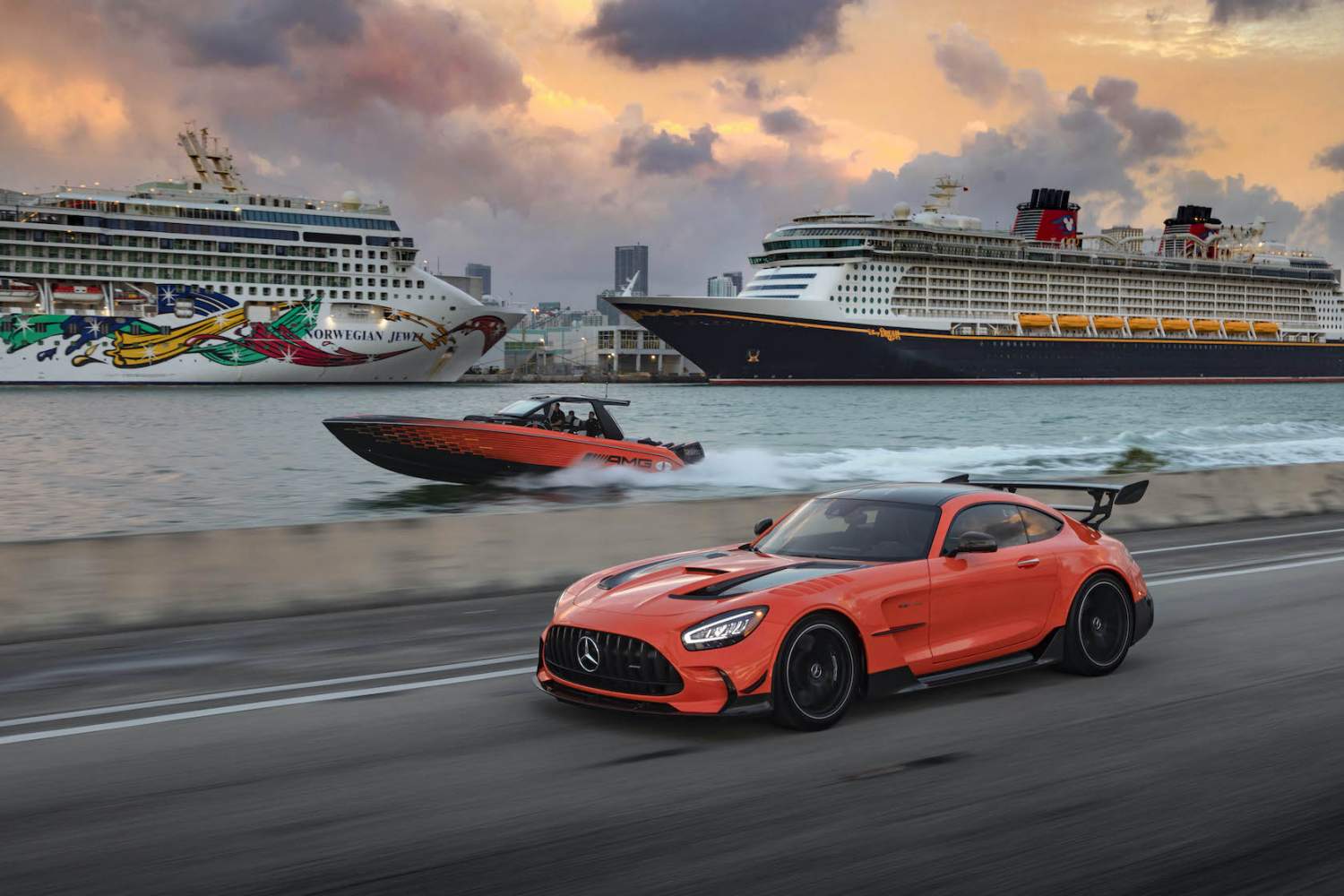 Last year it was Cigarette Racing’s 59’ Tirranna AMG Edition which twisted Vincent’s face into comical contortions, complete with 2,700 horsepower and a top speed of 80 mph. For 2021, Cigarette went smaller, though the result is no less shocking in its power numbers. The Cigarette 41’ Nighthawk AMG Black Series wields five engines for a hefty 2,250 horsepower.

That may be lower than the larger craft, but the top speed actually climbs: over 90 mph, if you dare push it that hard. Each of the quintet of outboards is a 4.6-liter V8 Mercury Racing 450R, making the Cigarette 41’ Nighthawk AMG edition the first in its series to have five of the 450 hp engines. 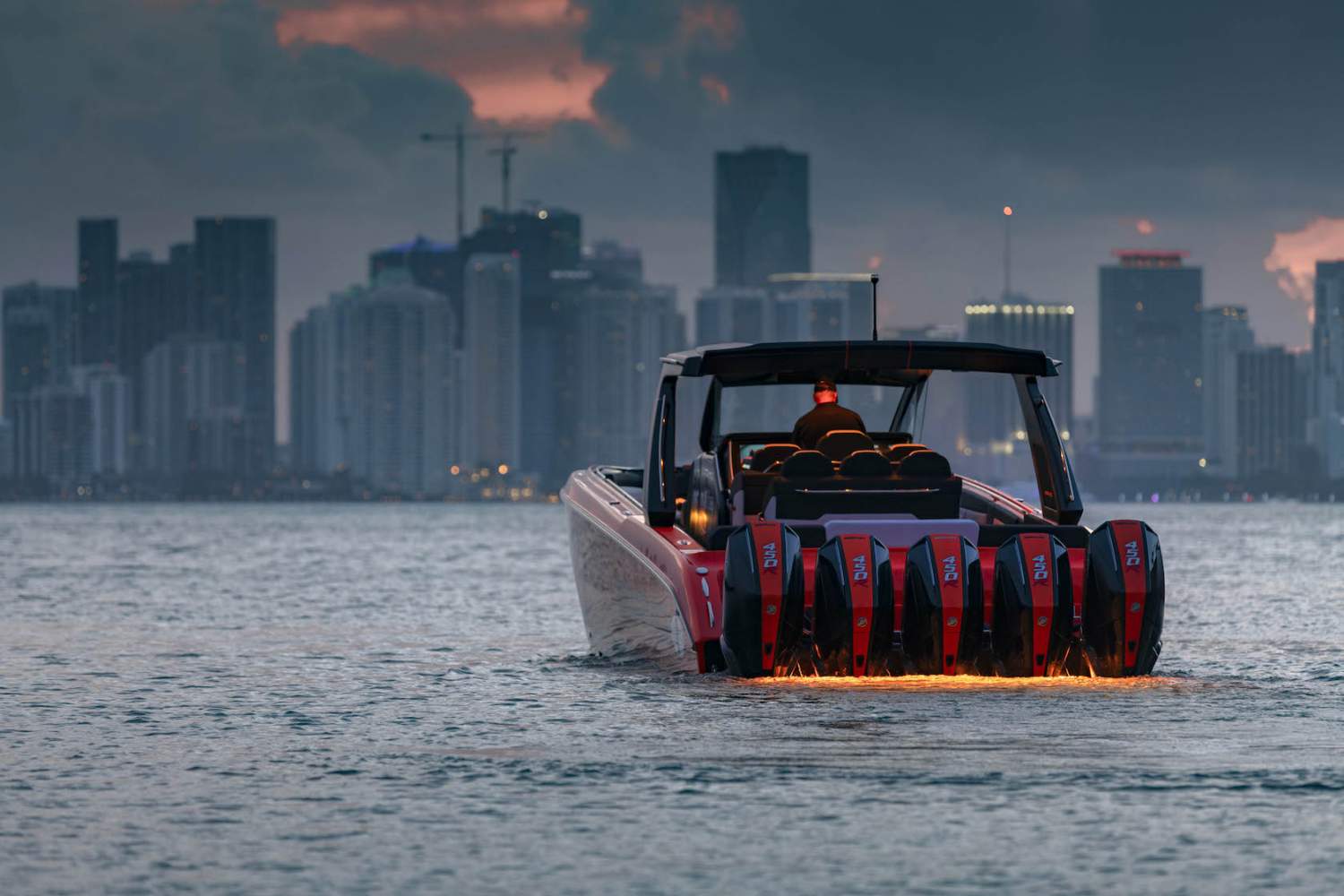 Of course, strapping a fistful of power on the back isn’t enough to make a good racing boat: there’s engineering to go with the excess. A new shadow throttle system, for example, means that all of the engines can be controlled with two levers, paring back the complexity for the pilot. There’s a unique twin-step hull design, too, with a completely carbon-fiber deck and an entirely carbon-fiber hardtop.

The result is a lower center of gravity, lending the Cigarette 41’ Nighthawk AMG edition the stability you want at high speeds, and the handling poise for when you run out of straights. Despite all that, there’s still space for more than ten people. 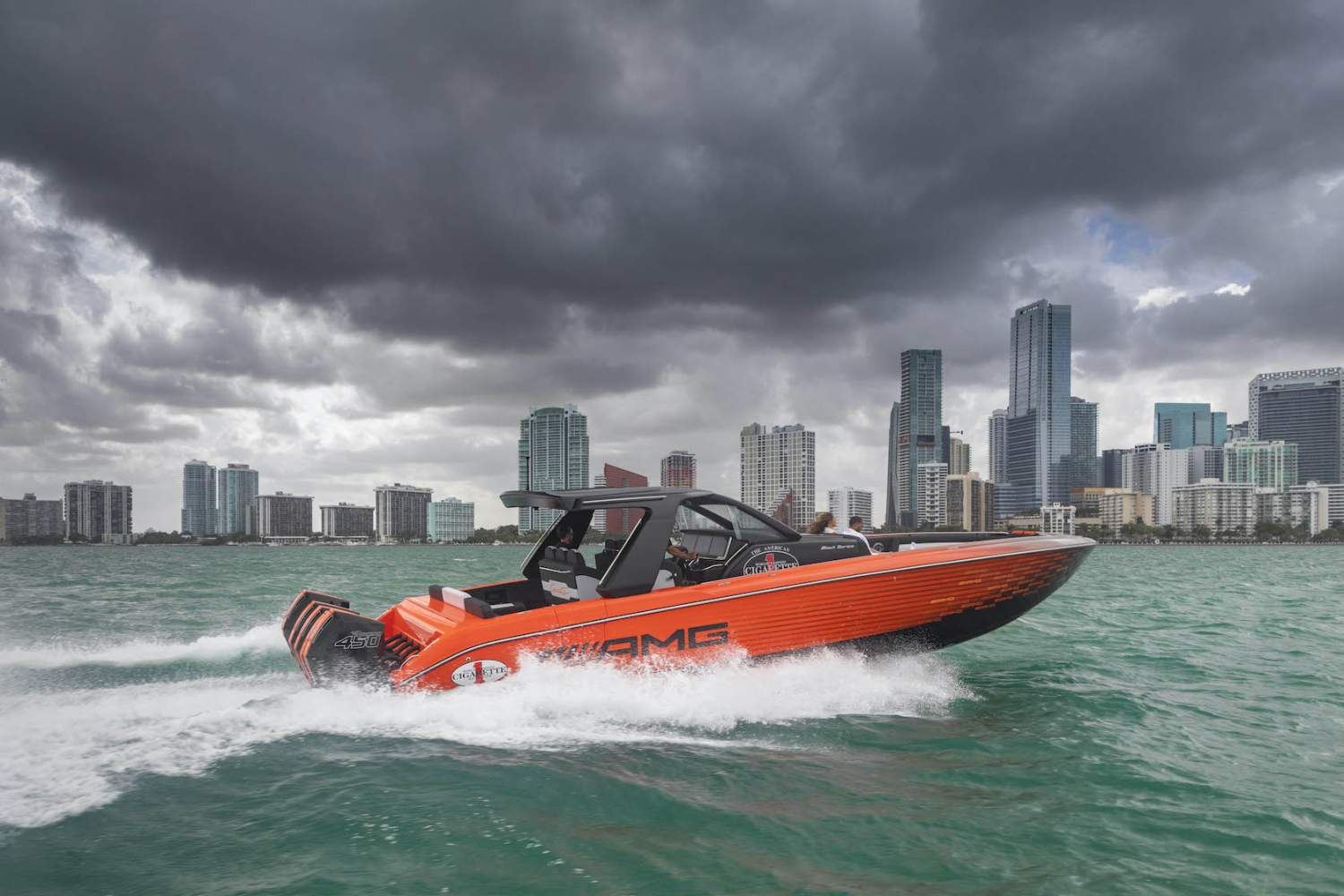 Pick, then, your very best friends to invite aboard, and make sure they’re comfortable with attention. Cigarette Racing took inspiration from the AMG GT Black Series’ exclusive Magmabeam exterior color, and the resulting black and orange paint job is unmistakable. Hand-painted AMG logos are evidence of the attention to detail that’s required to compete in the rarified performance boat space.

Onboard, there’s a central console with the helm and cabin, and the orange highlights are a little more restrained: more of a detail hue, atop the mainly gray and black color scheme. Again it’s practicality mixed in with style: the upholstery is so-called Cigarette Cool fabric, which better dissipates heat so that the seats are comfortable even in blazing Miami sun. 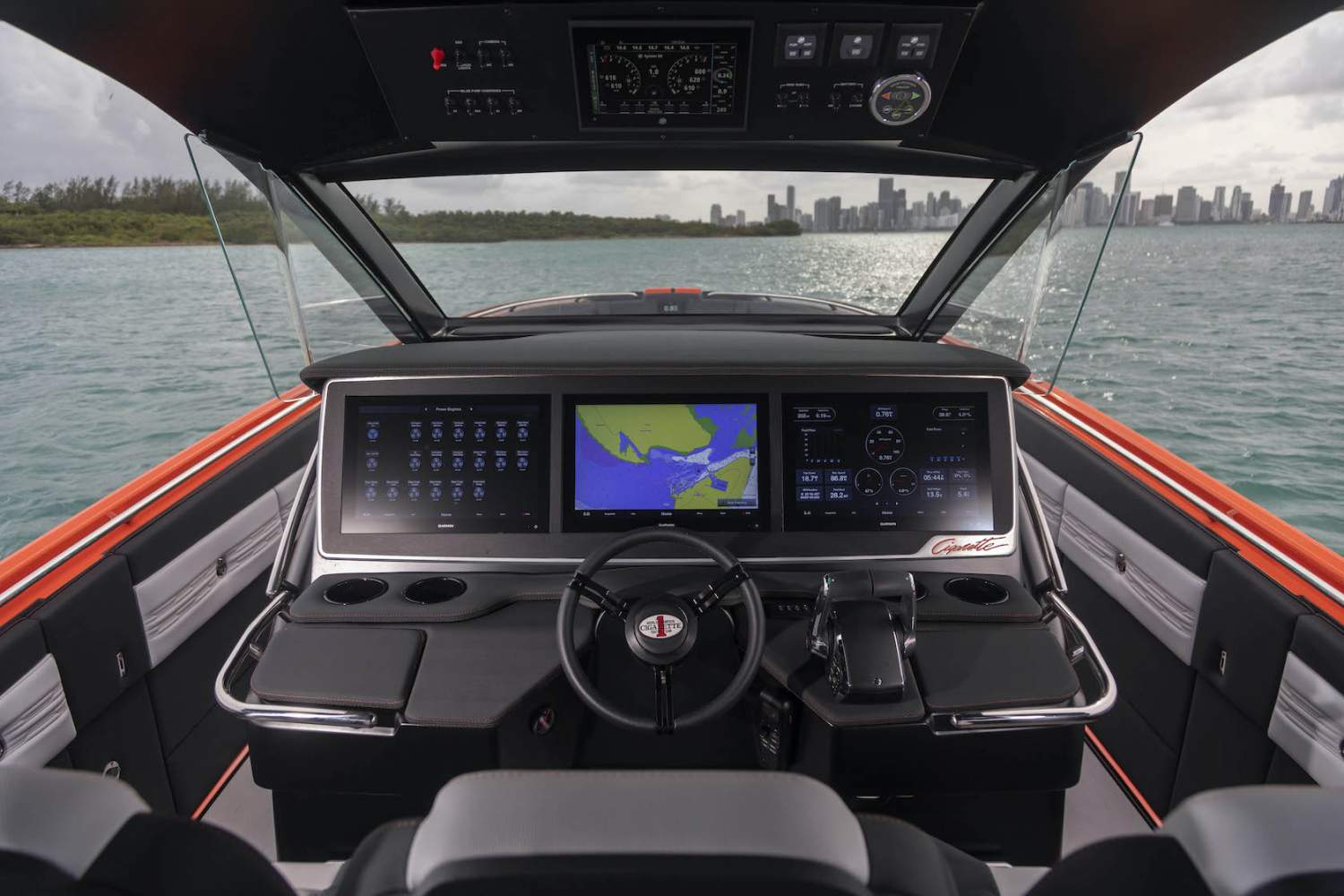 At the front are two rows of trio seating; an L-shaped lounge at the rear and U-shaped bow seating means there’s no shortage of vantage points for speed runs or more casual cruising. For the latter, there’s an Audio Marine audio system and ambient lighting, plus secondary Garmin displays to allow passengers to see the course plotted by the three Garmin 8617 multi-function displays in the solid aluminum helm.

Neither Cigarette Racing nor AMG were particularly inclined to let me put on my captain’s hat and take the controls, not that I can say I blame them. Only one of the 41’ Nighthawk AMG Black Series is being built, and it’s already sold. 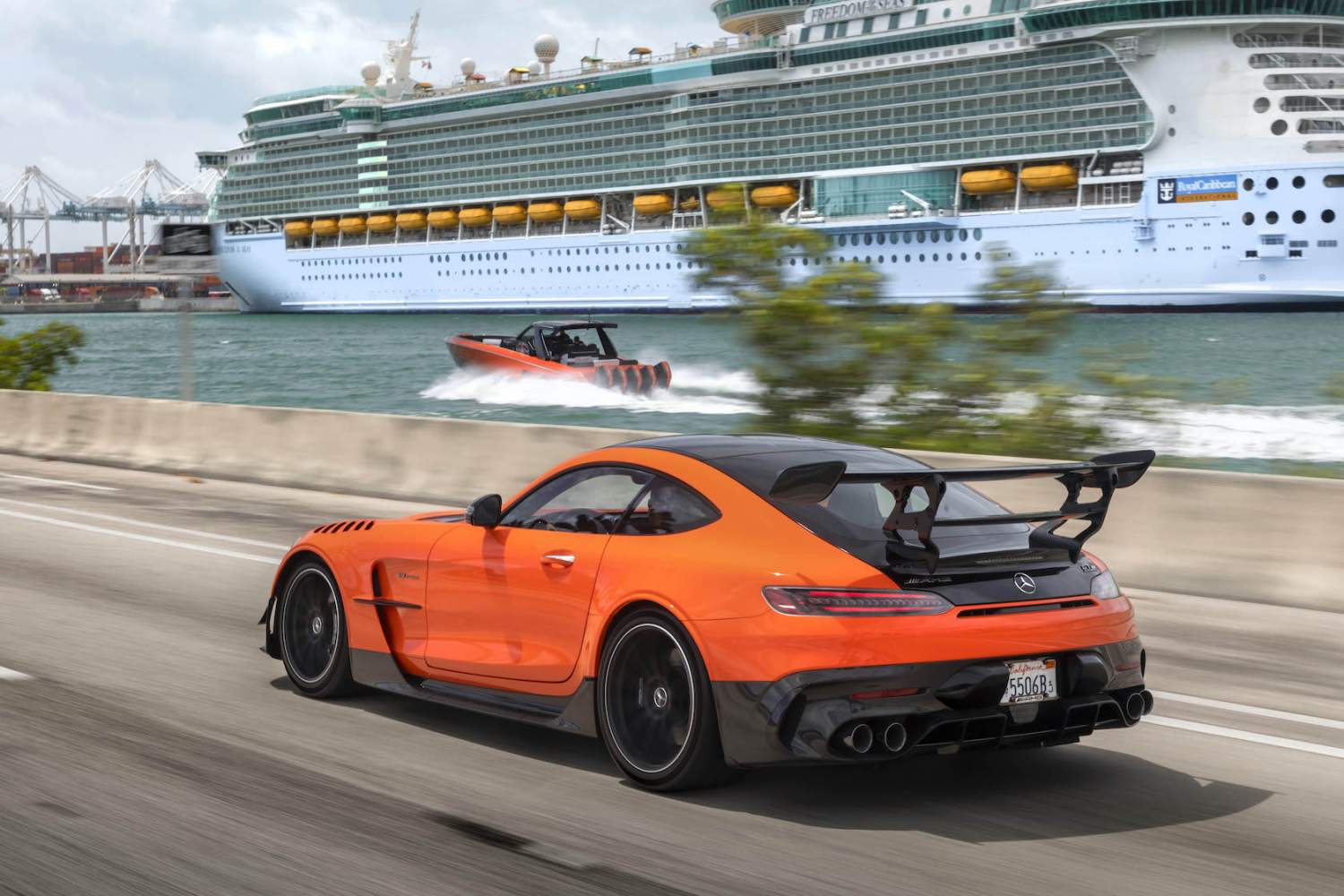 Life seems faster on water. I may have spent the previous day pushing the AMG GT Black around the track, the speedo hitting three-digits as the automaker’s latest model proved just how flexible and forgiving it is, but lower speeds on a boat are oddly more impressive.

Part of that is the impingement of the elements and physics. The wind hammering past as you cling to the stainless steel grab bars; the way that the water underneath you suddenly feels more like a long stretch of ice atop which the boat is sliding. 72 mph seems to be the magic number: after that, the rush of air escalates until it’s 90-percent of what you can think about. We hit, according to the screens, just over 86 mph. 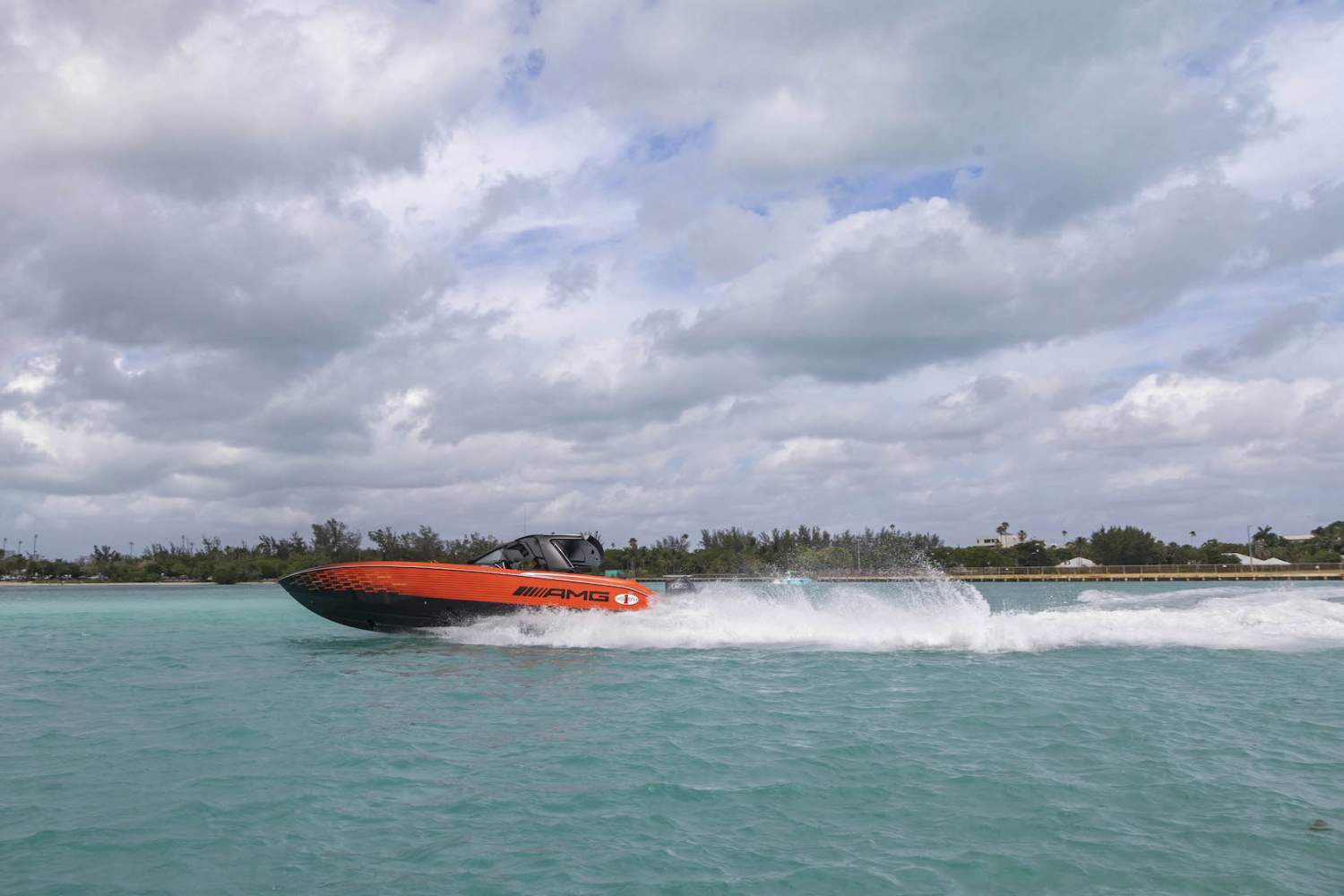 It’s a visceral, wowing experience, though you don’t really feel unsettled until you hit the cross waves. Then it’s the sudden tilt, side to side, which reminds you that you’re in an inherently unstable situation. I’ve no doubt the Nighthawk AMG Black Series could handle much worse, but I’m not sure my landlubber’s legs are made for it.

This is no barebones song of speed and nothing else, though. The multifunction space inside – your bathroom, communications hub, storage space, and a bed too – is small but perfectly finished. It feels like some sort of futuristic capsule hotel. 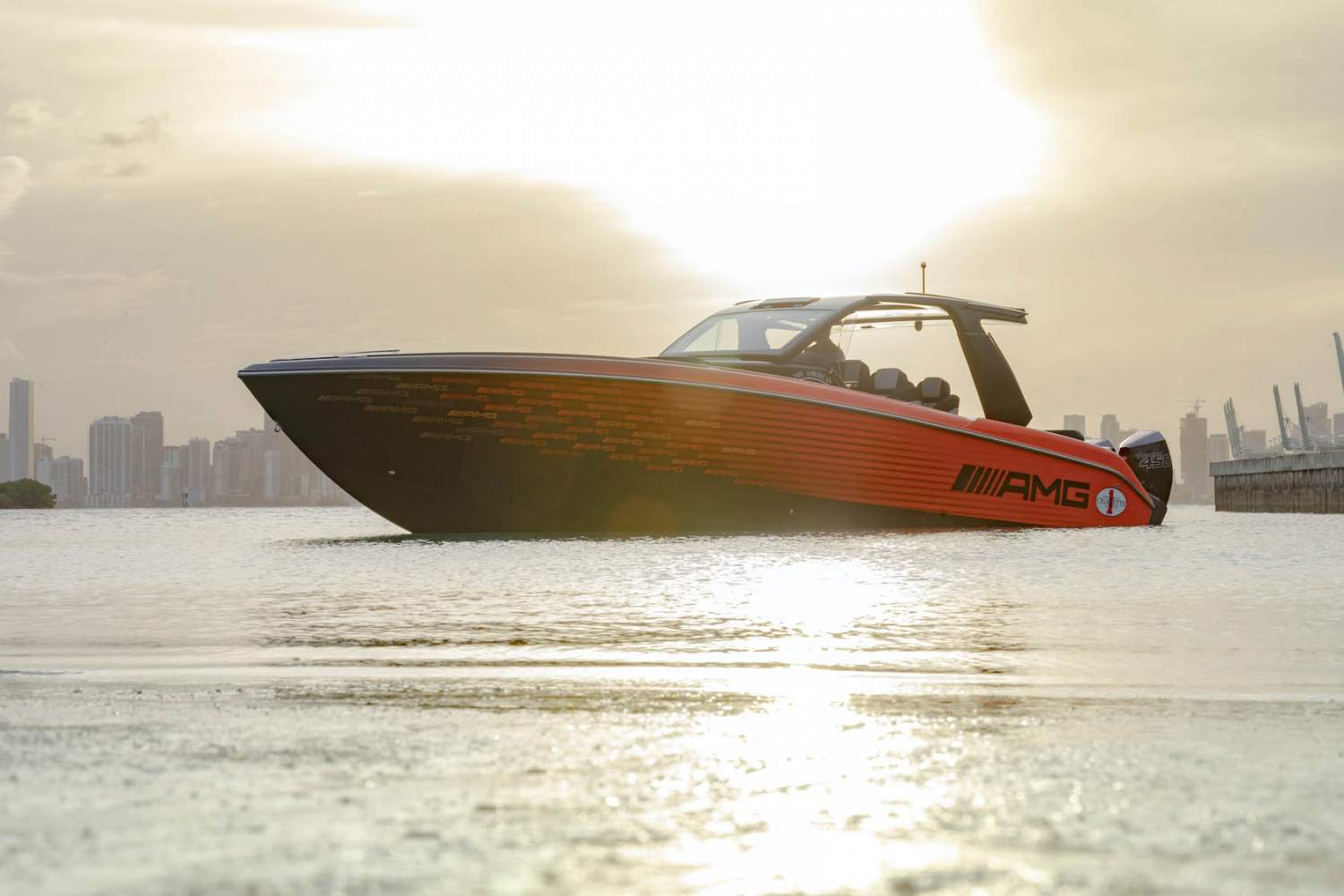 Cigarette Racing isn’t saying how much the boat costs, though a regular ’41 Nighthawk isn’t much shy of $900k and the engines alone are $50k apiece. By the end of July it’ll be headed to Haiti, to be delivered to its unnamed new owner. Judging by the number of heads that turned to watch as the special edition slipped through the Miami waters they’ll get no shortage of attention, regardless of how fast they might be going.