This is the 2020 Corvette Stingray C8

This is it: the 2020 Corvette C8, the eighth-generation of Chevrolet’s icon and the culmination of decades of rumors of a mid-engined sports car from the company. Leaked, rumored, teased, and prompting arguments across the board, the 2020 Corvette Stingray will launch with 495 horsepower from a 6.2-liter V8 LT2 engine.

Rather than up under the hood of the car, as per the last seven generations of Corvette, the 2020 Corvette C8 puts its LT2 directly behind the driver and passenger. Peak horsepower arrives at 6,450 rpm – when the car is equipped with the performance exhaust that comes as part of the Z51 Performance Package – while the 470 lb-ft of torque reaches its peak at 5,150 rpm. The rev limit kicks in at 6,600 rpm. 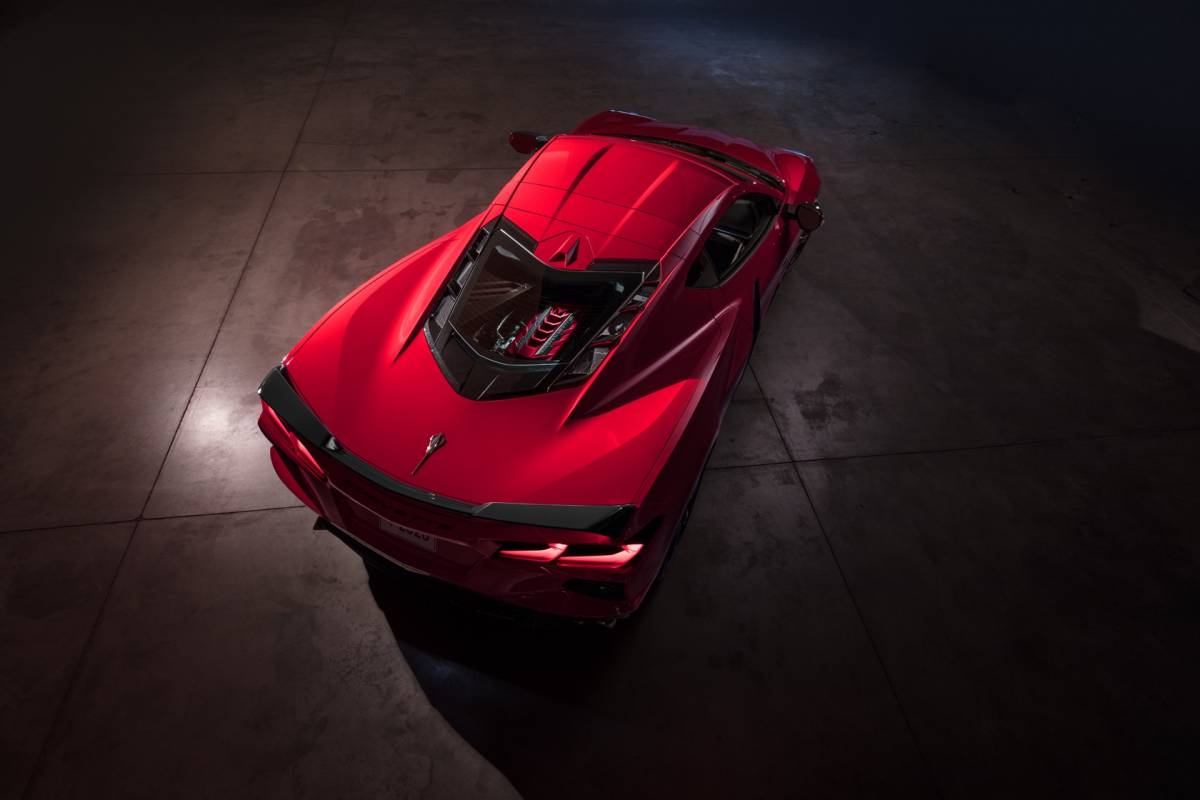 There’s no manual transmission option, a decision on Chevy’s part which is likely to infuriate purists. Everyone else will probably get on just fine with the M1L 8-speed dual-clutch DTC gearbox, handiwork of Tremec. With the Z51 Performance Package, Chevrolet says this should be the fastest entry-level Corvette ever, capable of doing 0-60 mph in under three seconds.

Straight line speed is only part of the equation, of course. The big question is how the 2020 Corvette Stingray will handle, and that’s down to a number of factors. Not least is the suspension, which will be coil-over for each wheel as standard. The Z51 package will add struts with manually adjustable spring perches; you’ll also be able to add Magnetic Ride Control 4.0.

The new engine position helps, too, mind. Chevrolet says that it makes for better weight distribution, putting more heft above the rear wheels and thus improving traction. It also means the cabin can sit further forward – more than 16-inches, in fact – moving the driver closer to the front axle. 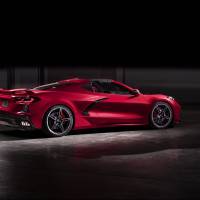 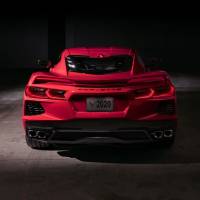 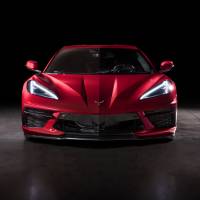 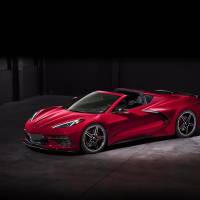 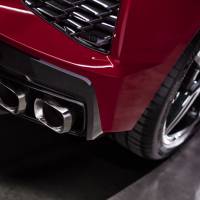 The same four drive modes as before will be carried over to the new Corvette. However there’ll also be a new option, Z-Mode, which offers instant access to a custom configuration. Drivers will be able to tweak everything – from throttle control, to steering feel, and more – and then store those settings to a single button.

Speed won’t be enough to sell the new Corvette, however. It also needs to be stylish, up-to-date with technology, and – yes – a little practical, too. The former is subjective, of course, though Chevrolet has done a reasonable job making it look like, well, a Corvette, despite the extreme platform change. The front has hints of Ferrari, while there’s a little NSX in the profile; the rear even offers a touch of Lexus.

It all works well, though, even if it’s probably going to be fairly color-dependent. On the practicality front, the engine’s move means Chevrolet had space for a front trunk, but the rear is still capacious enough for a pair of golf bags. That’s the sort of flexibility that existing Corvette owners are used to, and something Chevy really couldn’t sacrifice in the eighth-generation car.

As for the cabin, there are removable roof panels and what’s likely to be a controversial dashboard. Just like we saw earlier in the day, the 2020 Corvette’s dash is a major departure from the outgoing C7 car, with strongly divided driver and passenger spaces, and a “squircle” steering wheel. The driver gets digital instrumentation, while there’s a second, 12-inch tablet-style infotainment screen sharply canted to face them too. 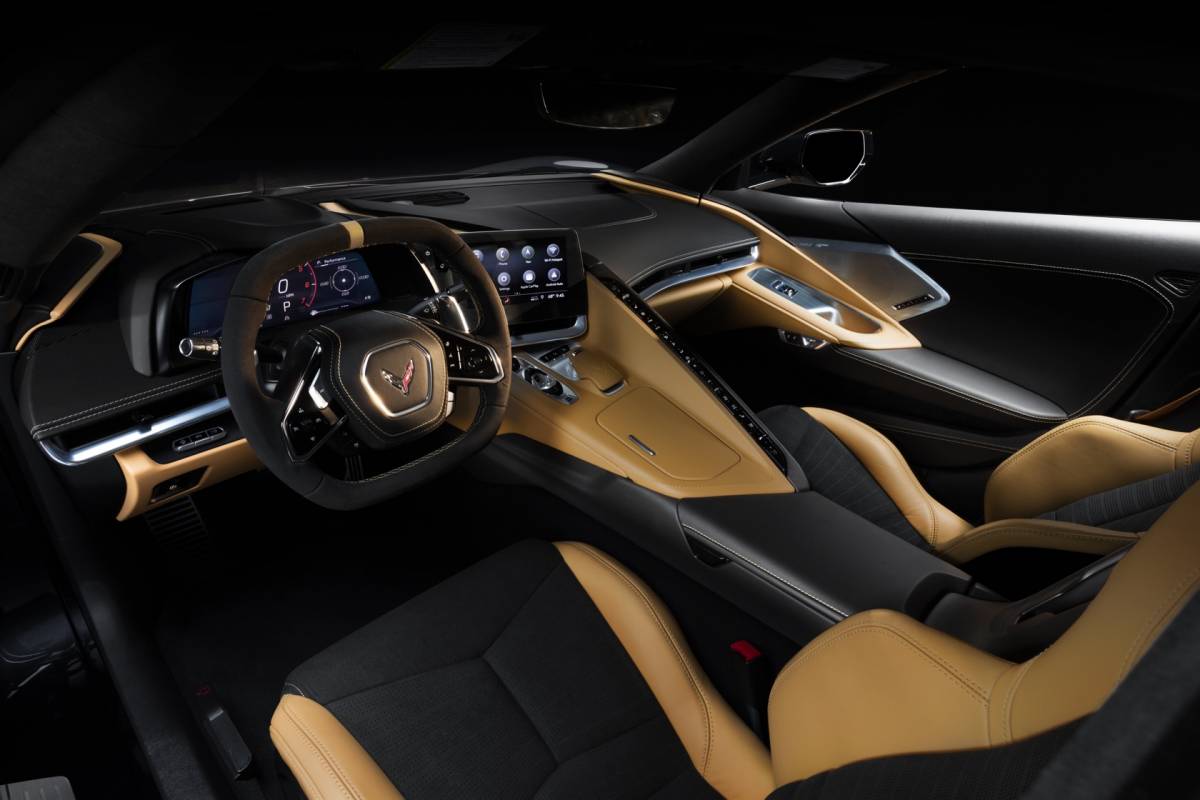 That’s running Chevy’s latest infotainment platform, while beneath it the center console has the transmission selector buttons. If you want to take over manual control, you’ll need to start clicking the metal paddles.

Most striking is the bar of HVAC buttons that runs down the center spine of the console. That has all the controls for the heating and cooling, as well as the seat heaters and such. Physical buttons are certainly popular – we’re pleased to see the C8 found space for a volume knob, too – but the layout looks like it could be a little complex to use while on the move. 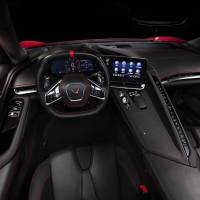 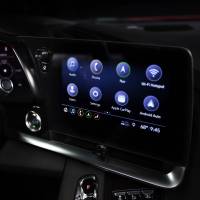 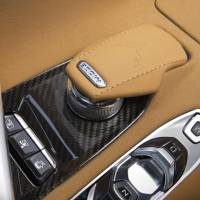 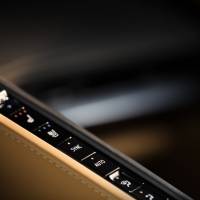 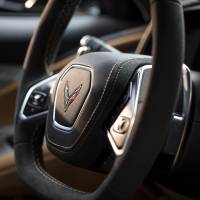 There’ll be three seat options. The standard will be the GT1, which is focused on everyday driving. Alternatively, there’ll be a GT2 seat which is more supportive for enthusiastic driving, while the Competition Sport seat will throw in lashings of lightweight carbon fiber and be targeted at Corvette owners taking their C8 to the track.

Chevy hasn’t stinted on tech, either. There’s an optional nose-lift, for raising that front spoiler up to get over curbs and steep driveways, and it’s GPS connected. Get to a location where you need to lift the nose, and the new Corvette can be programmed to automatically do so while you focus on steering. Up to 1,000 saved locations will be supported, and the C8 will automatically prompt you to store one whenever you manually trigger the lift.

Another option will be the Performance Data Recorder, which can now double as a dashcam. On the track, it’ll combine the course with an overlay showing your performance and related metrics.

The biggest question is actually two questions: when, and how much. The former, Chevrolet says, is a fairly broad window, with the 2020 Corvette set to go into production late this year. It should go on sale shortly after that, the automaker promises. There’ll also be a right hand drive version, which is a first. 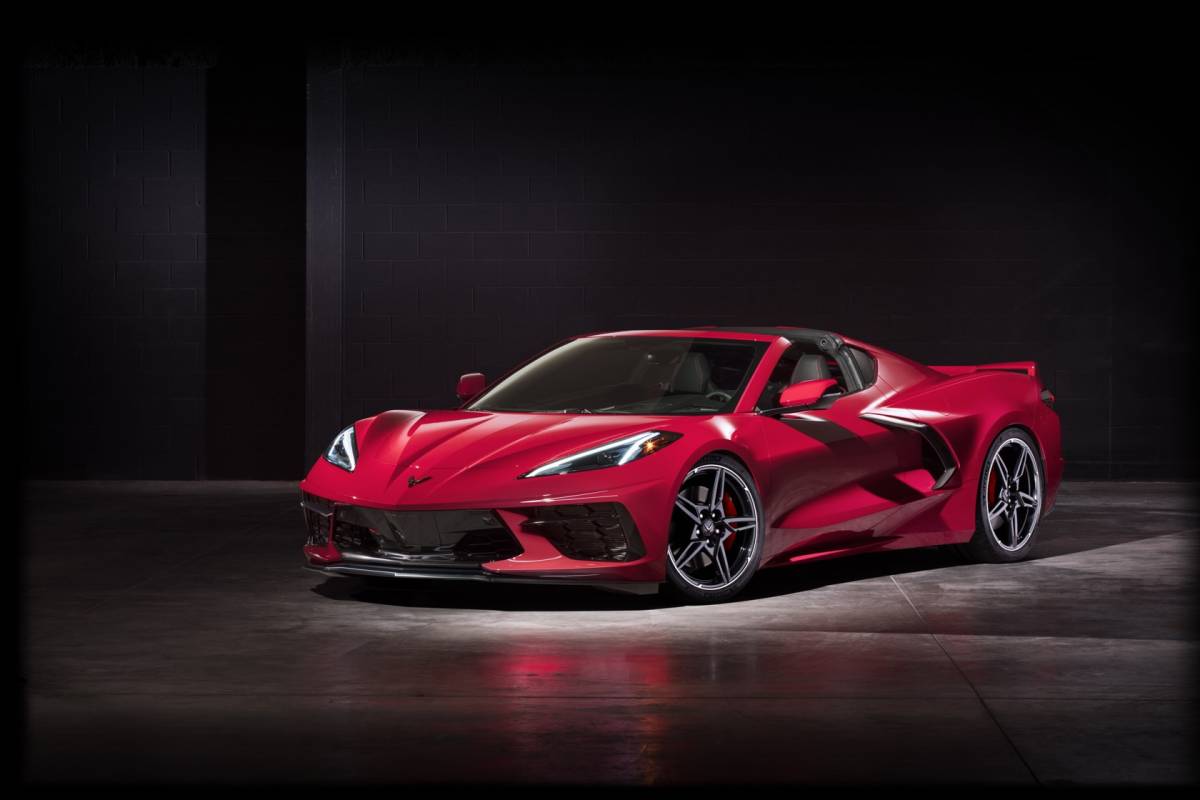 As for how much it’ll set you back, so far Chevrolet is playing that detail close to its chest. We’re expecting an increase over the $57k starting price of the current Stingray, but the automaker promises that when it goes on sale it will still be under $60,000. That should carry forward the value proposition that Corvette has always stood for, and reservations are opening from today.