This could be Apple’s brilliant new iPhone 6 cable

There’s an old joke that USB cables have in fact three orientations, because no matter which way you turn them they never plug in properly the first two times, but Apple looks to be addressing that with its latest Lightning cables. After patent filings for a two-way reversible USB connector surfaced last week, now the cable itself appears to have leaked.

The above image, provided to SlashGear courtesy of Sonny Dickson who has a strong track record of acquiring pre-announcement iPhone components and other parts, shows a new design of USB plug that could be slotted successfully into a port in either orientation. A second image, below, was shared by Dickson on Twitter and shows the improvements over a regular USB.

To achieve all this, the internal plastic and terminals within the plug have been modified from their usual. By slimming down the center portion and putting contacts on both sides, the new plug can make its required connections no matter which way up it’s facing. 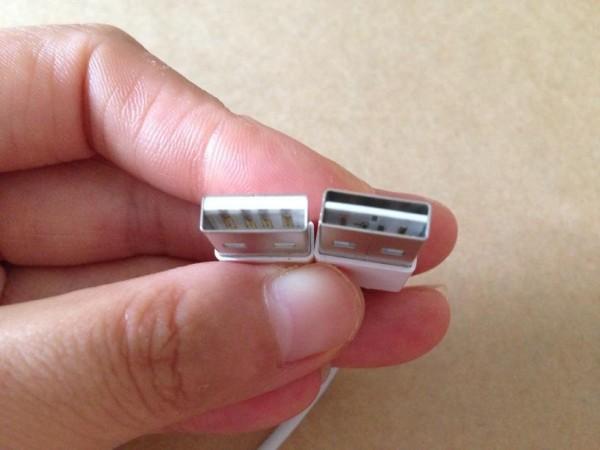 That’s just as the Apple patent suggests, and it could be a real annoyance-saver for anyone who has ever struggled to plug in a cable sight-unseen, such as when it’s behind a desktop computer or in an awkwardly-placed USB charger.

Apple had already addressed the device-side of the same issue with its Lightning connector, introduced on the iPhone 5. Moving away from the 30-pin Dock Connector of previous iOS devices, Lightning was not only far smaller but could be inserted either way, unlike microUSB which supports only one orientation.

Meanwhile, the specifications for USB Type C were recently finalized, a new faster, slimmer, and reversible standard, though it’s unclear when exactly the first examples will reach the market.

Although there’s no way of knowing for definite that these are Apple’s own cables, it would certainly be a convenient way of addressing a lingering headache that affects iPhone owners on an often daily basis. Here’s hoping there’s one in each iPhone 6 box when the new smartphone is launched, which we’re still expecting to happen early in September.