Released on a number of platforms at once, Thief is a game that – make not mistake about it – is about taking things that don’t belong to you. We’re looking specifically at the PlayStation 4 version of the game in this review – until you see specific notes about additional coverage – while the game is also coming to Windows, Xbox One, Xbox 360, and PlayStation 3. This isn’t the sort of game you’re going to want to play if you’re a big fan of short bursts of entertainment – this game is involved, and it requires your full attention for long spans of time.

To make things clear right off the bat, the latest entry in the “Thief” series of games has very little to do with titles produced in the past. With Thief: Thief: The Dark Project and Thief 2: The Metal Age produced by Looking Glass then Thief: Deadly Shadows produced by Ion Storm we had two unique looks at the basic theme of picking up and pocketing items in a series that’s now spanned 16 years. Here with Eidos Montreal we’re seeing development take Thief out a whole new door. 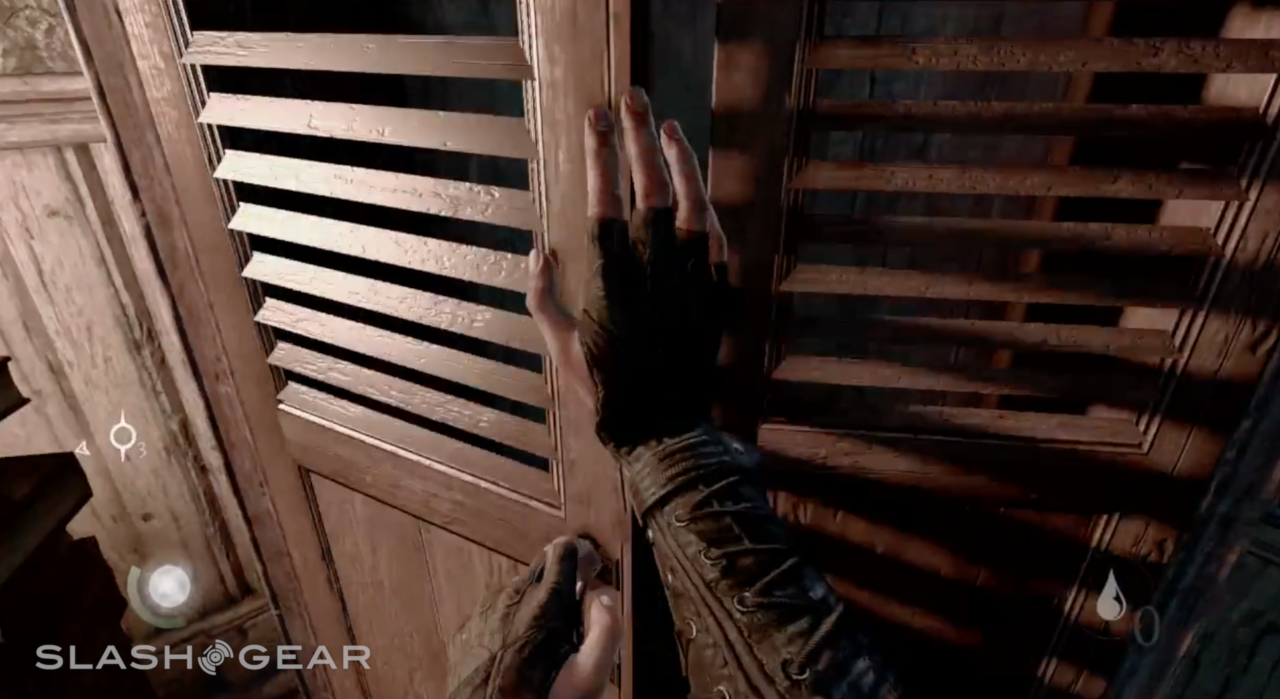 Graphics are high-end. This isn’t the sort of game where you’ll play and be blown away by the intense delivery – it’s much more about the shadows, as it were – but every platform we’ve seen it on has brought with it an impressive display. Have a peek at our CES 2014 hands-on experience with Thief on five high-definition displays with Radeon R9 290X graphics to see how massive this game can get.

Jumping in to this game after having played first person shooters for ages makes for an interesting experience. Gameplay is strange. It’s difficult to get used to the idea that pressing the X button doesn’t result in the main character, Garrett, jumping up. Instead, this game makes you reconsider how you go about exploring.

The way this game’s controls are configured makes it feel more like you’re piloting Garrett than acting as him. I imagine the same could be said for a person playing with more traditional controls for the first time. With such a massive number of games using essentially the same buttons for the same functions from a first-person view experience here in 2014, though, most users will find this game needing a bit more practice than the average title.

Garrett is a thief by trade. He’s got a lady friend whom he follows into peril early on in the game, a situation which leaves him with supernatural – or preternatural – powers. These powers unsurprisingly feed perfectly into the mission at hand, allowing Garrett to spot opportunistic points for climbing, spot items to steal, and fight more efficiently. 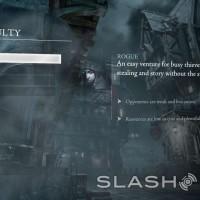 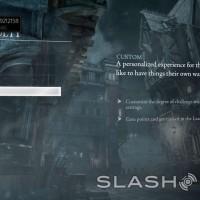 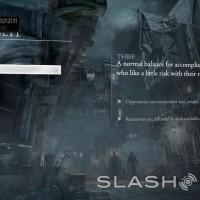 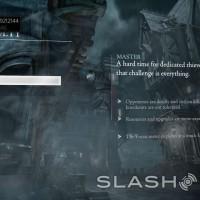 It’s important to note that you might only rarely be in a fight in this game, if that’s your chosen gameplay style. There are three distinct styles of play, each of which are considered with percentage points added up each chapter you move through. 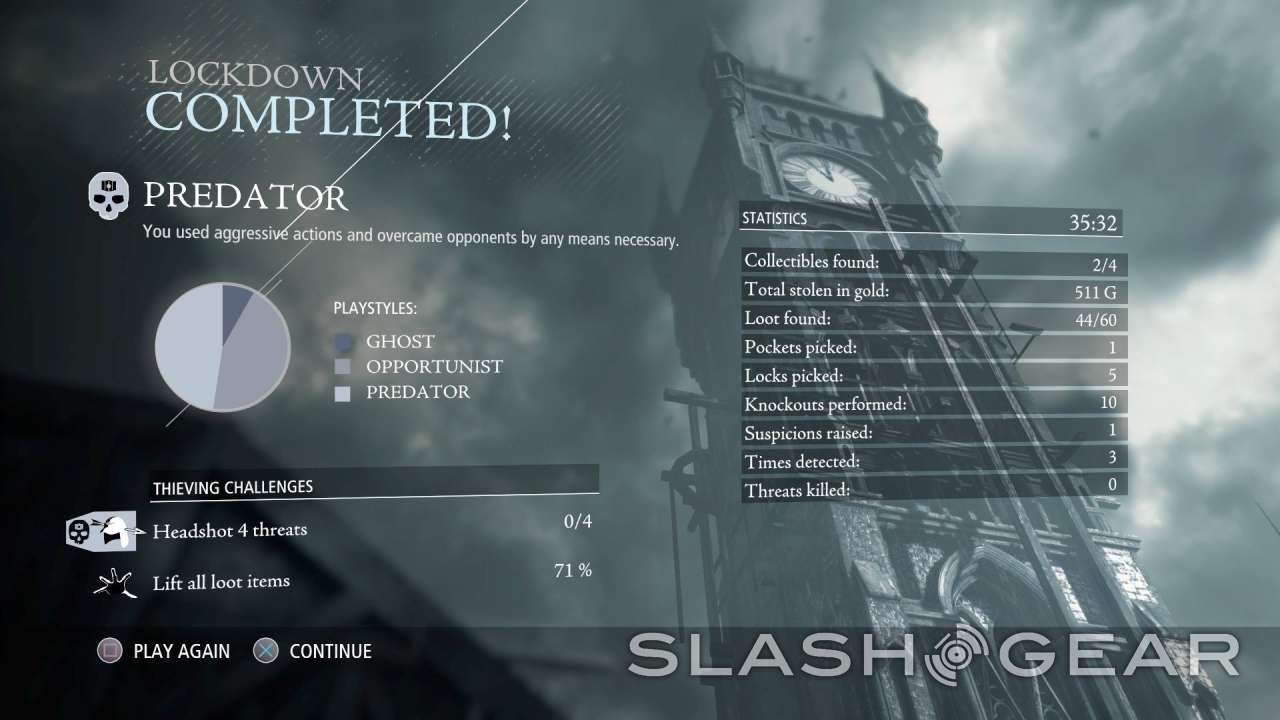 In addition to playing single-player offline, Thief allows you to compete and compare with friends, scoring points (effectively) for how well you accomplish a mission in your chosen style. If you’re terrible at stealth, like I am (not great for a thief), you’ll be labeled a Predator.

Other “play styles” include Opportunist and Ghost. Thieving challenges and statistics will help you understand how much of one or the other sort of Thief you are at each chapter marker.

ABOVE: While most of the time you’re working from a first-person perspective, there are times when you’ll pull back to control Garrett from afar.

This game is extremely linear. While buildings do have multiple entrance and exit points, the choices you make generally result only in you finishing a task in one amount of time or another or you picking up loot in a different order. If you’re all about picking up every single piece of loot you can possibly snatch, this shouldn’t bother you. 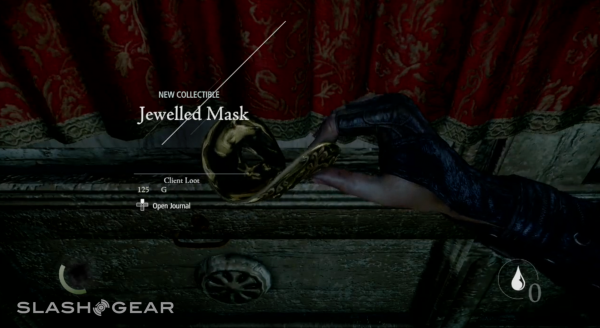 The plot line here has you facing off against a shadowy conspiracy against which you must fight to find your lost companion and save the world, more or less, against evil. You’ll do this by stealing things. Steal ALL the things.

Eventually you’ll get into doing tasks that have little to do with stealing, disarming traps here, avoiding detection throughout. The point at which this game becomes worth coming back to is in the customization of your experience you’re able to access. This comes through friendly goods traders who, for the cash you’ve stolen, will gladly trade you all manner of oddities for your journey. 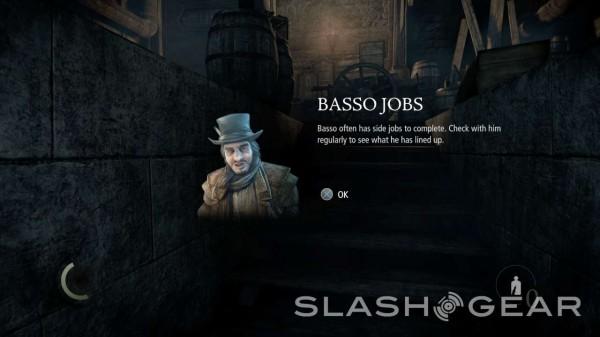 Stealing items that aren’t unique adds cash to your purse, while stealing unique items results in you having a bigger trunk full of unique items when you head home to your own personal clock tower. The premise is fun, and in practice it’s rather enjoyable to steal items as well as buy them with stolen cash.

What’s a bit less impressive is the voice acting and mixing of sound. At some points it’s difficult to hear what’s being said in the (sometimes too frequent) cutscenes, and at others the acting can be awkward and unrealistic. Where most of the environment here can be attributed to a general time in history, uses of words like “fricking” will throw you for a loop.

ABOVE: While you can certainly fight your way through this game, the odds are not in your favor. Being a thief here means sneaking around is much better for your karma.

Despite a few oddities, this game is extremely entertaining and addicting. Once you start stealing, you’ll have a tough time trying to stop. Getting used to the control scheme turns into a challenge we’ve ended up being glad to face, and the game feels like a positive experience each time we play.

While we did find some bits and pieces that weren’t especially great, this game turns out to be a very, very intriguing piece of media. You’ll be swallowed by the thrill of the lift, one way or the other.