Field of view might be the Achilles’ heal for augmented reality devices like Microsoft’s HoloLens, but better optics might be incoming to address that. Lumus brought its latest stereo-vision AR headset prototype, the DK-50, to CES this year, complete with two transparent eyepieces that give a digital upgrade to a significantly larger portion of your vision.

The DK-50, like Lumus’ previous products, use a tiny micro-projector in the arm of the glasses, and a light-guide that runs across each lens. In this particular case, each eyepiece is running at 720p resolution, and since you have a display for each eye you can have 3D graphics, too. 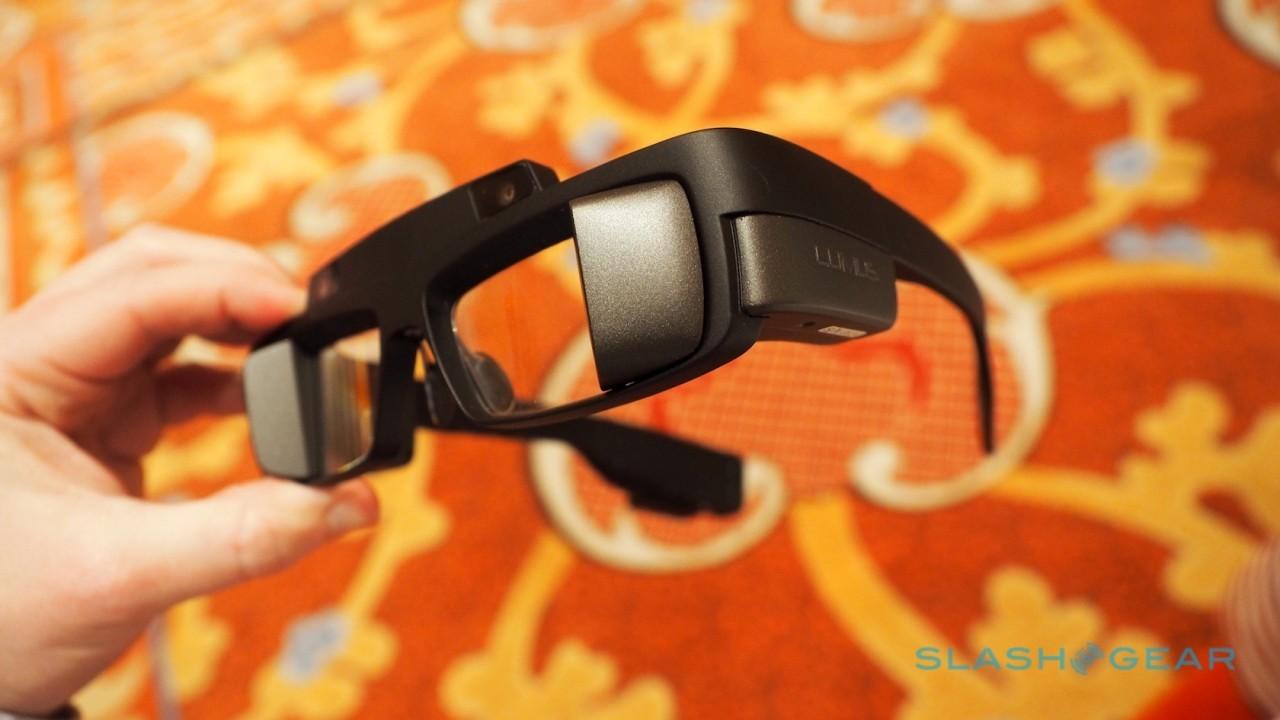 That certainly adds to the realism. Looking around while wearing the DK-50 glasses, I could see a three-dimensional heart floating in mid-air and rotating; that changed to an animated solar system, and then a car engine, also in 3D.

Even in a bright demo hall, the graphics were clear. In a second demo, a 3D dinosaur animation, a virtual jungle was played over the room around me: by shifting focus, I could choose whether to watch the film or engage with people physically present.

Neither of the demonstrations left me confused that the virtual graphics were real, but that could change with the DK-50’s second trick. Atop the frame is a stereoscopic camera array and an Inertial Measurement Unit (IMU), with an onboard Qualcomm Snapdragon processor running Android for markerless augmented reality. 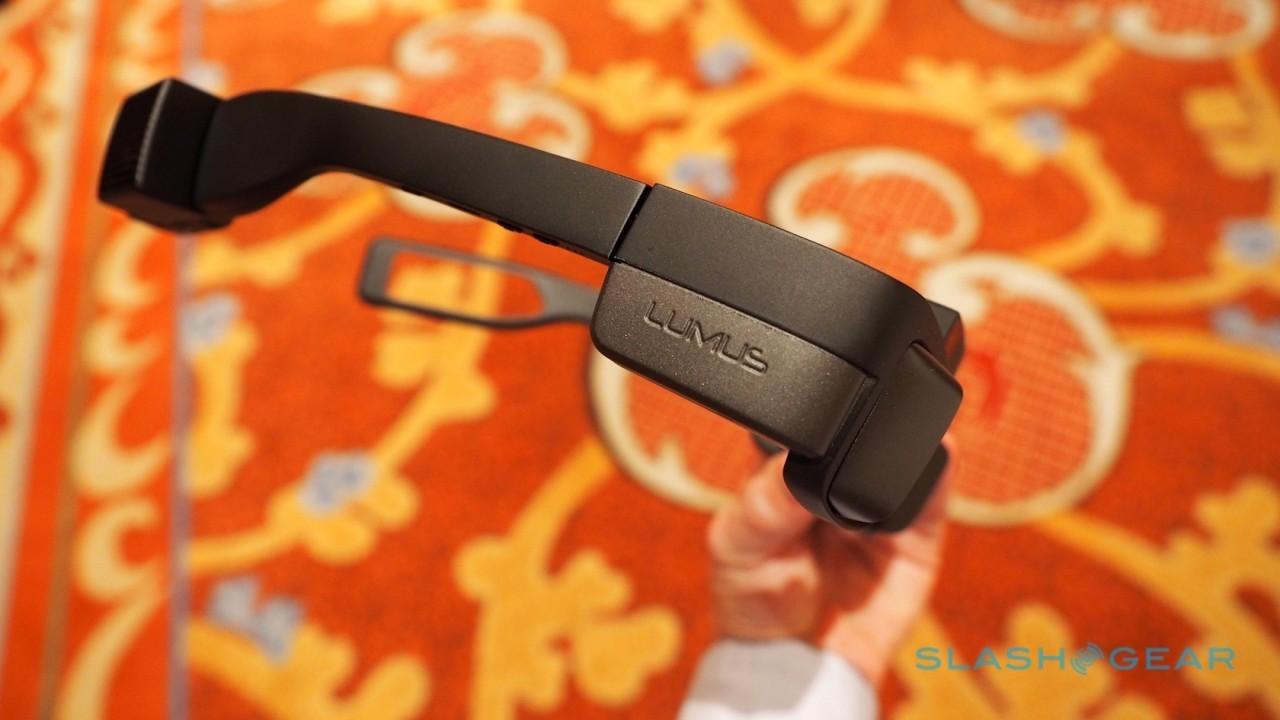 Unlike many AR systems, which require some sort of special glyph or 2D barcode in order to orient the virtual graphics on top of the real world, the InfinityAR system Lumus is using do the same but by identifying elements of the surrounding environment.

Unfortunately, Lumus’ prototypes weren’t up and running with the AR system so I wasn’t able to test that out. 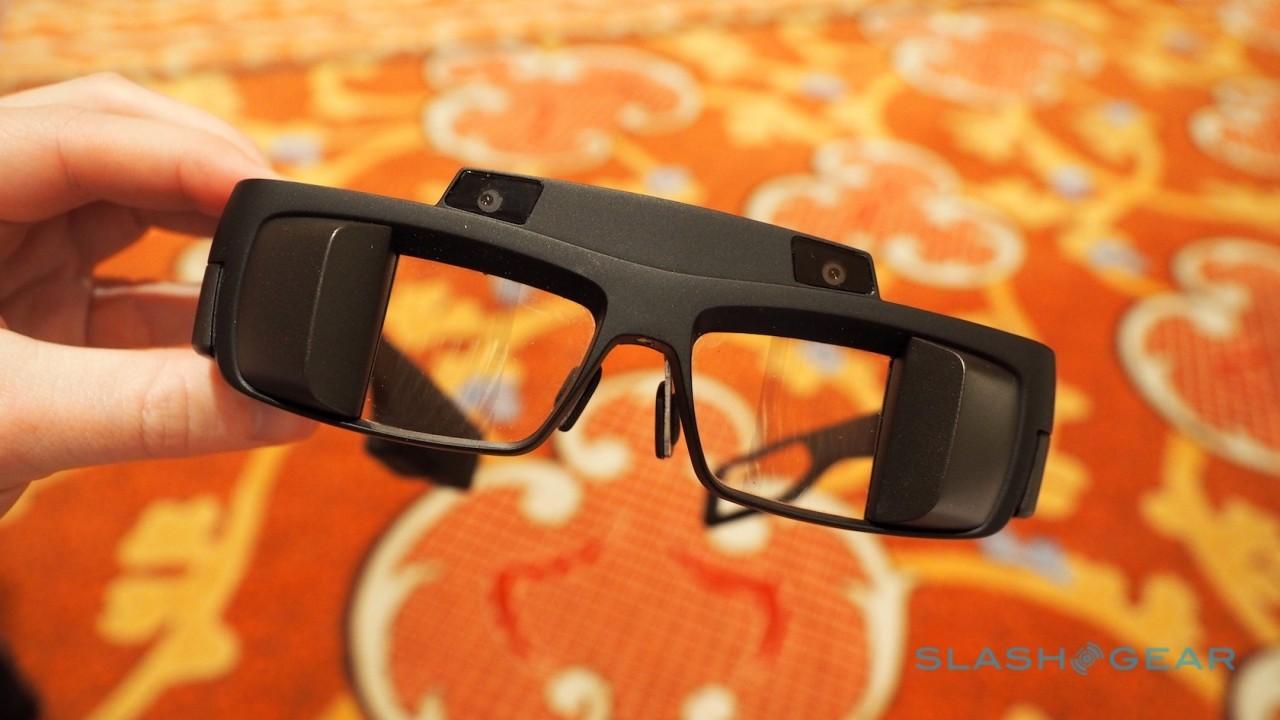 While the DK-50 will be sold as a development kit for would-be AR wearable manufacturers, it’s the Lumus displays that have plenty of potential for addressing common complaints in products like HoloLens.

That’s because of the field of view (FOV), or in other words the amount of your vision that the digital display covers. In the case of the displays in the DK-50, that’s 40 degrees: enough to occupy roughly the same sort of area as watching a big-screen TV from across the average room.

Importantly, though, it extends higher and lower in the field of vision than HoloLens’ 20 degree FOV displays did, something particularly noticeable – and intrusive into the AR experience – when digital objects suddenly clipped or disappeared as you turned or nodded your head slightly. 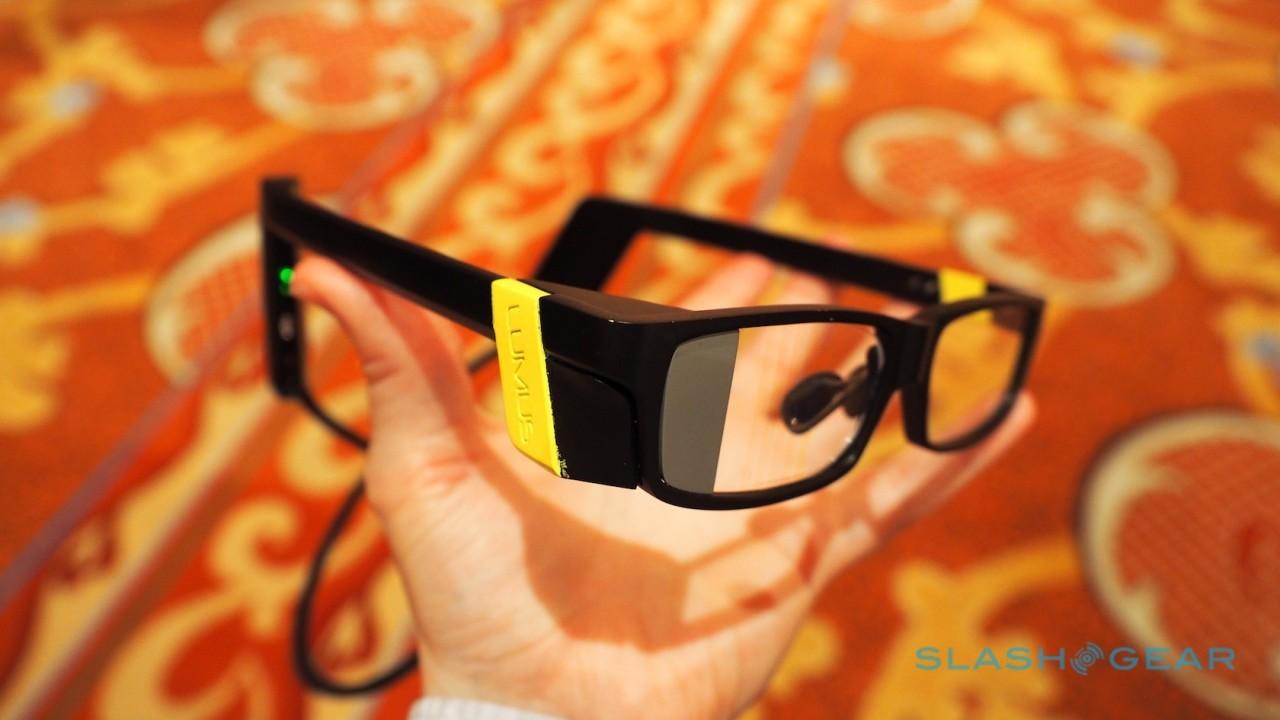 Lumus’ “optical engines” still aren’t enough to give you a fully digital view, but it’s significantly better than what I’ve seen from other head-up displays. The company says it’s working on 60-degree FOV versions that could arrive as early as this year, while 1080p displays are also on the roadmap.

In a second demonstration, another brand-new prototype – the DK-45, one of only three currently in existence, in fact – showed how Lumus is hoping to help slim the form-factor down until AR glasses can look like regular spectacles. The DK-50 isn’t going to be mistaken for that, and – to be fair – neither is this new, monocular model, but it’s definitely sleeker even than the DK-40 reference design I played with back in 2014. 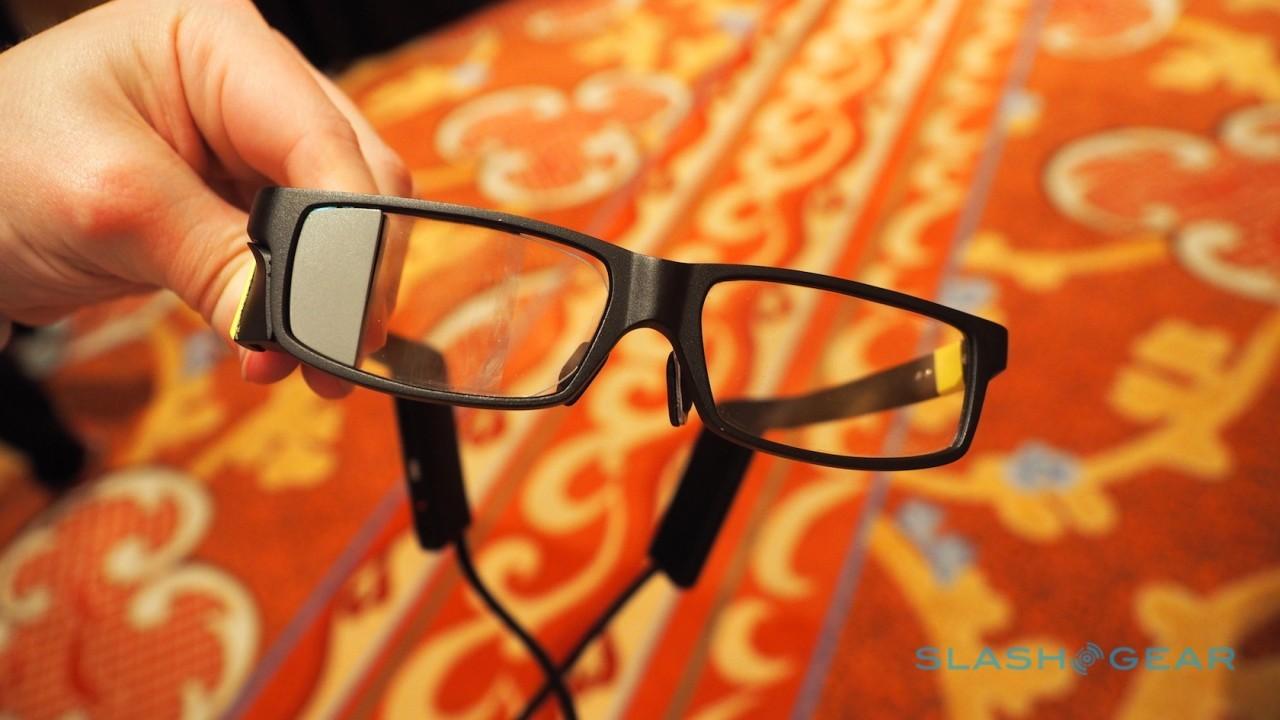 Clearly you’re not going to get 3D, but you do get a sizable Android interface floating in your right eye. Right now there’s nothing much you can actually do with it – Lumus didn’t have any eyewear-specific apps loaded – but it was a huge improvement on workable display size compared to, say, Google’s Glass (which has a mere 15 degree FOV).

Lumus isn’t a wearable manufacturer in its own right: its reference designs and developer kits aren’t intended for consumers. That means it’s up to third-party manufacturers to pick up the tech and package it, with Japanese firm Suncorp already signed up to use the DK-50 hardware for their AceReal headset due to debut in Tokyo later this month. 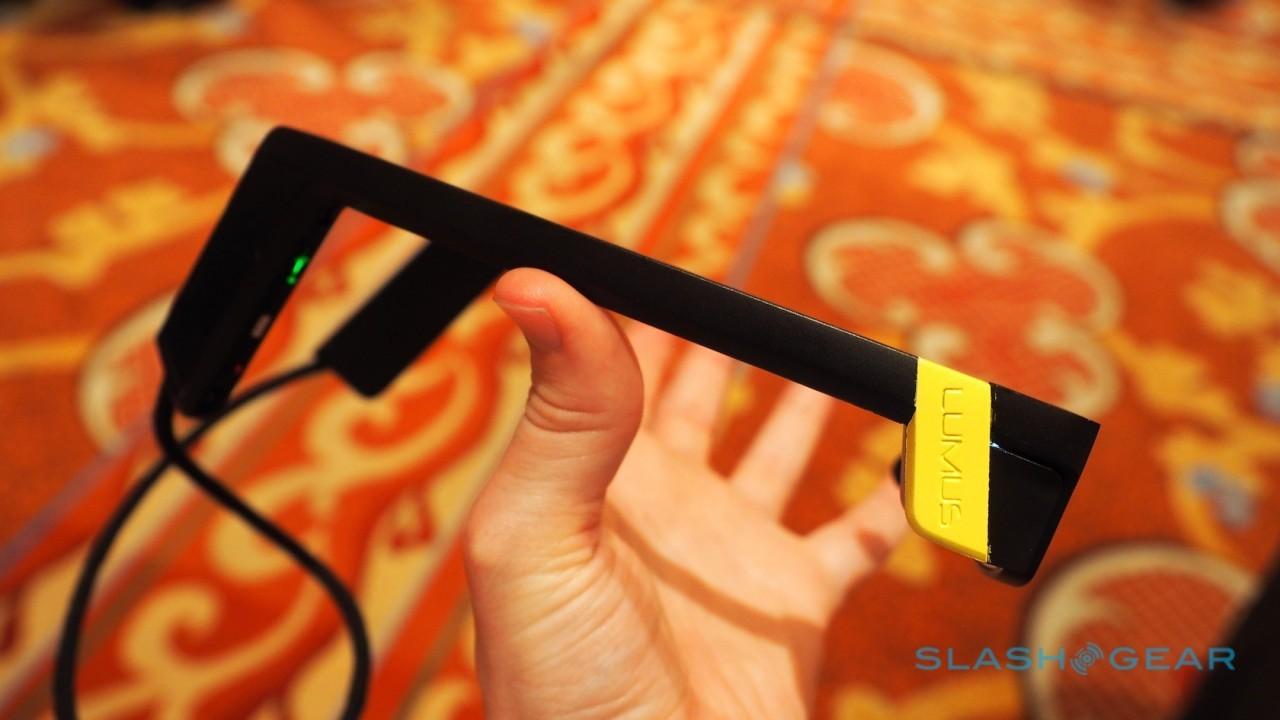 That’ll be targeted at enterprise users, somewhere AR has still had more success than among the general public, but as the quality of the displays – and the user experiences developers offer – improve, we could see a significant shift in that beginning this year.