The SkyDrive SD-03 is the flying car of tomorrow

It seems we won’t have to wait long to finally realize the dream of riding in a flying car. Three days ago, the SkyDrive SD-03 made its first piloted voyage around the Toyota Test Field in Japan. SkyDrive is a Toyota-backed Japanese startup that aims to make flying taxis a reality by as early as 2023. The test flight was on a single-seat model powered by four pairs of propellers and an electric battery.

Sure, the SkyDrive SD-03 didn’t actually ‘soar’ to the heavens and move through time like in Back to the Future 2, but it managed to lift and hover six feet on the ground with a pilot on board. The entire flight lasted around five minutes and is the company’s first manned flight aboard the SD-03 flying car.

“We are extremely excited to have achieved Japan’s first-ever manned flight of a flying car in the two years since we founded SkyDrive in 2018 with the goal of commercializing such aircraft,” said Tomohiro Fukuzawa, CEO of SkyDrive. “We want to realize a society where flying cars are an accessible and convenient means of transportation in the skies and people are able to experience a safe, secure, and comfortable new way of life.”

Granted the SD-03 is merely a single-seat flying car prototype, but the commercial version is envisioned to have two seats. It’s not exactly a car per se made obvious by the absence of driving wheels, but the SD-03 is designed to be the world’s smallest electric eVTOL or electric vertical take-off and landing vehicle. Measuring two meters high and four meters wide, the SD-03 requires as much space as two parked cars.

The SkyDrive SD-03 is powered by eight electric motors that drive rotors in opposite directions and in four locations to produce lift. According to SkyDrive, using eight motors is a safety precaution to ensure the aircraft remains stable during emergencies. “We aim to take our social experiment to the next level in 2023 and to that end we will be accelerating our technological development and our business development,” added Fukuzawa. 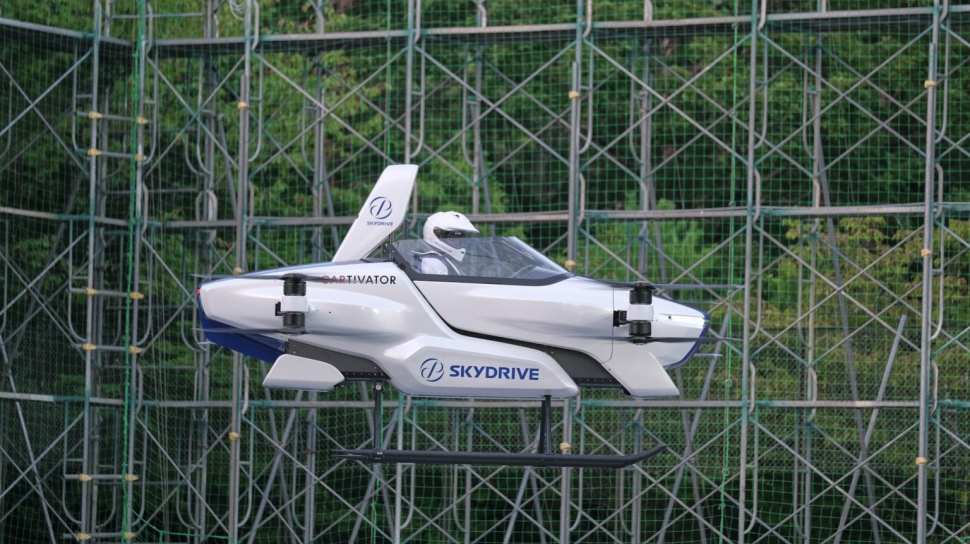 At the moment, SkyDrive SD-03 can only fly for up to 10 minutes and low speeds. In the future, the startup plans to conduct flights outside the Toyota Test field pending full compliance with the Civil Aeronautics Act. The next prototype can fly up to 40 mph in 30-minute durations per single charge.

The burgeoning COVID-19 pandemic has killed other flying car projects around the world, namely the Flyer by Kitty Hawk Corp. and Uber’s flying cab development, but it’s good to know SkyDrive is keeping the flame burning. Then again, the flying car race – a production model for commercial viability – is still open, but SkyDrive is in a big lead.