If you’re going to try to take wearable technology mass-market, is there a better model to copy than the clothes we’ve been wearing for centuries? That’s the question health and biometrics startup OMSignal put to me, on the eve of launching their first wearable device: a range of fitness shirts that spread sensors across the whole torso. Listen to Stephane Marceau, co-founder and CEO of OMSignal, and you may never look at a fitness band or smartwatch the same way again.

You forget how many senses you’re relying on in every moment; quite how much information about your body and your environment that you’re collating and then extracting some context from. A brace of accelerometers around your wrist or in the phone in your pocket gets a fraction of that data and has to infer the rest. 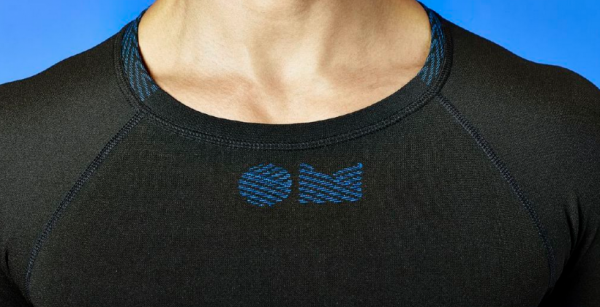 Marceau sees the success of the wearables space like a microcosm of Maslow’s hierarchy of needs. Most important is the underlying quality of the bio-signals coming from your sensors: on top of that is the algorithms that process the data they unlock. Last of all comes the UX at the very top.

In short, if you can’t make smart interferences from comprehensive and reliable data, then it doesn’t matter how pretty your app is.

“We spent a lot of time on optimizing the shirt and the compression to give better bio-signals,” Marceau told me. “Changing the thread, and then we built proprietary tools to look at the signal, analyze it, tag it, filter it. Is it clear enough to derive it or not? A lot of our world involves bio-signal, and I think ti’s something that will become more and more talked about, and widely understood.”

Two years of fabric sensor research and a team of hardware and software engineers, specialists in intelligent textiles, and science and medical experts later, and Marceau believes OMSignal has the answer. The company’s compression shirts look, at first glance, like the sort of sportswear you’d expect from Nike or Under Armor – in fact, OMSignal has them produced on the same machinery that some of the big names in the sportswear industry use – but they’re saturated with biosensing magic. 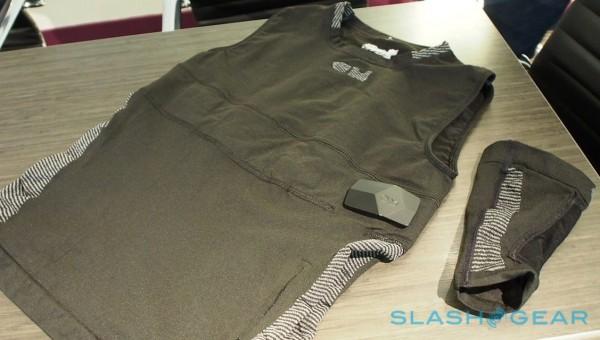 For instance, sensors close to the heart pick up electrocardiogram (ECG) readings, from which OMSignal can calculate not only heart rate but heart rate variability (HRV). Sensors across the chest track respiration rate – from how your ribcage expands and contracts as you breath in and out – as well as balance. Accelerometers figure out activity levels, while a posture sensor at the back of the neck can tell if you’re slumping in your chair.

All that data is fed in real-time to a magnetically-attached “little black box” which clips to the side of the shirt, low down so as not to get in the way of most everyday and fitness activities. Water-resistant, it streams over Bluetooth to a nearby phone, or can store data locally for up to thirty hours, the same as its battery life.

That’s a whole lot more information than the average health band can collect, but it also brings OMSignal head to head with the big, often unmentioned issue in wearable tech: context.

As I’ve written about before, gathering data is not really the sticking point any more. We can already capture more over the course of a day than – for most people – there’s close to having time to review in its entirety. The real challenge is making some sense of all that data, and preferably not only making it readily palatable, but also meaningful enough that it’s worth collecting in the first place.

Sleep tracking is a good example (and, incidentally, something OMSignal doesn’t currently do). Several products promise to monitor how long you sleep for each night; some also break that down into periods of light and heavy sleep. Yet, the culmination of many of those efforts is a pretty graph and nothing more.

Are consumers getting value from bar charts and histograms? I’d argue that, beyond looking at how the patterns may have shifted from night to night – and maybe making a lackluster promise to be in bed earlier from that point on – most wearable wearers don’t actually take away any real value. Jawbone has begun to factor in things like caffeine intake and routine, and maybe help users understand not only how they’re sleeping but why, but it’s still very early days.

OMSignal has picked two areas to focus on for context. The first is fitness, perhaps the most obvious application for a compression shirt. The iPhone companion app can calculate oxygen intake, track breathing balance, when the wearer’s heart rate is in the optimal zone, and even degree of focus; in everyday use, meanwhile, it can use the same sort of measurements to spot stress and highlight the physical symptoms that people might not recognize themselves. 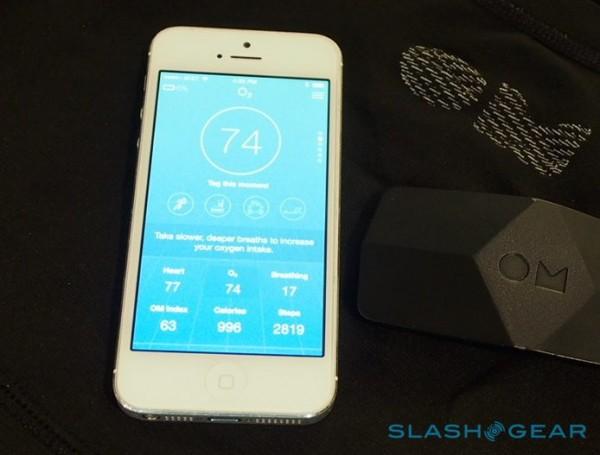 “During the day we’ve got gages that you haven’t seen before,” Marceau explained to me. “Like something that relates to your tension level or stress, or your energy level during the day. So it’s pretty novel stuff.”

Those insights are served up in a way that takes into account historic performance, but also with suggestions as to how to change behaviors too. “We do prescriptions,” Marceau describes, “so, for example, if you’re pushing less than your last workout, we might suggest that you take it up a notch. During the day if your heart rate variability goes low – which means you’re stressed – and your breathing is irregular, we will tell you “slow down your breathing, regain mastery of your self.” Giving life prescriptions that sometimes are at pretty critical moments.”

There’s no one, single heavyweight in the wearables space yet, though there are some big names jostling – or about to jostle – for that position. Players like Jawbone and Fitbit dominate the traditional fitness band market; Samsung and Pebble have made their early plays at the smartwatch, but things will get infinitely more interesting when Google’s Android Wear and Apple’s “iWatch” arrive, themselves expected to blend smartphone connectivity and health tracking in some proportion.

That’s an opportunity for OMSignal, but also a challenge, Marceau admits. The company’s strategy long-term is to license its fabric sensor technology to other firms, having presumably demonstrated its worth with its own line of products.

“Our intention is to scale by being “OMSignal Inside” he explained. “We think we’re going be able to get critical mass of biological signal in the cloud faster that way.”

That critical mass is when things should get really interesting. Like Russian startup GERO, OMSignal has some ambitious goals for pushing the mHealth aspect of wearables, rather than the more cutesy gamification side.

“We think the magic really happens when you have live, ubiquitous biological signal in the cloud,” Marceau concluded. “This is when you can unleash algorithms, see detection patterns, predict trajectory, like “you’re about to have a heart attack” or “you’re going to have a seizure.” So the larger number of people who wear the shirt, the faster you get to a data set where you can do some mind-blowing stuff.”