A plane billed as the largest all-electric commercial aircraft has set a new record, taking to the skies for the first time and making a zero-emissions flight. The all-electric Cessna 208B Grand Caravan – known as the eCaravan – took off from a runway in Washington on Thursday and flew for 28 minutes, with its creators suggesting it could fill an important gap in passenger and cargo transportation.

Before your imagination gets carried away, don’t start picturing an all-electric Dreamliner. The aircraft the eCaravan is based on can seat between 10 and 14 people, and has a maximum range of 912 nautical miles from its usual Pratt & Whitney Canada engine.

That, though, was taken out by magniX and AeroTEC, and replaced with a new 750 horsepower magni500 propulsion system. Delivering 560 kilowatts and promising direct-to-propeller mounting support, the 293 pound motor is more than 93-percent efficient, magniX says. The company is hoping to have it certified and approved for general aircraft conversion. 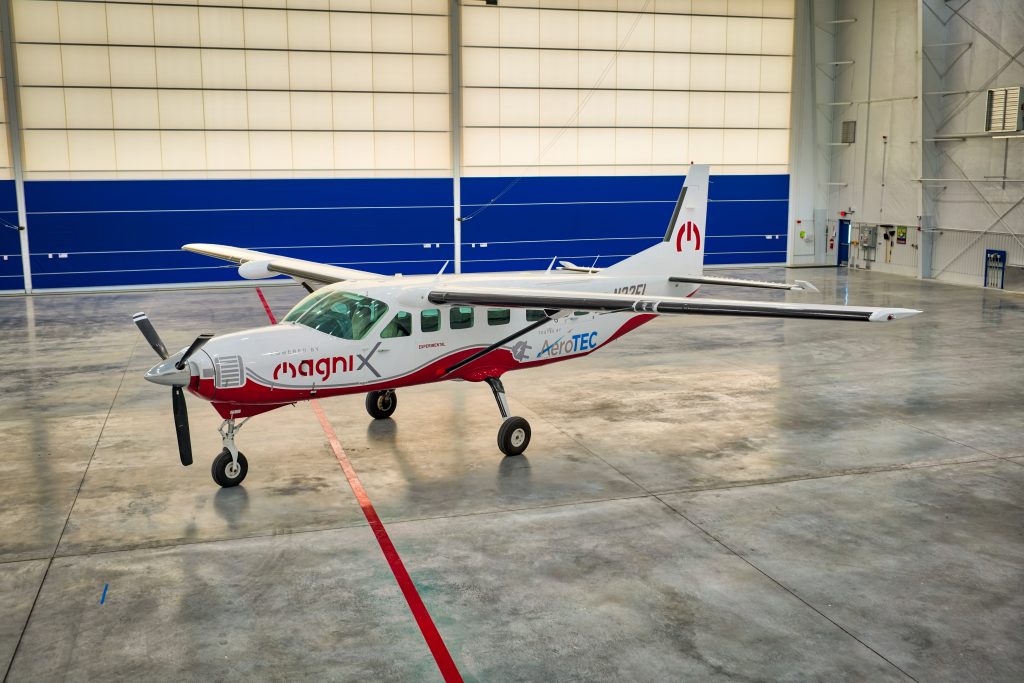 “The iconic Caravan has been a workhorse of industry moving people and transporting goods on short routes for decades,” Roei Ganzarski, CEO of magniX, said of the test. “This first flight of the eCaravan is yet another step on the road to operating these middle-mile aircraft at a fraction of the cost, with zero emissions, from and to smaller airports. These electric commercial aircraft will enable the offering of flying services of people and packages in a way previously not possible.”

This week’s successful flight comes only months after Harbour Air made aviation history with the first test flight of a modified electric de Havilland Canada Beaver floatplane. That, too, used a magniX propulsion system, completing a four minute flight after taking off from Vancouver International Airport.

The electrification of planes is something several companies have been exploring, with mixed results. While individual transportation has been one area of interest, particularly in urban areas where VTOL (vertical take-off and landing) could allow electric aircraft to hop between buildings, the so-called “middle-mile” is arguably more practical a target.

That’s not to say bigger projects haven’t been attempted, though with mixed results. Airbus and Rolls Royce, for example, permanently grounded their E-Fan X hybrid plane project back in April, which had explored replacing one of four jet fuel engines on an aircraft with an electric motor. The idea had been to make take-off and landing more efficient, not to mention quieter.

Middle-mile transit, meanwhile, focuses on passenger and commercial transportation up to 1,000 miles. It’s a role the Cessna Caravan has dominated, and magniX and AeroTEC are hoping that demonstrating the potential ease and success of electric retrofits could convince operators to embrace conversion more rapidly.