The Irrelevance of Ultra HD

CES is about the future of consumer electronics; I get that. We go to see what’s going to make our eyes light up later in the year. But take a glance at our CES 2013 Hub and it’s clear that Ultra HD was the tech most of the big companies were pushing, and it’s arguably the most irrelevant theme to the electronics industry – for the near future, at least – we’ve seen in some years. Not since the very earliest days of 3D have we seen a segment so desperate to validate its own existence, and failing so miserably.

I can understand why manufacturers like Samsung, Sony, Panasonic, and others push TVs as the perfect vehicle for Ultra HD. They’re huge products – physically speaking – and in the charged, competitive, genital-waving atmosphere of Las Vegas, having The Biggest is a fair way to being seen as having The Best. A vast TV looks great on a stage during your keynote, and it provides a great focus point for gawping visitors to your booth.

Practically, though, when you need a huge set to actually take advantage of the technology you’re positioning as the Next Evolution for home entertainment, you’re already irrelevant to a huge swathe of your audience. The most common size was 84-inches – eighty four! – and they started to look small in comparison to the few 110-inch monsters. Worse still, every company did a grossly poor job telling us why we need Ultra HD, relying on big numbers to sell the technology alone.

That’s why, despite the majestic monsters from the main culprits, it was a far smaller – and quite different – interpretation of 4K that I left CES feeling was the best implementation of the technology. Panasonic’s 20-inch Windows 8 tablet may be a fraction of the size of, say, the company’s own Ultra HD TVs, but for once the 4K context made sense. The detailed resolution would be great for digital artists, Panasonic pointed out, as well as those in medical professions and architects. 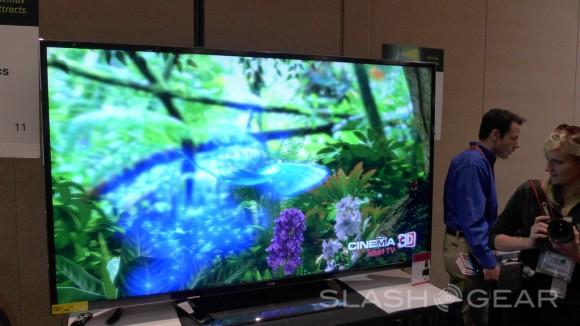 Samsung even hinted at that alternative strategy itself; when Joe Stinziano, the company’s EVP, told us he saw mass-market relevance for Ultra HD perhaps five years out, he highlighted those fields as potential early-adopters, not people with playing field-scale living rooms.

A 20-inch tablet doesn’t leave you with the feeling that you need to wear sunscreen when you’re basking in its glow, however. And CES is perhaps the place where context has no role: we make these things because we can, is the unspoken message from manufacturers, not because you necessarily realized you needed it, or even wanted it. It’s proof of concept without pause for practicality.

And yet… what will they show us in January 2014? When Ultra HD sets are still the stuff of vastly expensive, niche, 84-inch irrelevance – because, let’s face it, 1080p is going to be the beginning and end for 99.999-percent of consumers this year – what will the TV industry wow us with? It’s an arms race of idiocy, when there are still plenty of far more worthy areas of attention (the broadly appalling smart TV performance of most internet-connected sets, for instance) which affect far more people but are just less attention-grabbing than a $20k luxury toy.

For now, though, the message is simple. Don’t worry about Ultra HD. It really doesn’t matter.