It’s time to bring out the big guns with The Conduit HD for Android, a game that’s been boosted into the mobile space by the developers at High Voltage Software assisted by the Tegra team at NVIDIA. With this version of the game you’ll be rolling out with everything you saw on the original Wii version and more – 9 mission of furious blasting of alien beasts from the comfort of your own smartphone or tablet! This game is out this week for Tegra-toting machines, here in the mobile universe for the first time!

What you’re seeing here is a rather radical environment in which your mission is to destroy a mysterious and other-worldly enemy with a dynamic user interface available right from your touchscreen device or wirelessly with your own Bluetooth-connected gaming controller. You’ll be using pistols, machine guns, and a fabulously strange “All Seeing Eye” device (ASE in the game) to explore this strange new world and puzzle solve as you blast through the opposition. Below you’ll see the game running on the Google Nexus 7, the ASUS-made tablet working with NVIDIA’s Tegra 3 quad-core processor under the hood.

You’ll be able to control your gameplay from start to finish with control options everywhere from flipped tapping to auto-fire mode. You’ll be able to change the layout of the buttons and controls, change the way you target and move, and you’ll have – specifically – GameStop Controller support as well. This is the more “traditional” way to play the game, they say, with Bluetooth-connected blasting on your side. 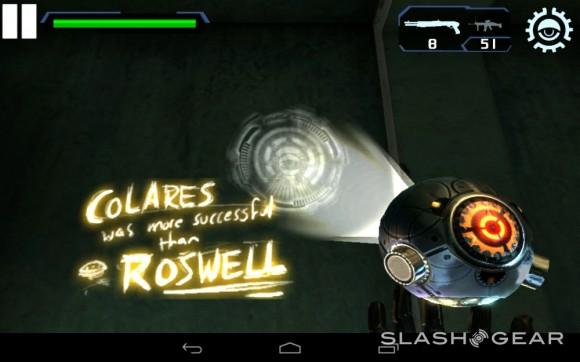 The weapons you’ll be using number to 18, unique firing modes and actions for each, with the ASE to back you up from start to finish. You’ll be destroying your enemies which number to 14, for starters, both human and alien creatures coming at you not just from straight up in front, but below and up above as well. Head down the stairwell, watch out for snipers up on a second level, and toss grenades all around. 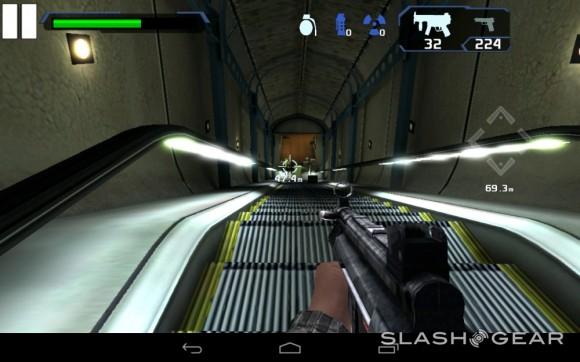 And the best part is the graphics have been given a bump between the original Wii version and here with NVIDIA’s Tegra SoC. With the Tegra 3 quad-core processor you’ll be blasting up and out with what the Chief Creative Officer of High Voltage Software, Eric Nofsinger, calls “console-quality visuals on mobile devices.” This includes enhanced lighting in all your darkest corners, higher resolution graphics than ever before, and “much-improved” visual fidelity compared to this game’s original release. 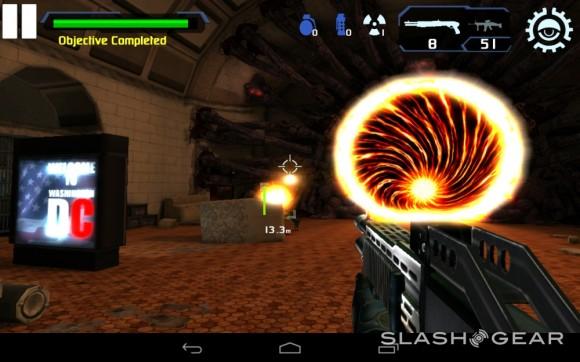 This game will be available to you immediately if not soon from the Google Play app store through the NVIDIA TegraZone with a rather unique pricing structure. You’ll be able to download the game for free, and the first two levels are completely free. After that you’ve got the option of buying the whole rest of the game at once for $4.99, or you can buy each of the two halves of the game for $2.99 each. At the moment we can’t imagine why you’d only want half the game, but to each their own. 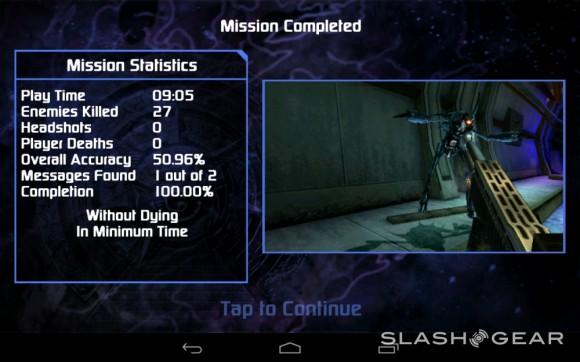 Have a peek at the timeline below for more Tegra-enhanced games available in the NVIDIA TegraZone right this minute, and don’t forget to hit up our own massive Tegra Hub too for more NVIDIA mobile action than you can handle!