I confess, I didn’t really take Tesla‘s test driver seriously when he told me I needed to put my head safely against the headrest before he floored the new Model S P85D. Sure, EVs are torquey from a standing start, but 0-60mph in 3.2 seconds isn’t unheard of in the sports car world. Then we accelerated down Tesla’s LED-lit tunnel, a multi-colored birth canal for the fastest four-door sedan ever made.

The P85D is fast. In fact, the regular P85 – which languishes with mere rear-wheel-drive, unlike the all-wheel-drive of its D-suffix sibling – is a fast car, but the addition of extra motors for the front wheels has added around half as much power again, Tesla CEO Elon Musk revealed. 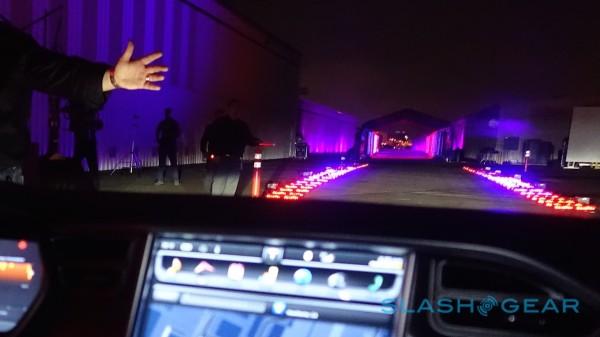 What makes it so unusual is the absence of sound. A fast car usually involves a vast engine, roaring and grumbling under the hood or inches behind your head, but the Model S only has the yowl of the tires as they grab for traction and the “whooooosh” of the car surging forward.

Of course, going fast is only half of the updated Model S story. More interesting, arguably, is the self-driving technology that Tesla has baked in, what Musk described as “Auto-Pilot” when he outlined his roadmap for a car that monitors your calendar and automatically shuttles itself to your front door when you’re next going on a road-trip.

Right now, that’s beyond the Model S’ abilities, but what it can do is impressive nonetheless.

Tesla’s demo was brief – we’ll need to take the EV out on the road to see how it actually holds up in real traffic – but it’s capable of not only the usual intelligent cruise-control trick of lane-keeping, but of navigating the curvy stuff too without slamming on the brakes first.

Cameras keep track of any signs posting speed limits, automatically adjusting the auto-pilot to suit. You might think sticking to 30 in the relevant zone would feel sluggish, but the knowledge that your hands and feet are away from the pedals somehow makes it feel a fair bit faster.

Tap an indicator and the Model S automagically checks that the lane is clear and then moves smoothly across. Run up against slower traffic, and it’ll come to a halt of its own accord. There’s no tentative creeping, no overly-cautious AI: in fact, the auto-pilot feels a lot like Musk himself, boisterous, eager, and very, very confident.