Tesla’s latest full self-driving car went for a drive: Watch how it did

Tesla has released a new video of its latest full self-driving car prototype in action, showing an autonomous Model 3 complete a full journey without human interaction. The demo was released following Tesla’s first Autonomy Investor Day on Monday, where the automaker detailed some of the work it has been undertaking on driverless technologies.

As you might have expected, the event wasn’t short on controversial statements by Tesla CEO Elon Musk. While the day – attended by analysts and investors, but not media – was intended to focus on Tesla’s Full Self-Driving Computer and the chips the automaker created for it, Musk also spent some time criticizing the autonomous approaches other projects have taken.

“LIDAR is a fool’s errand, and anyone relying on LIDAR is doomed,” Musk predicted. “Doomed. Expensive sensors that are unnecessary. It’s like having a whole bunch of redundant appendices.”

The day wasn’t just about watching presentations, mind. Tesla also sent attendees out in its latest prototypes to get a taste of what an autonomous EV would be like. It then released a video so that those who couldn’t be there could see the car in action. While I may not have been inside at the time, I actually live near the area and drive the same roads as Tesla’s test route regularly, so it was interesting to see how the prototype handled some of the particular foibles.

In the clip, the Model 3 prototype starts out at Tesla HQ, the corporate campus in Palo Alto, CA. After being started on its route by a safety driver behind the wheel – who does not, over the course of the sped-up video, touch the controls again – the EV leaves the parking lot and makes its way to the 280 highway.

Along the way it autonomously changes lanes when necessary, as well as navigates its way through intersections. Some of those junctions are trickier than others: at approximately 0:23 in the video, as the self-driving car begins to merge onto the highway, it does so at a fairly complex point where fast-moving traffic from the left is also attempting to merge. In a human-controlled car, that can require some head-craning in order to make sure there’s no oncoming vehicle to the left emerging from behind the bushes.

The stretch of highway driving, in contrast, is straightforward. The Model 3 does not stray from its lane, and then pulls off at the Sand Hill Road junction. It then bypasses another potentially difficult maneuver: at 0:45 in the video, someone leaving the highway would typically want to move to the left lane rather than rejoin the 280 again in the opposite direction. Doing so requires another merge with limited visibility of cars coming from the left, as well as dealing with a cycle lane in-between the two lanes. 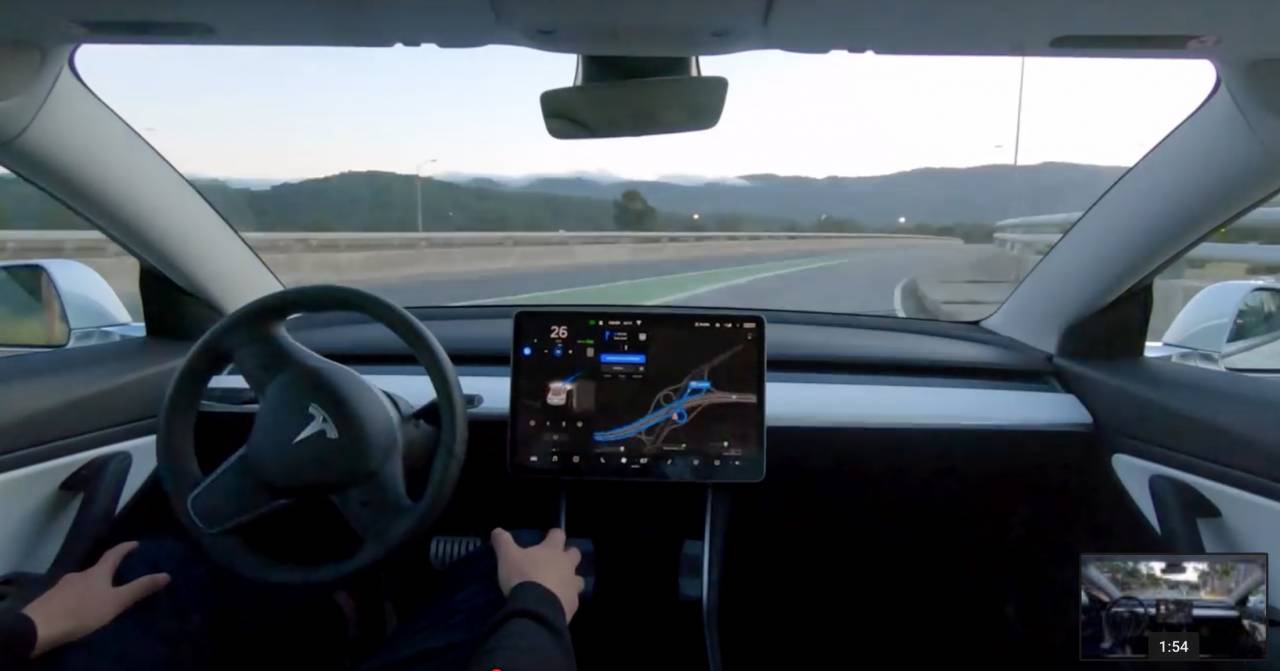 An interesting side-note to the video is the lingering – and still unsettled – question about how close to the rules of the road an autonomous vehicle should be expected to behave. Although Tesla has changed the speed of the video, it’s clear from the Model 3’s dashboard display that the EV is driving 5 mph over the highway speed limit. Later, at approximately 1:15 in the clip, the car changes lane.

It’s just before the lane the car moves from actually ends, as the road goes from three down to two. Where the Tesla changes, the lanes are separated by a single solid white line. In California, such lines are legal to cross – unlike double yellow lines – though that’s not the case in every US state. However the solid line is intended to discourage lane-changes at that point, in this particular case as traffic from both directions on the highway are merging onto the road from the left and right almost simultaneously.

While the Model 3 could have stayed in its lane until it merged with the – relatively empty – center lane just a few dozen feet more, the autonomous system opted instead to change lane prematurely. That’s not breaking the rules, per se, but it is arguably a more human driving style.

A single demo is still some way off being suited to every road, every weather condition, and every traffic situation. Still, Tesla’s ambitions for autonomous driving are aggressive. Musk insisted that he believed self-driving Tesla “Robotaxis” could be operating on public roads as soon as 2020, assuming a favorable regulatory environment. How practical that is remains unproven, but it’s clear that the automaker isn’t giving up on its dream of eventually retiring the steering wheel and pedals.