T-Mobile’s Uncarrier 7.0 is the day after Apple’s big launch

T-Mobile USA is racking up the Uncarrier events with alacrity, and the latest – Uncarrier 7.0, if you’ve not been keeping count – is set to take place on September 10th, the day after Apple’s big iPhone 6 reveal. Taking place at a T-Mobile USA store in San Francisco, exactly what’s on the agenda is unclear at this stage.

That hasn’t stopped T-Mobile’s hyperbole, of course. “We told you Un-carrier 7.0 was coming,” the company said, alongside its invitation. “We told you we won’t stop. And this time, it’s personal.” 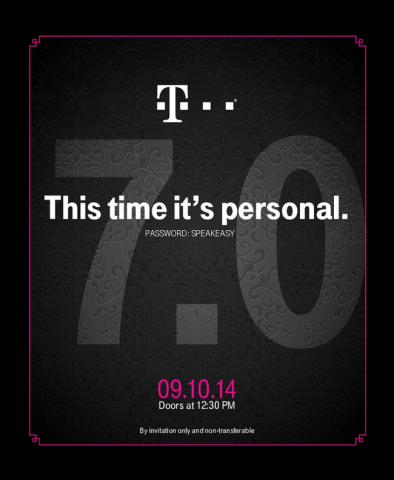 Were we the sort of people to go digging through hidden messages, then we might find ourselves asking if the “personal” reference is connected with T-Mobile USA’s “Simple Choice” individual plans. After all, the family plans were last to get a revamp, with the carrier doubling the number of people who can be included on a single plan to ten.

Meanwhile, T-Mobile’s entry-level Simple Starter plan got a data upgrade option shortly before that, with the opportunity for the contract-averse to upgrade to 2GB of LTE access for an extra $5 per month.

The timing around Apple’s iPhone 6 event would certainly lend weight to rumors that the two could be connected, though we’ll have to wait until September 10th to know more.