Okay guys I have the Samsung Dart here to show you all, amazing I know. This little guy is absolutely what you would call a mid-range Android phone, and saying mid-range is being generous. Lately T-Mobile and Samsung have been pushing some decent little mid-range phones out this summer for all those kids and teenagers that are ready for summer and want a new smartphone for graduation or what not. Most have been pretty decent but this is the lower end of the bunch that is for sure.

We’ll start off with a few specs just so you are up to spec. It is small and lightweight Android phone running on Android 2.2 and an old version of Touch Wiz, has a 600 Mhz CPU and a 3MP camera on the rear, but no led flash or anything although you do get a 2GB MicroSD card for all those photos and videos. At first I thought it was a 3.2″ screen like that of the Gravity Smart but quickly found out it was actually smaller, and had a lower resolution. Picture below shows the Exhibit 4G on the left, then Gravity Smart followed by the Dart on the right. 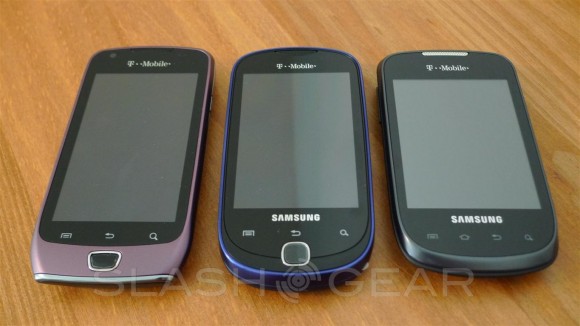 I have to mention it because it is a huge factor in a smartphone since you look at the screen all day, but the Samsung Dart has one of the lowest quality displays I’ve seen to date and I honestly think my G1 looked better. The issue is the 3.14″ screen is only sporting a 240 x 320 resolution and most lower end phones at least are 320×480 in that department. In general the rest of the phone actually feels pretty nice in the hand and of decent build quality. Here is the video below

Other than the fact that the display actually is fuzzy enough to give me a headache the phone is quite nice. Android 2.2 works pretty well and the 600 Mhz CPU seems to be enough for a device like this. It comes with Swype pre-installed and it works great and screen responsiveness wasn’t an issue. The phone is currently free with a new line or 2-year contract on T-Mobile or can be bought outright for $200 if you wish. This would probably be a great first smartphone for your kids.

For now check out all the pictures below and get a better look at the device and I will be messing with it over the next few days and will post some final thoughts with a review shortly.