It’s that time again, time to take a look at an app so large in scale that it’s only got a few elements we can even talk about. It’s Swype 3.0 and we’re going hands on with the Beta of it as it’s being offered to each and every one of you today for testing. Swype, as you know, is a keyboard system in which you’re able to either peck away as you normally would or slide your finger around the keyboard in a manner that will allow the system to predict and understand the words you’re typing. Pretty cool, yes? Now it’s about to be available for Android tablets, and everybody’s celebratin’!

What you’ve got here is a version of Swype which supports many resolution sizes, this stack including such gems as qHD, HVGA, WVGA, QVGA, WQVGA, WSVGA, and FWVGA. You have the option, as you should, of typing in either landscape or portrait mode, with a special tiny mode for a single thumb in either direction as well. Lots of learning going on here, predictive tapping galore, and of course, your favorite dragging of the finger to create a path to words. PLUS there’s a horizontal word suggestion bar, the ability to learn as many new words as you like, and lots of hype! And wouldn’t you know it, the fine folks at Swype have beat us to a hands-on, those wily devs. But don’t worry, we’ve still got our hands-on further below:

This version of the app is one that’s got a few kinks left to work out, kinks like the quite often instance of the stock internet browser crashing almost every time we’ve got the mini keyboard open. After that though, it’s a smooth experience made for all those folks looking for the greatness in 3rd party keyboard functionality. You’ve got the ability to craft this keyboard to your liking, with a button that activates several different configurations, another button that switches the keyboard from a two thumb to a one thumb size, and of course, again, the Swype function itself. 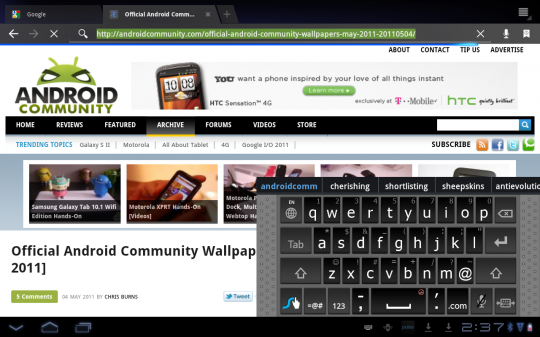 While if this exact edition of the app were released right this moment we’d do a bit of a double-take, we’ve got a pretty good feeling that the bugs will be squashed WAY before it’s release time. This is indeed a BETA, to be extra clear, that meaning it’s supposed to be very unfinished, getting ever closer to a release edition indeed. From what we’ve seen here, a promising vision of ease in keyboarding rests ahead, one that’s better than any other mobile keyboard on the market on any platform, mark my words. 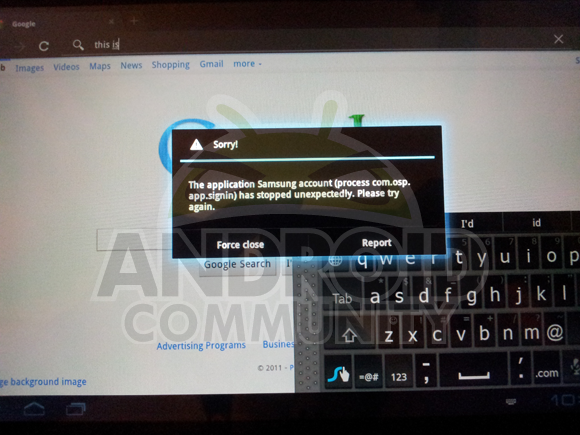 Have a look here at a demonstration by yours truly done in a special dark environment so you can see just the good stuff. This demonstration is done on the brand new Samsung Galaxy Tab 10.1 standard wifi edition, the kind with the lovely TFT LCD display, a fine flat white back, and thinness that’s yet unsurpassed. Look for our full review of this device soon or check out our already-up review of the Google I/O Limited Edition of this tablet now!

That link again to your opportunity to download this early edition is right over here and we do recommend you try it. It’s one spiffy keyboard and, since you’re participating in the testing run, it’s totally free. You do have to be aware of the risk of downloading a non-final version of an app here, but it’s no more risky than any other app, that’s something you can take for granted. Once you’ve got it, report back, let us know what you think!