Google Street View has escaped Earth and made it to the International Space Station, with the first-person Google Maps add-on venturing out into zero gravity. European Space Agency astronaut Thomas Pesquet spent half a year on the ISS, returning to Earth last month. While on the orbiting research platform he captured numerous Street View images which Google has now released publicly.

“In the six months that I spent on the International Space Station, it was difficult to find the words or take a picture that accurately describes the feeling of being in space,” Pesquet says of his time in space. “Working with Google on my latest mission, I captured Street View imagery to show what the ISS looks like from the inside, and share what it’s like to look down on Earth from outer space.”

While Google does have a variety of camera systems to capture Street View content, ranging from the familiar cars with 360-degree cameras sprouting from the top, through to camera-toting backpacks that individuals can wear, they were all too bulky and heavy for Pesquet to use. Instead, NASA and Google worked together to figure out a way to take advantage of technology already available in space, along with DSLR cameras. Photos were snapped by the astronaut in space, then transferred down to Earth whereupon Google stitched them altogether into 360-degree panoramas.

Even with so many smart people involved, the realities of an atypical and highly unusual environment still gave them headaches. “There are a lot of obstacles up there, and we had limited time to capture the imagery, so we had to be confident that our approach would work,” Pesquet recalls. “Oh, and there’s that whole zero gravity thing.”

The photos not only give a visual insight into what life is like on the ISS, but also introduce a new feature to Street View. For the first time there are now text annotations, pinned to different elements in the frame. Clicking or tapping on those pulls up an explanation of what you’re looking at, such as details about the cupola observation module, the crew quarters, or other more technical aspects of the space station.

Street View started out as a fairly straightforward way to see a first-person view of a street from Google Maps. However, since its launch in 2007 it has evolved into a way for internet users to visit places and experiences that they might not, ordinarily, get to do in their lifetime, for reasons like practicality, cost, or safety. A Street View experience added in May, for instance, took viewers up close with an active volcano; last year, users could climb Mont Blanc with a lot less effort using the technology. 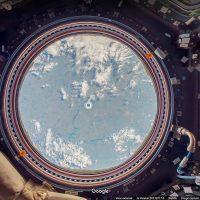 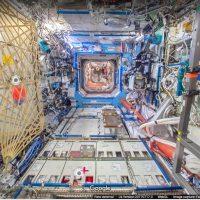 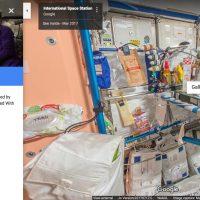 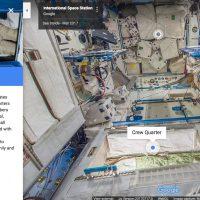 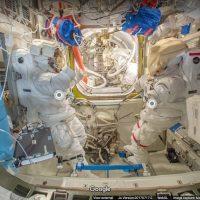