Star Wars: The Force Awakens SDCC trailer: 15 things you may have missed

The following is an in-depth analysis of the tiniest of details in the newest Star Wars teaser video. This analysis runs over the odder bits and pieces. It pre-supposes that you’ve been keeping up just a tiny bit with the news on this film, and assumes you’ve seen the other teasers – all two of them. Let us know if you find anything other than what we’ve found here, or if you find something interesting or completely contradictory to what we’re presenting. We’d love to chat! This is the Star Wars: The Force Awakens “Making Of” teaser from SDCC 2015.

First you’re going to need to take a peek at this video spot. Have a look, keep it open in a separate window. Do what you you have to do to follow along. This is like a class on noticing all the tiny little bits that JJ Abrams wants you to spot. Don’t think for a minute any of this was unintentional.

1. The first shot you see in this teaser has a clapperboard with note of camera lens AL35. The shot a little later on showing the insides of a camera has this same code on it. Nothing too groundbreaking – it’s just fun to see that “this is what the camera sees” first, then “this is you seeing the camera.”

2. Next you’ll see the image you see below, here, shot from just under a minute into the video. This shot shows some practical effects aliens in the foreground – but look back over their shoulders. That’s a set of three images of Admiral Ackbar. I think we can pretty safely call those earlier leaks of Ackbar and Nien Numb appearing prepped for this film now safer than ever before. 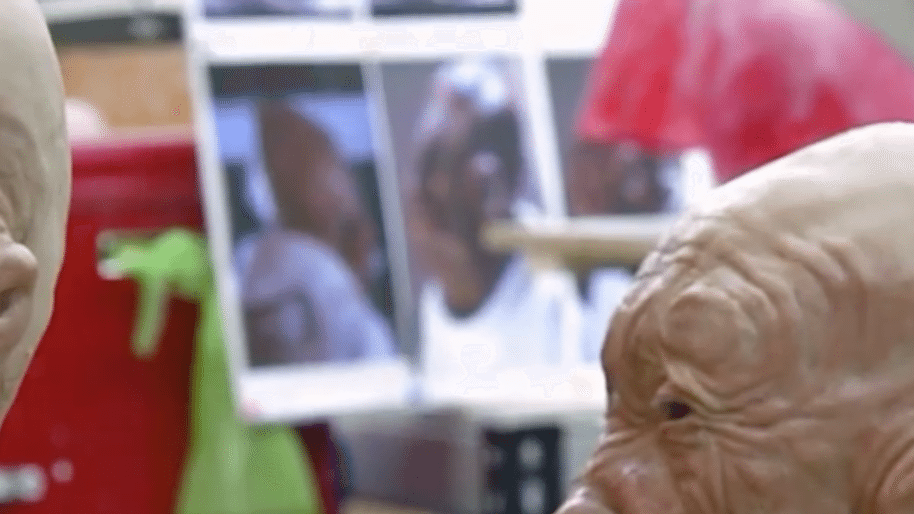 3. C-3PO now has a black arm. Not a huge deal – but certainly another aesthetic marker. C-3PO’s body stays relatively similar throughout the series, and his arm and leg panels sometimes switch from gold to silvery chrome. This is a dark time, apparently.

UPDATE: Every other place C-3PO appears in this video, his arm is red! 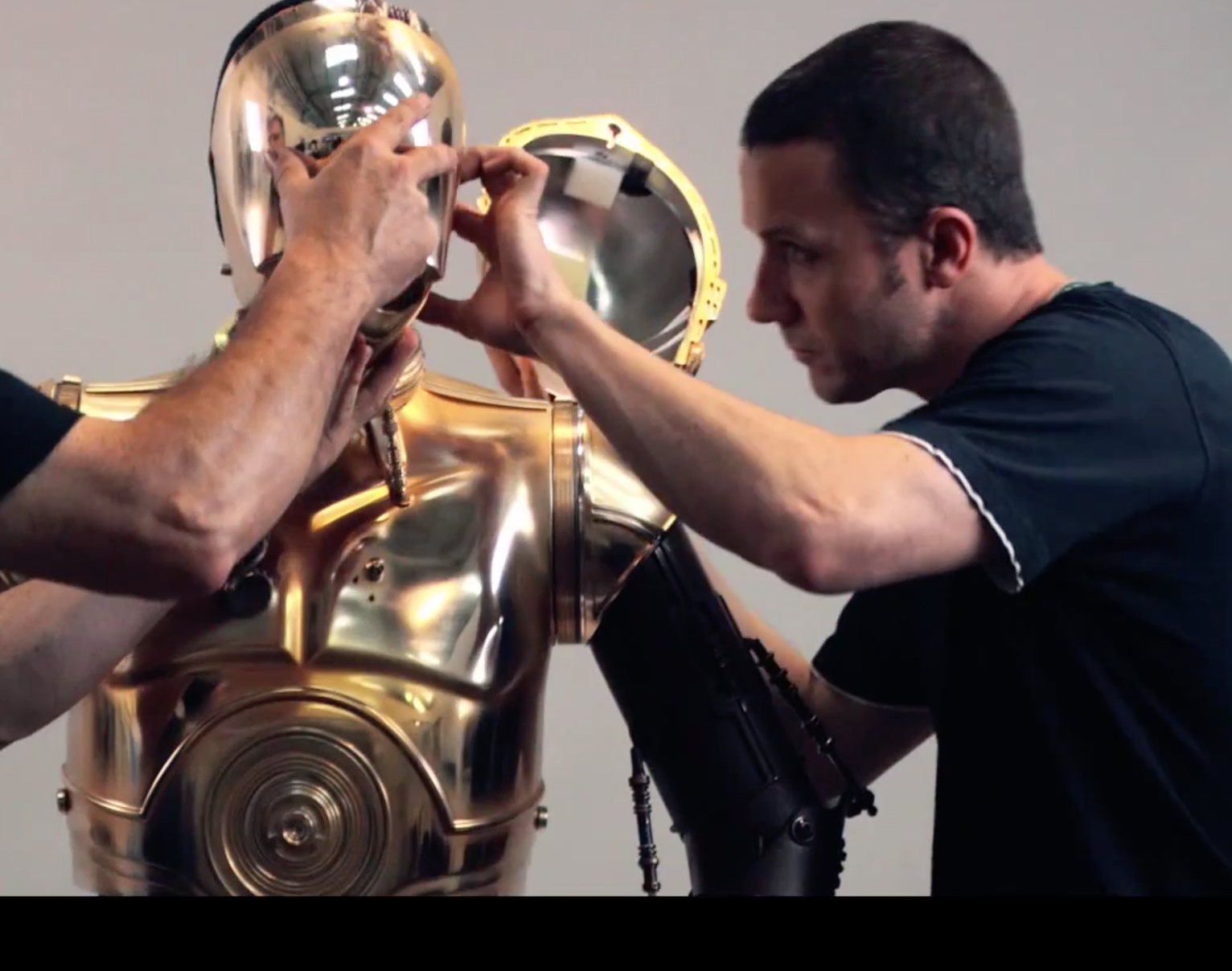 4. Next you’re going to see a painting by Ralph McQuarrie originally made for Return of the Jedi. It shows Luke walking through the front gate of Jabba’s Palace. That entryway never made it into the final cut of the film in Return of the Jedi. 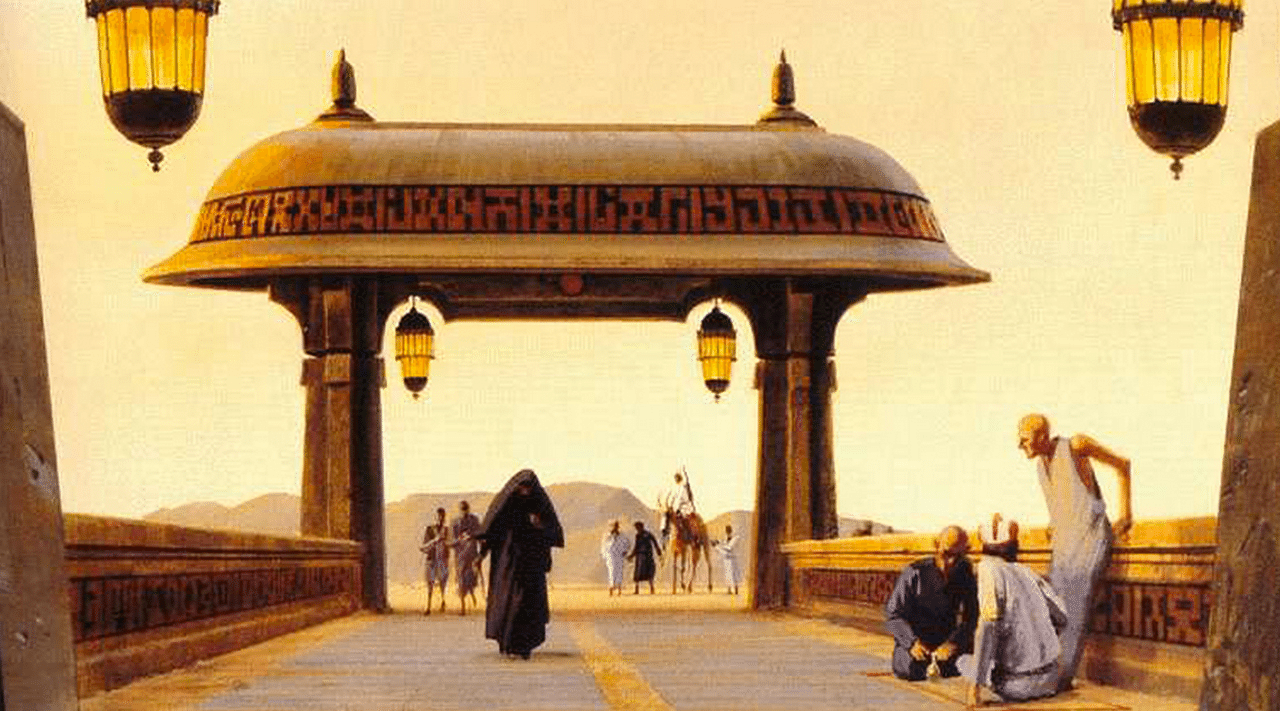 As you can see from the making-of teaser here, this “Jabbas” gate did make the cut for The Force Awakens. Our best look at this gate yet – on a completely different planet.

5. This right here is one of the happiest stormtroopers in the world. His name is Phoenix James.

6. Further confirmation that this film is getting deep down and gritty with the practical effects. Real paint, there, hand-painted helmets as they’d actually have to be if these sorts of X-Wing pilots wanted their helmets customized. 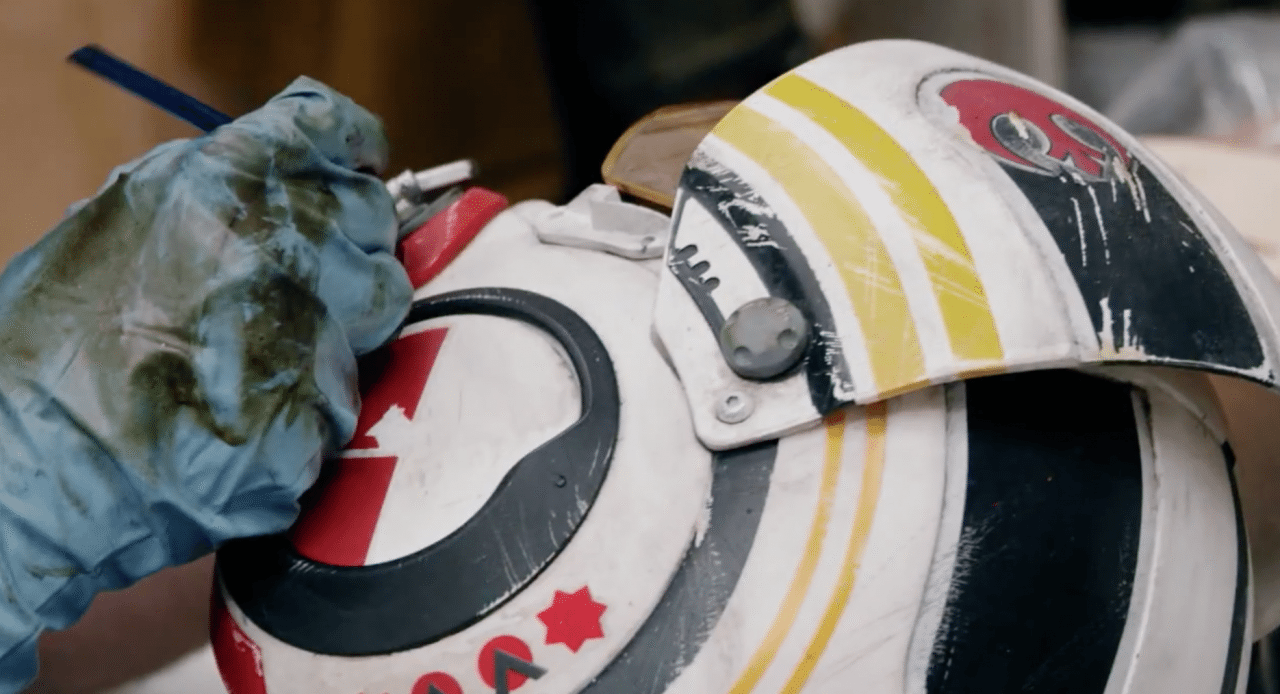 7. Simon Pegg pops up more than once – he’s likely not cast as a big role, as no announcement as such has been made. Instead, as a massive Star Wars fan himself, he probably had some close chat with JJ Abrams, also director of the Star Trek films in which Pegg plays a central role as Scotty.

He’ll be deep in some wide pants of an alien or two.

8. The oddity you see at 2:04 is an EG-6 Power Droid, also known as a “gonk” droid. This droid first appeared in the Sandcrawler with R2-D2 and C-3PO in Star Wars: A New Hope after they’d been picked up by Jawas.

This GONK appears several times throughout the series. 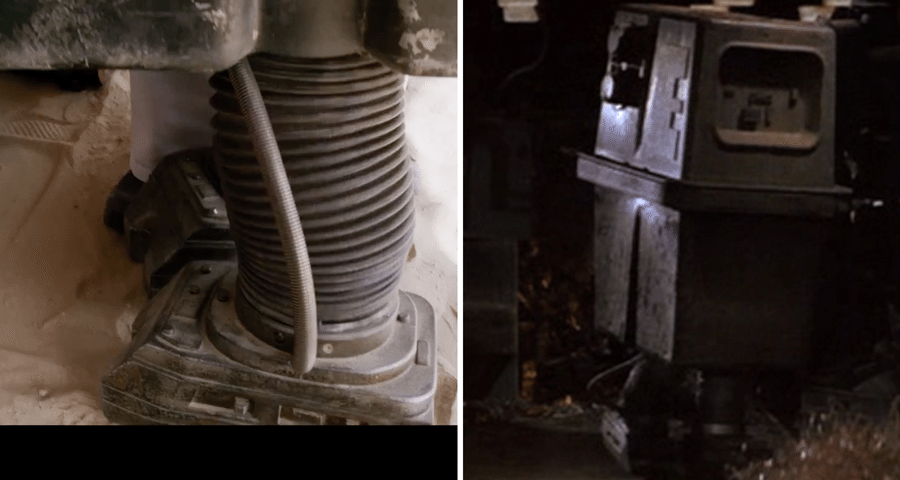 9. In the background of this creature shop shot from 2:09 you’ll see a set of reference photos. Amongst them is this action figure shot of the bounty hunter Bossk. 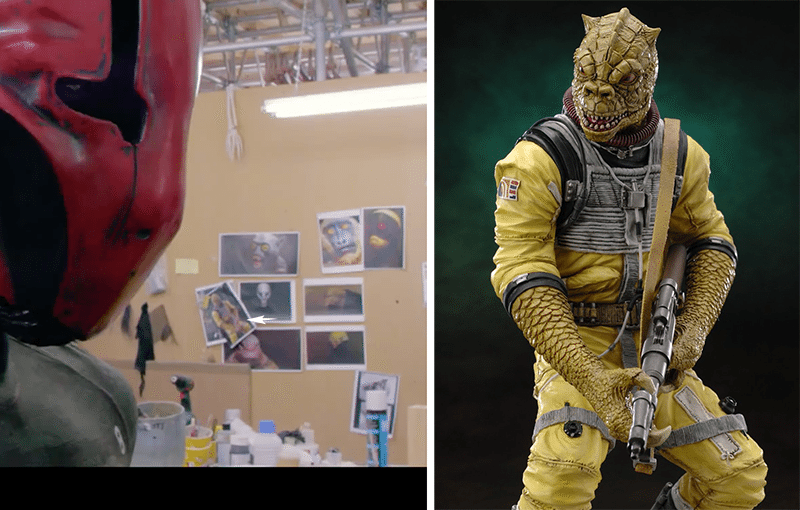 You’ll find this red-faced alien in this Vanity Fair image from earlier this year. You’ll also find the very large creature from earlier in the “behind the scenes” video as well. Here it appears that he’s wearing an outfit not all that unlike what we know Bossk to wear all the time – could it be that they’re not-so-distantly related somehow? 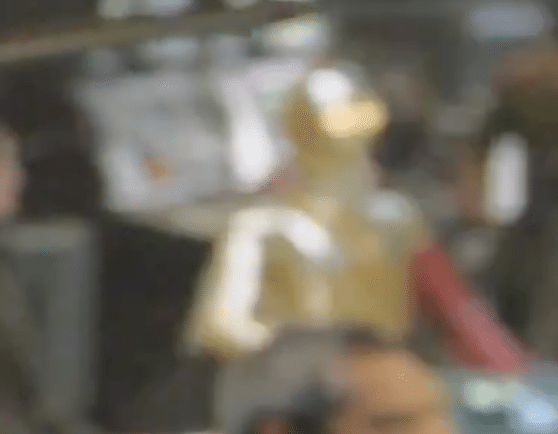 11. The Millennium Falcon is here again – this shot you can again confirm the existence of a different control panel. Now they’ve got steering wheels. You’ll also see a couple of IMAX cameras prepped for shots from right above the console. 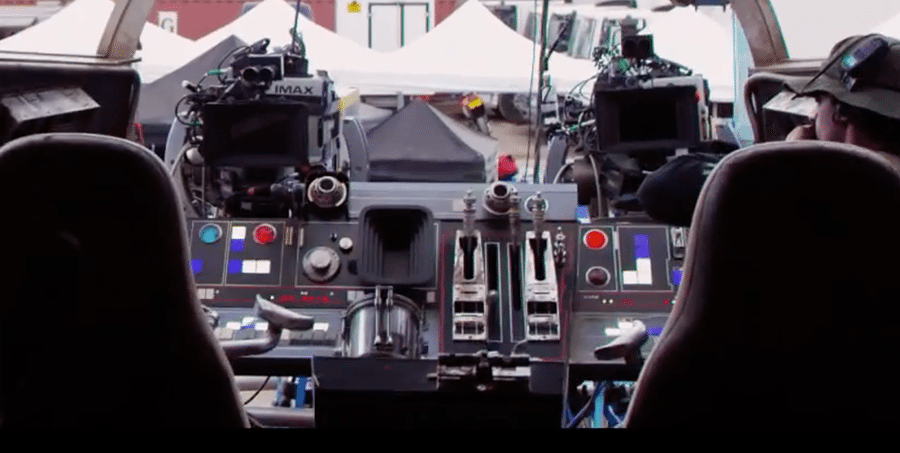 12. This is Admiral Ackbar. Not sure he’ll still be an Admiral by the time this plot takes place, but it’s him. I have no doubt.

13. This is probably Nien Numb. That’s the guy who flew alongside Lando in Return of the Jedi, helping take out the Death Star II, here now 30 years later. Sullustians don’t age much.

14. This is Princess Leia. This is the first time we’ve seen Carrie Fisher in full regalia for the film, in the film. Aside from her hand as she clasps a lightsaber, that is to say. I’ve lightened the arm patch of the man on the right, too, so you can see the rebellion phonenix (or Alliance Starbird, if you prefer).

We’ll see the next big trailer this Autumn. Until then – stay tuned to the toy sector. That’s where you’ll get your next clues and visuals! Stick around our Star Wars tag portal for the full mix.