Over the past few months we’ve been rounding up some of the most epic or otherwise nice-yet-affordable Star Wars gifts for this holiday season. What we’ve got is what you’ll see below. This list includes a Star Wars record player, an electric vehicle for kids, and some star wars stationary. Basically all levels of gift cost are included here – from the extremely inexpensive to the Favorite-Aunty-Costly.

NOTE A: While the above image may look like some sort of intergalactic white lipstick, it truly is not. Instead, it’s one part of the item below called “Star Wars: Jedi Challenges by Lenovo.” Go check it out and, if you want, go find some Star Wars lipstick somewhere. Don’t buy the Covergirl Star Wars stuff though, unless they’ve suddenly stopped selling products in countries that require animal testing. Poor bunny rabbits.

This year marked the 10th anniversary of Record Store Day here in the United States and also fell within the 40th anniversary of Star Wars: A New Hope. As such, Crosley released a fabulous special edition Star Wars turntable with A New Hope artwork on top. NOTE B: This is great for the hardcore Star Wars fan, but might not hit the right chord for the small-Star Wars, big-record collector – just keep that in mind!

If you can find this machine out there in the wild, know that its original price was right around $110 USD. And you don’t need to play records on it, necessarily. It also doubles as a Bluetooth-receiving speakerbox.

This entry on the list is one of my go-to items – a gift suggestion that never really gets old. Han Cholo makes some of the most fantastic jewelry I’ve ever seen in the “won’t cost ALL your money” category. And he’s created some super detailed Star Wars pieces over the past few years, too. 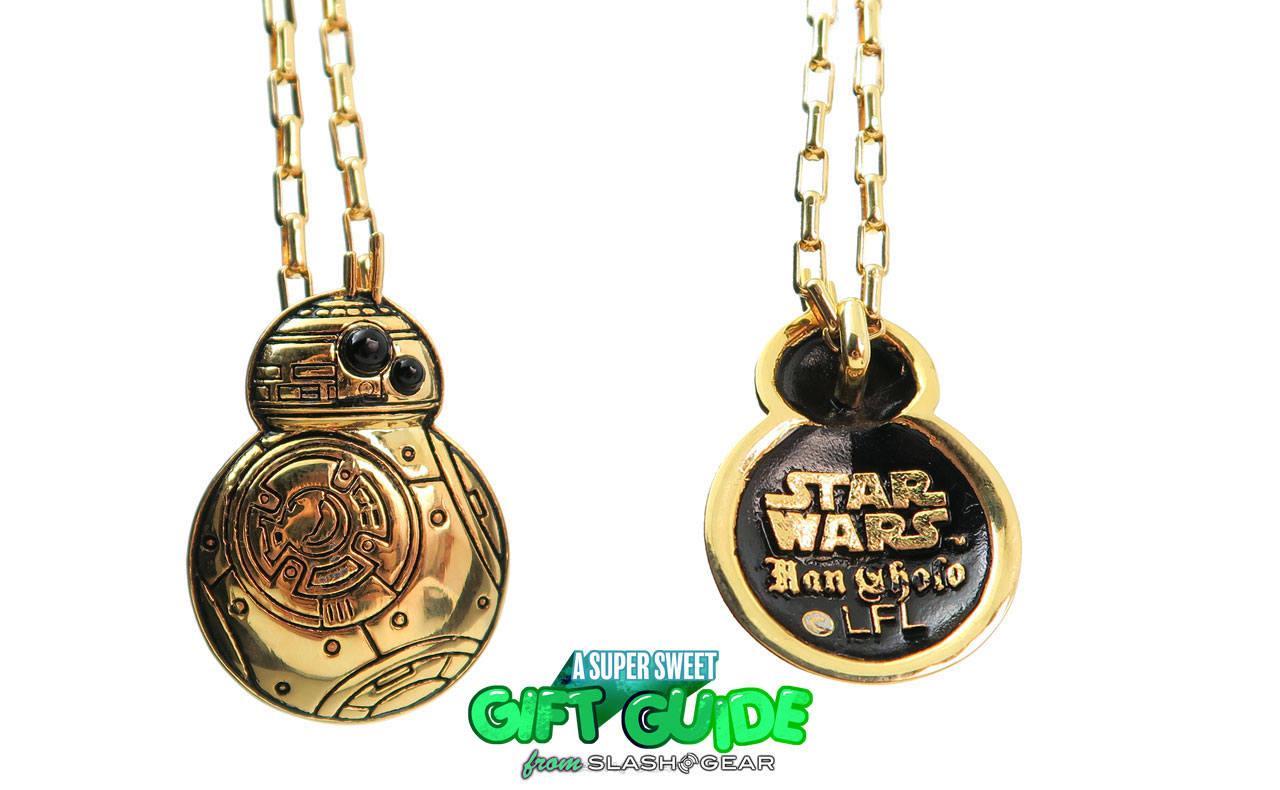 At Han Cholo you might have a bit of a time finding Star Wars items. Not because they don’t exist, but because it would appear that Cholo isn’t currently in the business of making new Star Wars items – or at least he’s not advertising as such. Get em while they’re hot!

This is one of those Going All Out gifts – the last gift to be opened on Christmas Day – the present your kids will flip directly over for. This is the Radio Flyer Landspeeder, and it’s amazing. This thing was first put out for sale back in September of this year – so you might need a little luck in finding one.

If you DO find one of these “Luke Skywalker’s Landspeeder” machines from Radio Flyer, keep in mind its original price. Toys R Us seems to have this most-excellent craft up for sale for $500 right this minute. NOTE C: See LEGO section NOTE D for add-on idea.

LEGO bricks are always a good toy for Christmas, Hanukah, Kwanzaa, Ramadan – or any other sort of celebration, really. Especially if it’s the sort of holiday where kids (or kids-at-heart) will be sitting around for hours at a time, waiting for the next meal and/or the time at which they’re able to smash more cookies. Star Wars LEGO bricks are even better than normal LEGO bricks, because they’re the best cross-branded products ever made. 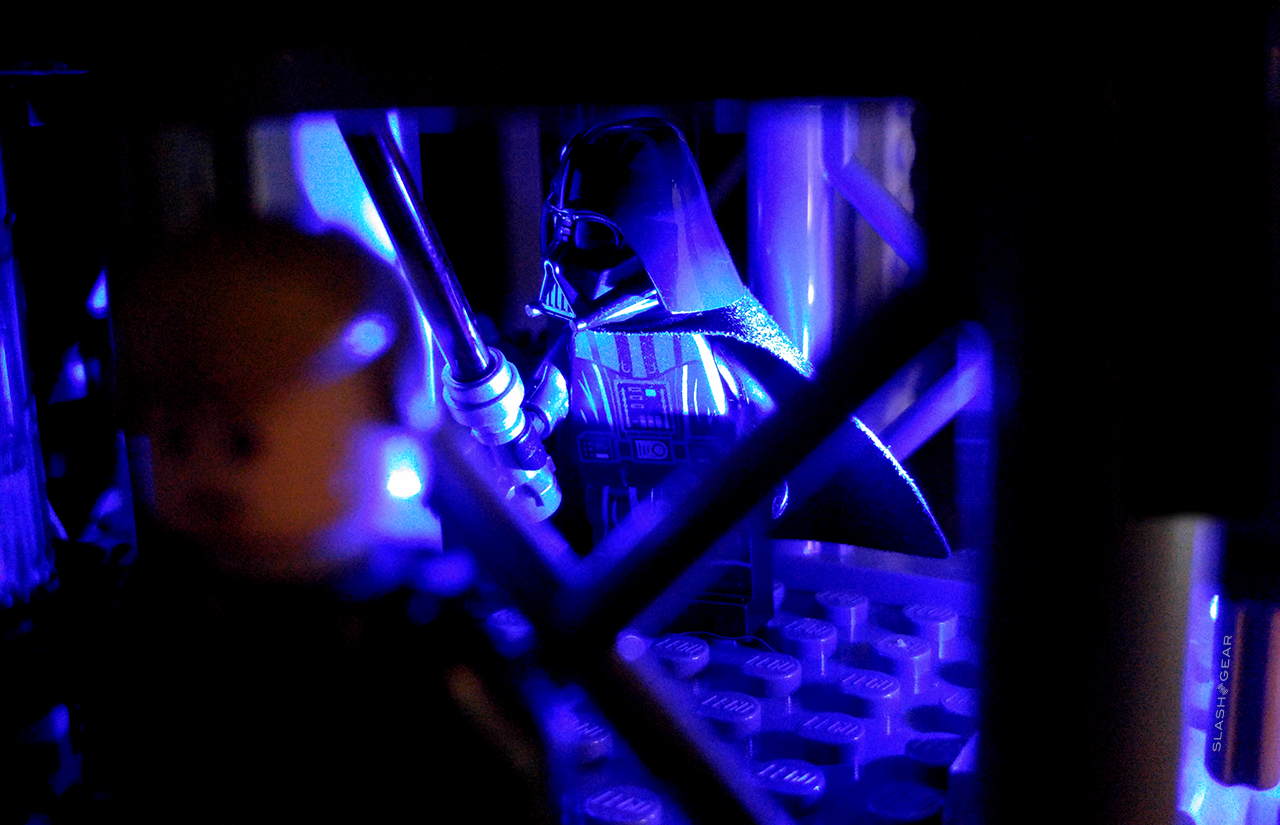 I have several suggestions for sets you might want to pick up for your loved ones. The first is the Death Star Final Duel for $80 – though that sets getting hard to find at this point. A slightly more recent set is Director Krennic’s Shuttle for $90 USD. 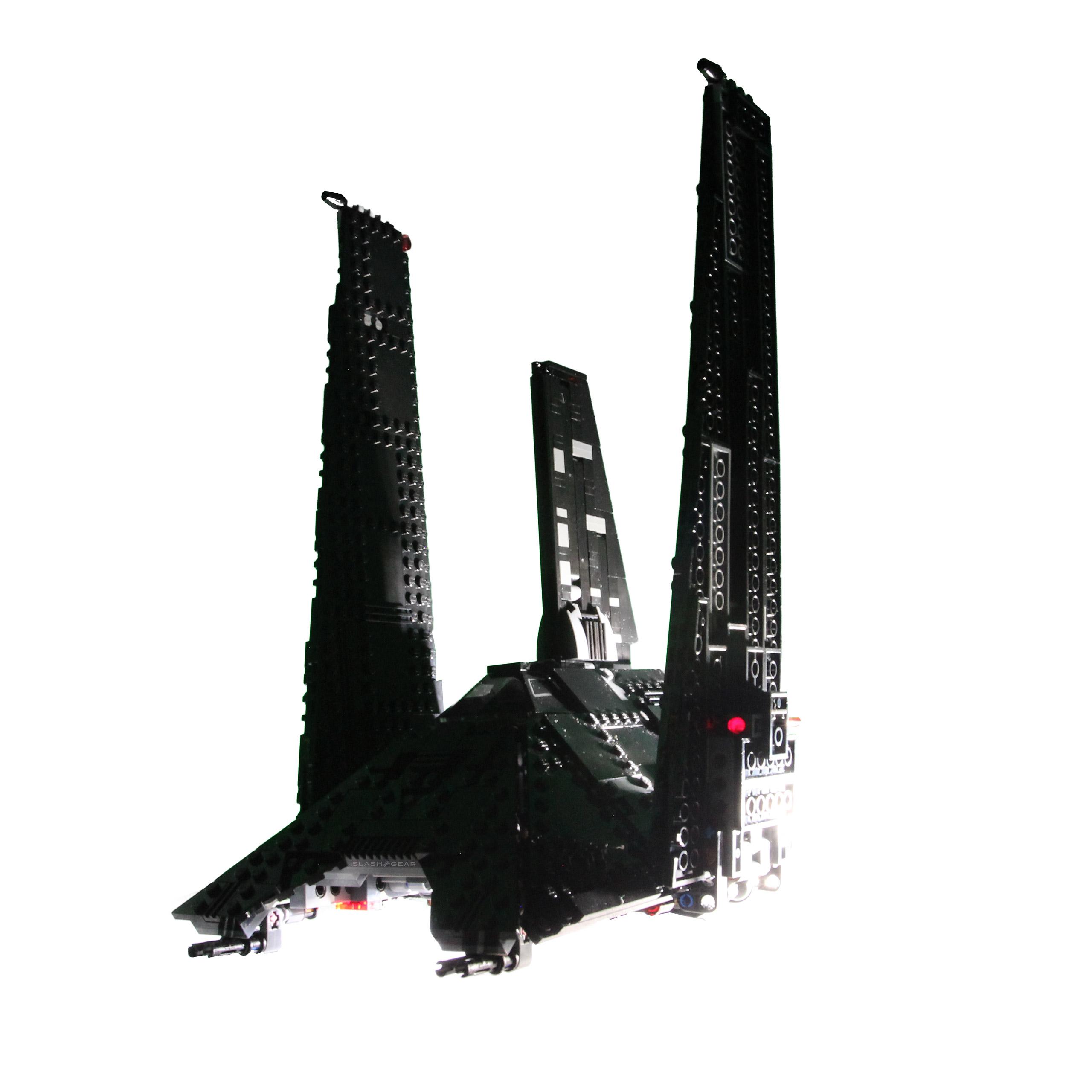 There’s also a bunch of “Star Wars: The Last Jedi” sets out now, all of which are pretty neat, and they come in a bunch of different sizes. NOTE D: If you’re giving the Landspeeder above as a gift, consider including the LEGO Luke’s Landspeeder along with it. The Radio Flyer isn’t really a winter sort of experience, so the smaller LEGO set will do well to suffice until the larger can be used outdoors. 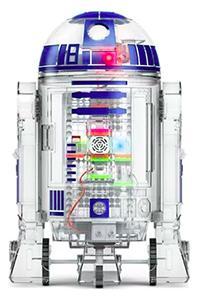 Much like LEGO, this toy is an ultimate “open IMMEDIATELY” present for Star Wars fans. This unit can be built entirely using the parts in the box – that includes the battery. Stickers can be used to customize the droid, and the Control Hub has R2-D2 sounds already installed.

NOTE E: This toy can operate without a smartphone, but you’ll probably want a smartphone to customize it. Without the phone, this droid can roll forward. It can also roll backward. That’s about it. With a phone (Android or iPhone), this droid can speak, roll backward, forward, left, and right, and can utilize the included proximity sensor to “use the force”. This set will run you a cool $100 USD.

Much like the Sphero BB-8, this Sphero R2-D2 is the Best Star Wars Toy Ever Made. Have a peek at our full Sphero R2-D2 Review to learn everything you need to know about this top-notch droid.

Because R2-D2 by Sphero is the best Star Wars toy ever made, it’s costly. You’ll be dishing out $180 USD for this beast – so make sure you’re not giving it to some little snot who’s not going to appreciate it! There’s also a R2-Q5 version of this toy – that’s basically The Empire’s Dark-Side version of this droid – for the same price.

This is an augmented reality headset with its own AR-friendly lightsaber, and it is no toy. This is an exceedingly impressive gaming system that allows the wearer to see virtual objects around them, including the light of the lightsaber and opponents with which to have lightsaber battles. This system also allows you to play Djerik Holochess, which might well be worth it all on its own. 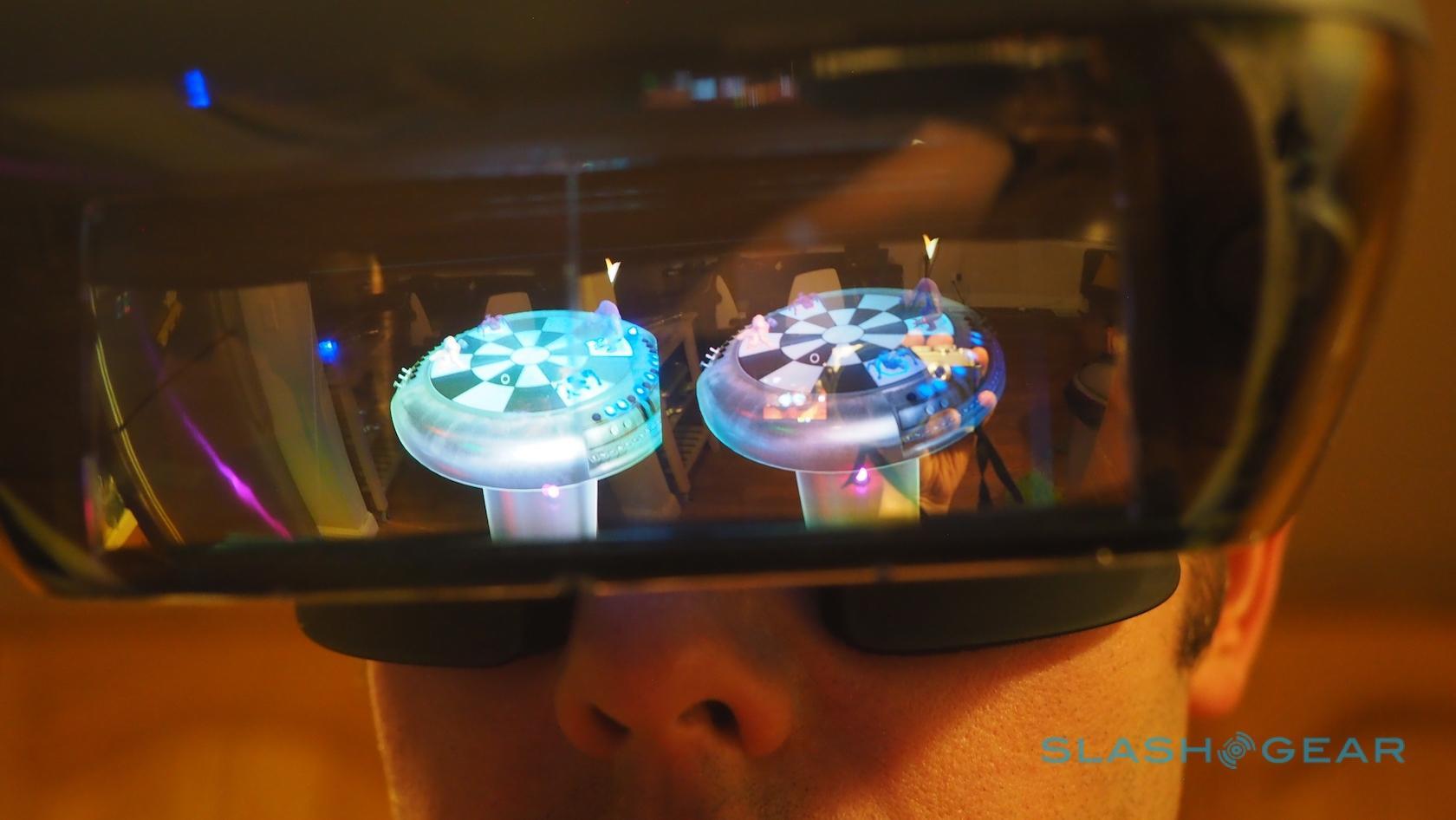 For more information on this headset and lightsaber set, head over to our Star Wars Jedi Challenges Review. And see all that’s included in this $200 USD experience.

The folks at Sheaffer make officially licensed Star Wars stationary stuff, and really great writing utensils, also with Star Wars upon them. I’ve got a few recommendations I’ve got for those of you that still use ink and paper and whatnot – I promise you and/or the person you were supposed to be buying gifts for will / would have really enjoyed the following items. 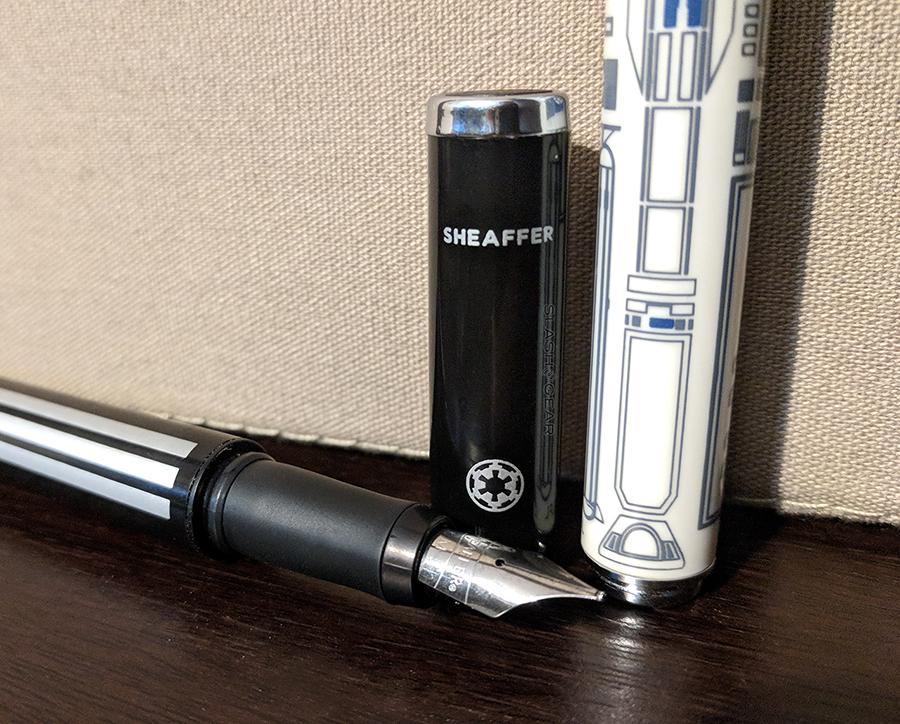 The Sheaffer Star Wars R2-D2 Pouch has a really excellently-printed watercolor-like R2-D2 on it, and it’s big enough to fit a whole load of colored pencils, or a bunch of Star Wars Micro Machines, if you’ve got a hankering for those. This pouch is available for right around $15. There’s also fountain or rollerball pens there for $23 or $20, respectively. They’ve got Darth Vader, R2-D2, and Yoda designs, each of them uniquely stylized for the pen.

There’s always our Reviews Portal for all sorts of oddities – mostly mobile devices, computers, and cars. Not that you’re going to be looking for cars to give as gifts for the holidays – but they’re there! Drop down into the Gift Guides portal for a whole bunch of other stuff, too!