Boba Fett’s own personal lowrider Slave 1 was made available as a 1,000-piece LEGO set at last. Note here that I’m using the lower-cased l, the number 1, and the upper-cased I interchangeably because different sites say different things, and different Gs use different keys. But here’s the deal – this is the most balanced version of Boba Fett’s spaceship offered yet. 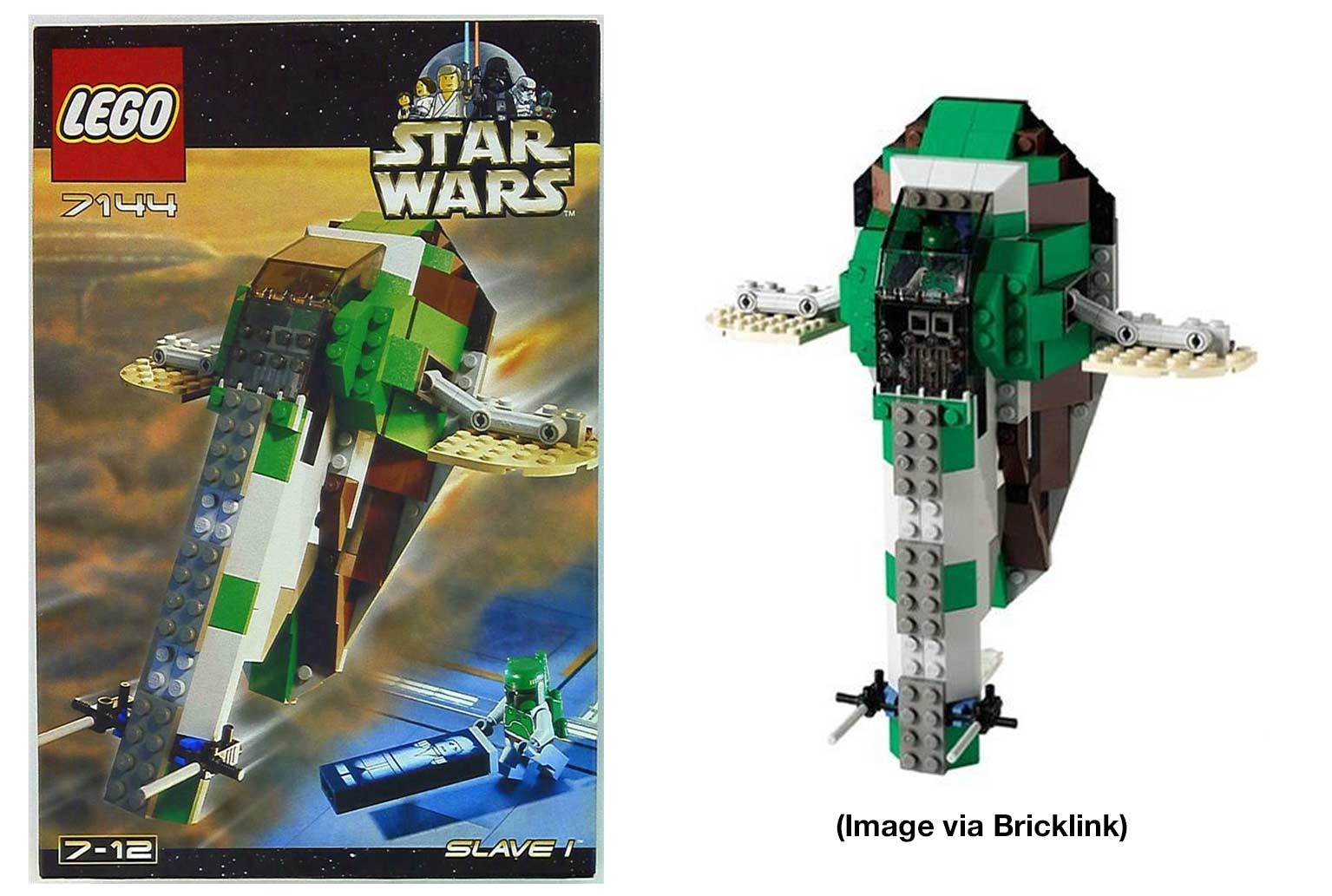 Another Slave 1 was released in 2006, this one with 537 pieces and a price of $50. The design here was largely similar to the Jango edition. These first three versions of the ship had Boba Fett wearing a cut-out mask with an all-black head and a rocket pack that was integrated with the helmet, all in one piece. Han Solo was delivered only in a flat printed one-brick piece of black carbonite – it was a tragedy!

In the year 2010 the LEGO Slave 1 set rolled into the modern age. Boba Fett had his proper helmet and an independent rocket pack piece, Han Solo was given a standard-sized block of carbonite, and the set was up to 593 pieces (for around $80 USD). 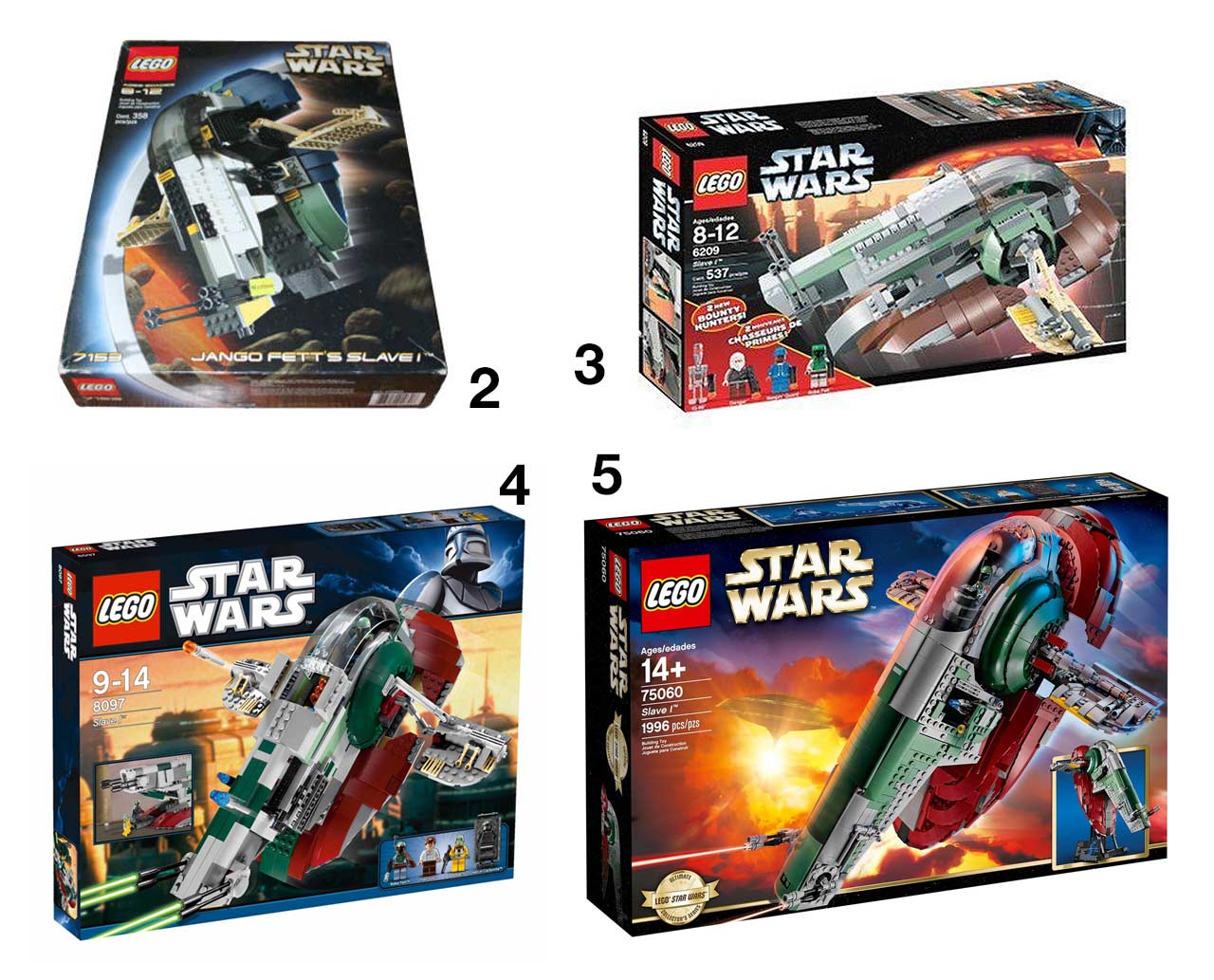 Fast forward to 2015 and we’ve got the big boss. The most massive Slave 1 was the UCS Slave 1, coming in at 1,996 bricks and a price of approximately $200 USD. This version has the same Solo in carbonite, but a slightly improved Boba Fett, with a lovely unique cape.

BONUS: There’s also YET ANOTHER Slave 1 in the massive 2812-piece Betrayal at Cloud City set, too.

This Slave 1 is part of the LEGO Star Wars 20th Anniversary collection. As such, it’s got a fancy box design and it comes with a “2000 Princess Leia” on a special LEGO pedestal. A set of these 2000-version LEGO minifigures can be attained by purchasing other sets, too. It goes Leia, Luke, Lando, Vader, and Solo – so fire up that wallet. 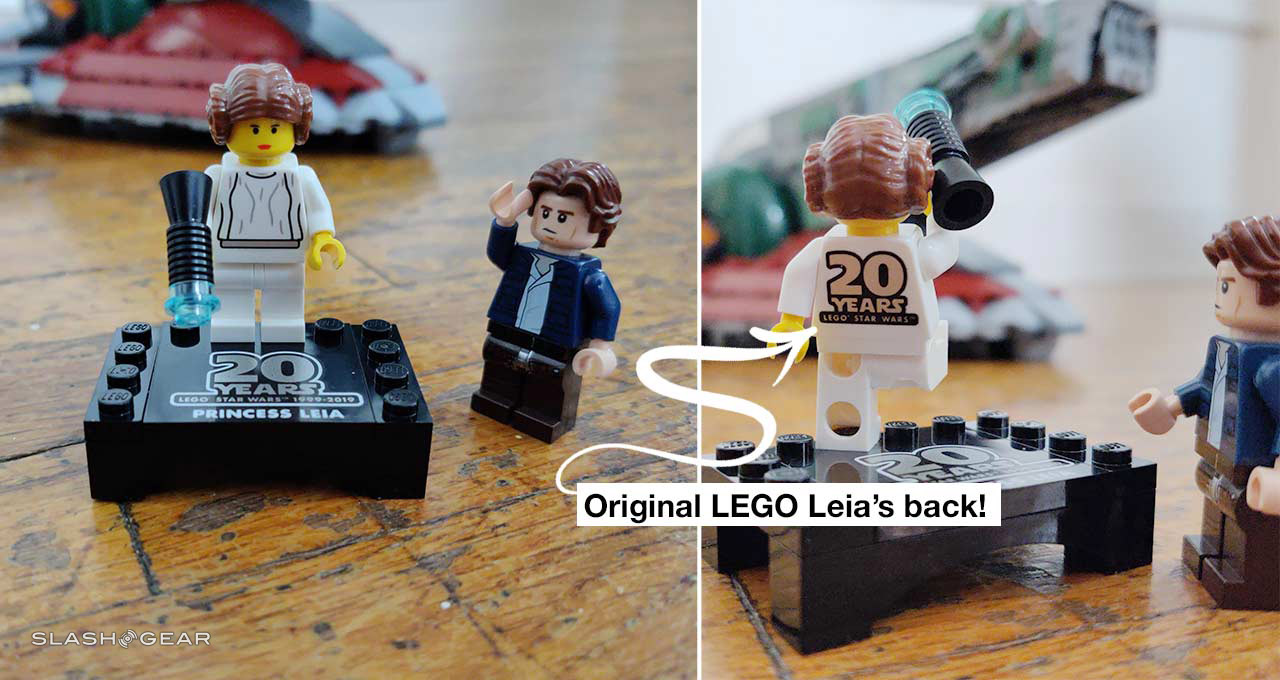 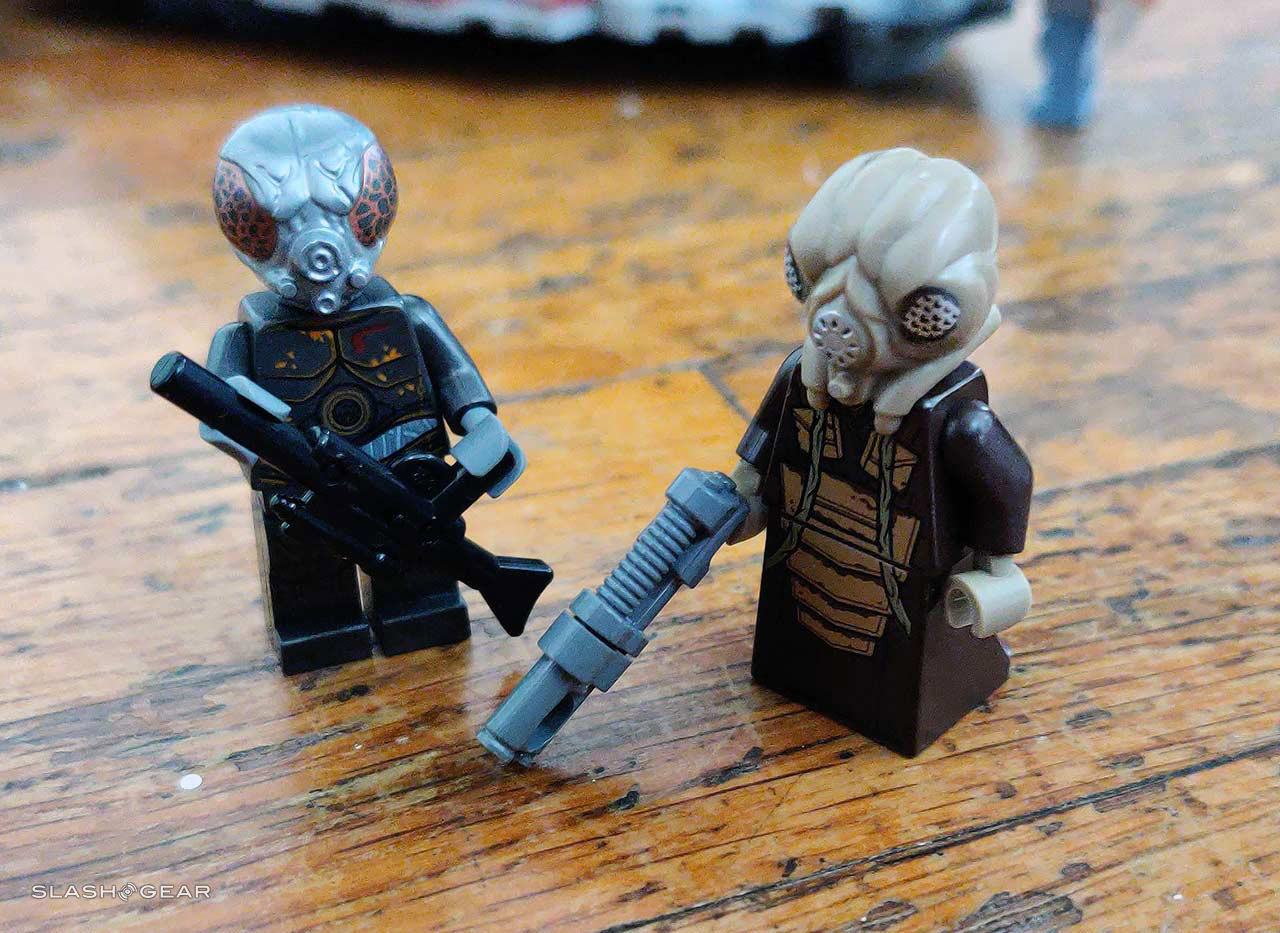 The rest of the minifigures in this set can be attained in other sets too, save Zuckuss. Zuckuss can be found elsewhere, but not with this specific molded head – that’s new new-for-April-2019, as LEGO puts it. There’s also a new left/right angled stone 3×3 – fancy! 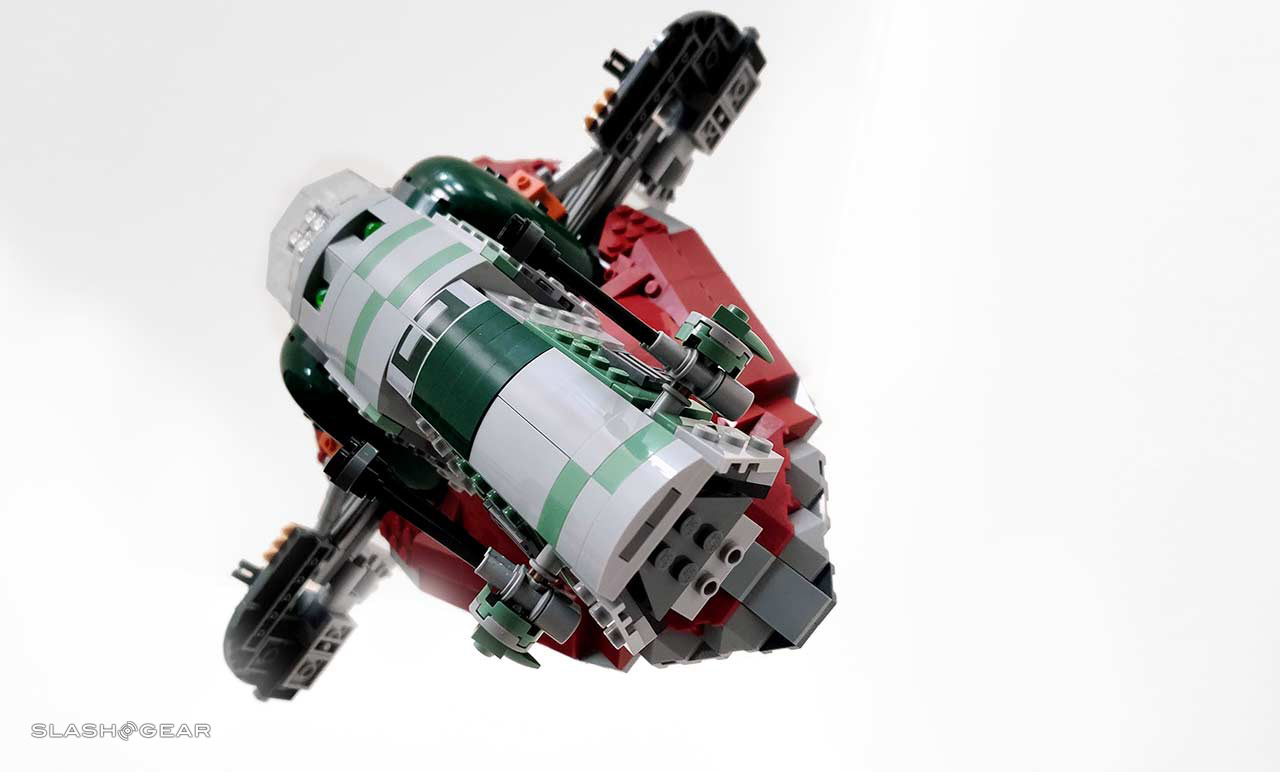 Because of the relatively odd way in which this spaceship is meant to fly, it comes with its own handle. If you’ve got an x-wing, you can just cradle the cockpit. With Slave 1, you’d need to hold the edges and worry about the wings and it’d just get awkward. 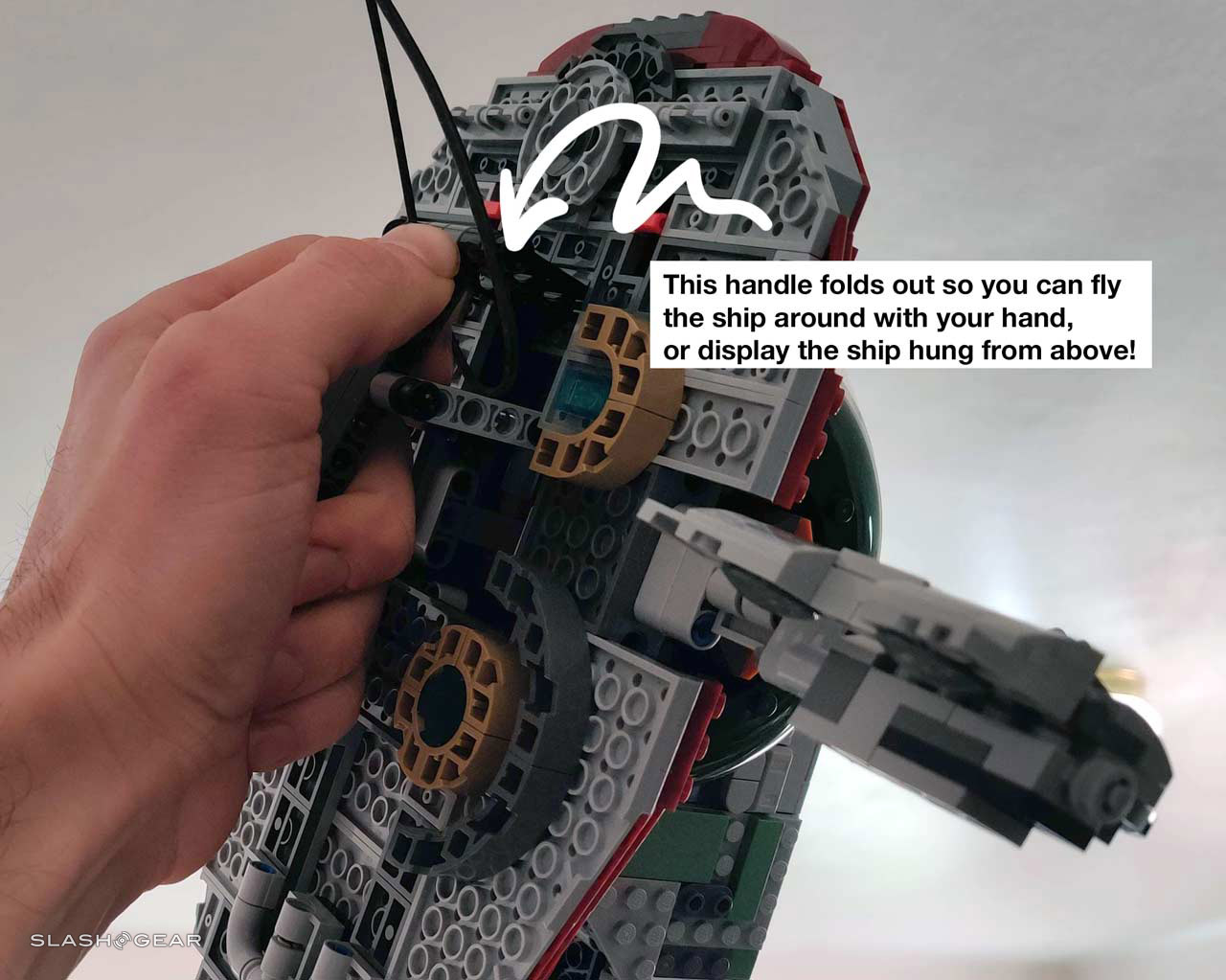 But the designers behind this LEGO set thought of this, assuming correctly that most LEGO set builders, after completing the build, will want to take this ship out for a spin. The ship’s construction is centered in a way that you’re able to hold the handle on its back and worry only very little about the possibility that you drop it and destroy all your hard work. 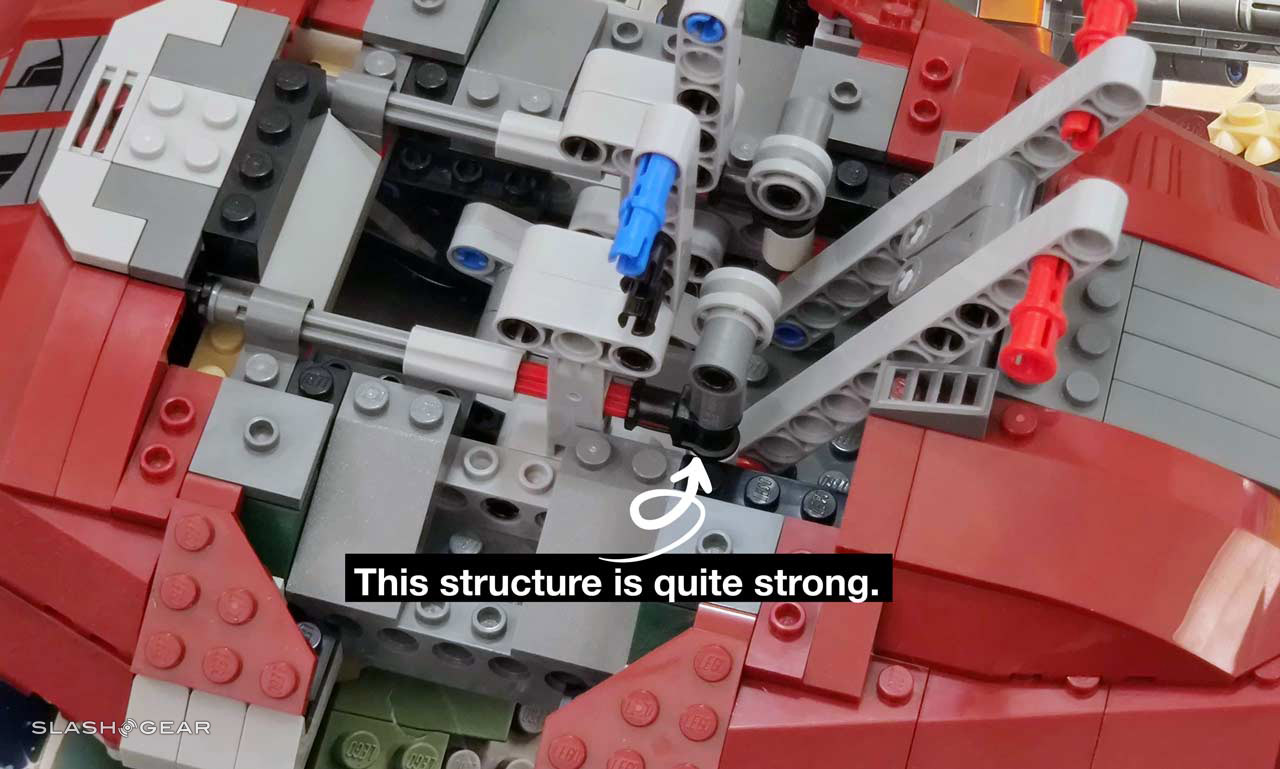 The back has a couple of independent triggers for otherwise standard spring-loaded shooters. Han solo (in carbonite) fits in the hull of the ship, and Boba Fett fits in a swinging seat up top. The swing is what LEGO describes as a “self-leveling cockpit seat” and it’s certainly a clever way of handling the oddity that is Boba Fett’s wacky spaceship. 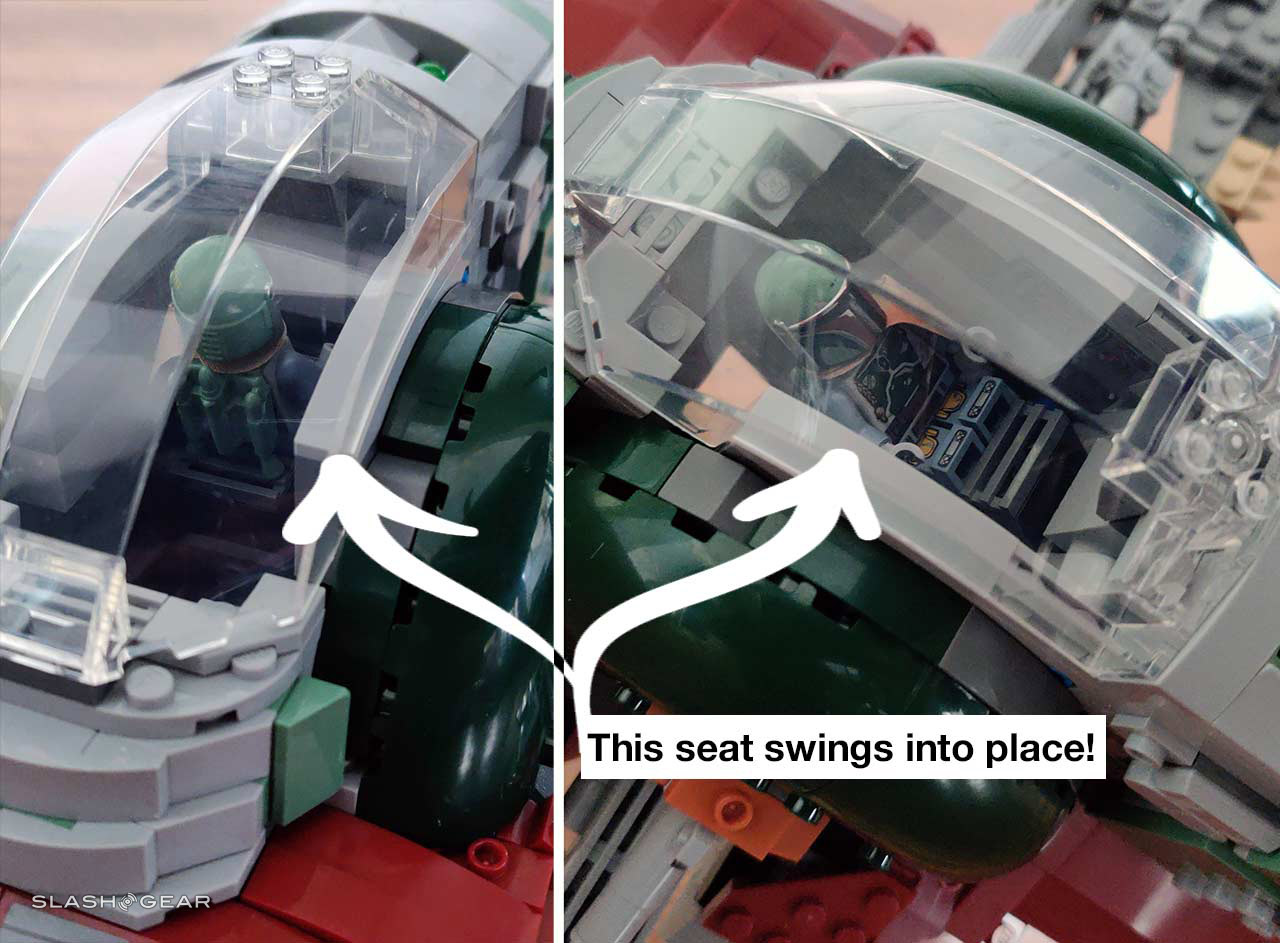 The wings also rotate, as do the “guns” at the chin of the ship. This Boba Fett also has the same most-updated look he had with the most expensive version of this set, complete with the fabulous new cape.

This set is the perfect balance of cost-for-completeness when it comes to Boba Fett action. If I had to have the absolute best version of the LEGO Slave 1, it’d obviously be the $200 set mentioned above. If I just wanted a most-modern version of the ship in a size that’s similar to the rest of my non-UCS sets, this is the one that’s best.

The value of the bricks (many of which are fairly uncommon) along with the best-yet versions of the key minifigures here make for a pretty good value proposition. And it’s Boba Fett, so what are you going to do, you know? 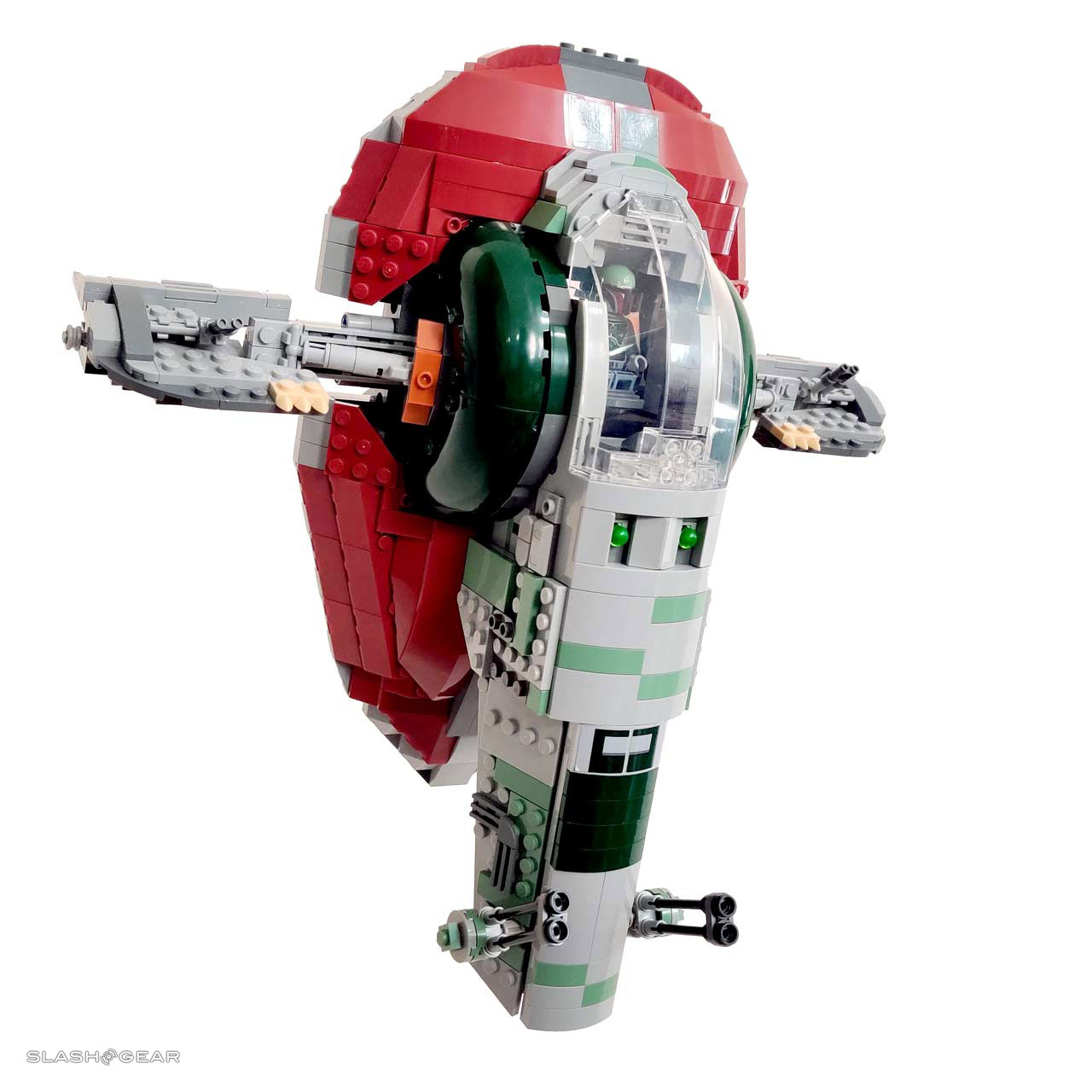 The entire LEGO Star Wars 20th Anniversary collection is out right this minute, both in department stores and at LEGO store locations (and online). This LEGO set is LEGO item 75243, and it has 1007 pieces (bricks or otherwise).

You’ll find this set available for right around $120 USD here at launch. If you head over to the LEGO Store online on May the 4th (the day this review goes live) you’ll find Star Wars sales, and free stuff with purchase. Of you could probably still buy the original for its original asking price of $20 on eBay – or both!