SpaceX‘s second Dragon capsule to run a resupply mission to the International Space Station has been successfully captured by the orbiting platform’s robotic arm, despite launch issues that threatened to leave the cargo shuttle without solar power. Snatched from orbit an hour ahead of schedule, the next step for Dragon is being guided into place to dock with the ISS, at which point nearly a month of loading and unloading will occur.

Dragon didn’t go up into space empty-handed. Onboard the reusable craft there’s almost 1,300 pounds of cargo, including scientific experiments, new equipment, and supplies for the astronauts currently living on the space station. They’ll all be offloaded, and then Dragon packed up with a return load of equipment and spent supplies before beginning its journey back to Earth at the end of the month.

At one point, however, the whole mission looked to be on shaky ground. After a successful takeoff on Friday, shedding the first and second stage rockets, Dragon’s thruster pods did not react as they were meant to. That meant the all-important solar arrays could not be unfurled. 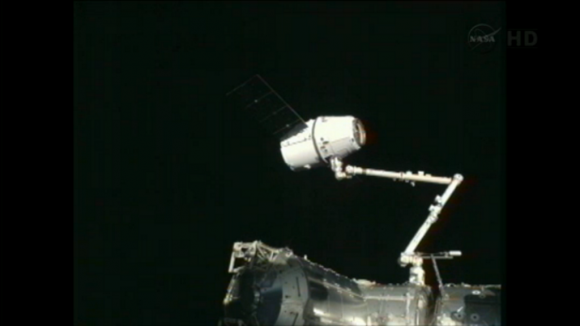 “Falcon 9 lifted off as planned and experienced a nominal flight” SpaceX told us in a statement. “After Dragon achieved orbit, the spacecraft experienced an issue with a propellant valve. ”

After some remote tinkering, all four of the pods were triggered and the craft could make its way to the ISS. Final approach began at 2am EST, with the actual grapple coming early at 5:31am EST.