SpaceX and NASA’s second Dragon resupply mission to the International Space Station successfully blasted off on its way into space, but encountered unexplained issues roughly twelve minutes into launch. Taking off at 10:10AM EST today to take new equipment and supplies to the orbiting astronauts, the Dragon capsule, climbing at 1km per second atop a cluster of nine rockets, is carrying around 1,268 pounds of cargo and had been expected to dock with the ISS on Saturday, March 2. Update: More on the launch issues after the cut.

There, Expedition 34 commander Kevin Ford and Flight Engineer Tom Marshburn of NASA had been expecting to snatch it from the sky with the station’s robotic arm. The exact issues around the problem are unclear at this point. 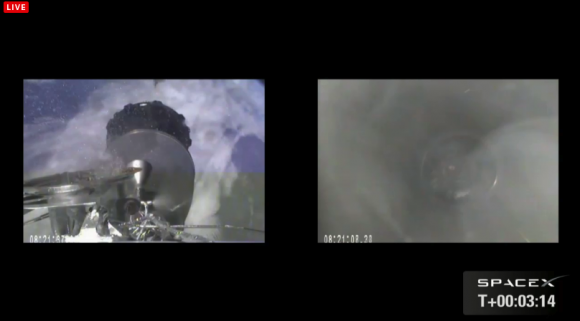 However, a few minutes after that point, the launch veered from the original plan. The video stream switched from Dragon back to the second stage, and then SpaceX cut the webcast, with a spokesperson saying that an unexpected problem had affected the capsule and that the team would be working on figuring out what was happening. 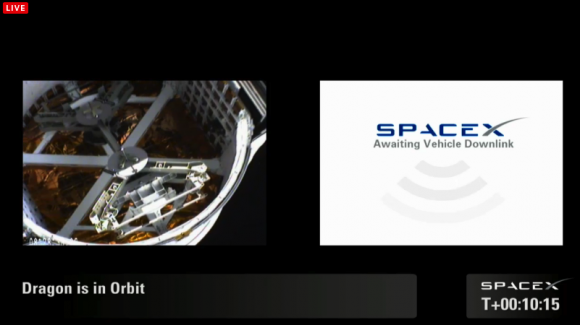 As well as food and other essentials for the ISS crew, the Dragon capsule is packed with scientific experiments, including both biological and physics tests. On the biology side, there’ll be experiments to see how plant cells react in low-oxygen environments, as well as in microgravity, which NASA says will be instrumental in developing potential food sources for longer trips, such as to Mars.

On the physics side, there’ll be tests to see how molten metals solidify in microgravity, which could potentially open the door to new types of materials. Procter & Gamble is also funding some research, into how microscopic particles clump and gather in liquids and gels.

SpaceX and NASA will hold a press conference in several hours time to discuss the issues Dragon is facing.

Update: We’re hearing that the problem is that the solar panels on the Dragon capsule did not unfurl as expected, though we’re yet to see official confirmation on that from either NASA or SpaceX.

Update 2: SpaceX’s Elon Musk has tweeted that there is an “Issue with Dragon thruster pods. System inhibiting three of four from initializing. About to command inhibit override.”

Update 3: SpaceX has given us the following statement:

“One thruster pod is running. Two are preferred to take the next step which is to deploy the solar arrays.  We are working to bring up the other two in order to plan the next series of burns to get to station.”

Update 6: SpaceX gave us the following follow-up statement on its progress:

“Falcon 9 lifted off as planned and experienced a nominal flight. After Dragon achieved orbit, the spacecraft experienced an issue with a propellant valve. One thruster pod is running. We are trying to bring up the remaining three. We did go ahead and get the solar arrays deployed. Once we get at least 2 pods running, we will begin a series of burns to get to station.”