Last year, Sony brought the HMZ-T2 to IFA and tried to convince us to wear a 3D display helmet; at IFA 2013, the company is hoping that cutting the cord with the new HMZ-T3W will persuade us to open our wallets. As before, the concept is straightforward: two small OLED screens that give the impression of a much larger display, optional 3D, and the privacy of your own virtual screening room. This time around, however, at least one of the cords has disappeared, though it’s not quite the wireless nirvana Sony might like you to believe.

The resolution of each OLED panel hasn’t changed, and so you still get 720p 1280 x 720. However, Sony has tweaked both the software that drives them and the lenses in front of them, and so the overall quality is said to have increased. We couldn’t test old versus new side-by-side, but the colors and brightness looked good from the smartphone source plugged in.

That input option is the big improvement in this new generation. The HMZ-T3W now supports MHL HDMI input from a smartphone, basically replicating what’s on-screen on the handset in the headset. That means there are no limits on what you can see: you get media playback, of course, but if you want a big screen browser experience you can have that, or games, or anything else. 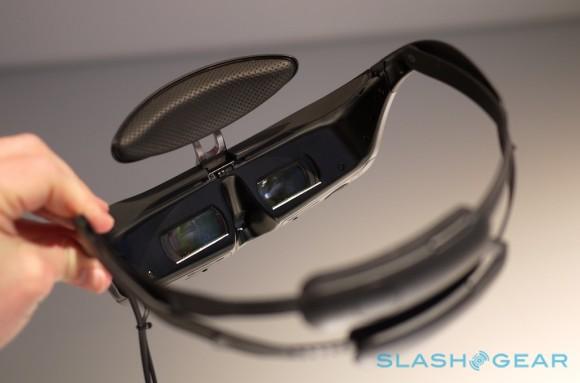 As before, the controls are all underneath the visor section, and large so that your fingers can find them without having to actually look. Two large sliders control the adjustment of the optics, though we couldn’t change them to the point where we could avoid wearing our prescription glasses in order to see the screens clearly.

There’s also a joystick to navigate the menus and large volume buttons. Sony has opted to bundle a new set of headphones, the MDR-XB90, and they work with a new 32-bit DAC that can produce virtual 7.1 surround sound. 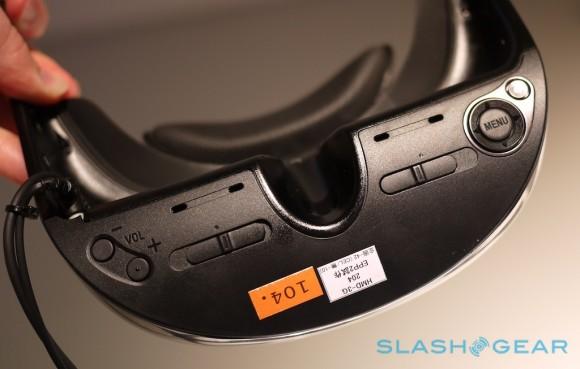 The wireless part comes down to how the headset connects to the controller box. The latter is a chunky black slab into which you plug your source – either a microHDMI most likely from your phone, or a regular HDMI from, say, a Blu-ray deck or something else – and handles all the processing; it uses a WirelessHD module from Silicon Image to beam video to the headset.

Both headset and controller have an onboard rechargeable battery, though how long they last depends on the nature of the source and the connection. Figure on at most three hours, however. 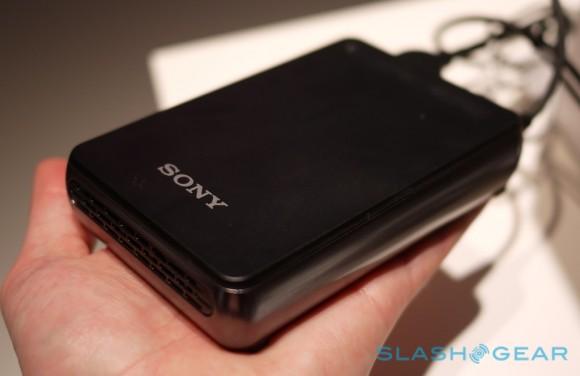 Overall, comfort has been improved, thanks to a slight reduction in weight and a redesigned headband which is more flexible at the back and better positioned at the front. It’s still a somewhat heavy experience, however, especially when you factor in the headphones.

It’s worth remembering that Sony intends the HMZ-T3W to be a personal entertainment system, not an augmented reality one. There’s no front-facing camera, no way to pipe through a live view of the surrounding environment and overlay computer graphics, and if you try walking down the street wearing it, passers-by won’t know whether to laugh because of the oversized helmet or because you keep bumping into things.

They may also judge you based on how much you spend. The Sony HMZ-T3W will be priced at a not-inconsiderable £1,299.99 when it ($2,035) when it arrives in the UK in November, which may explain the company’s reluctance to commit to a US release.