Sonos has cut the cord on its second portable speaker, with the Sonos Roam promising multi-room integration inside the house, Bluetooth streaming outside it, and a much more affordable price tag. About the size of a water bottle, Roam works as a smart speaker too with support for Amazon and Google’s voice assistants, and Sonos is hoping it acts as much a gateway to new users as it appeals to existing ones looking to expand their system.

It’s not Sonos’ first portable speaker, of course. Back in late 2019 it launched the Sonos Move, offering both integration with your other home speakers and Bluetooth functionality for outside of the house. At the same time it introduced Auto Trueplay, a self-calibrating version of the company’s automatic EQ system. 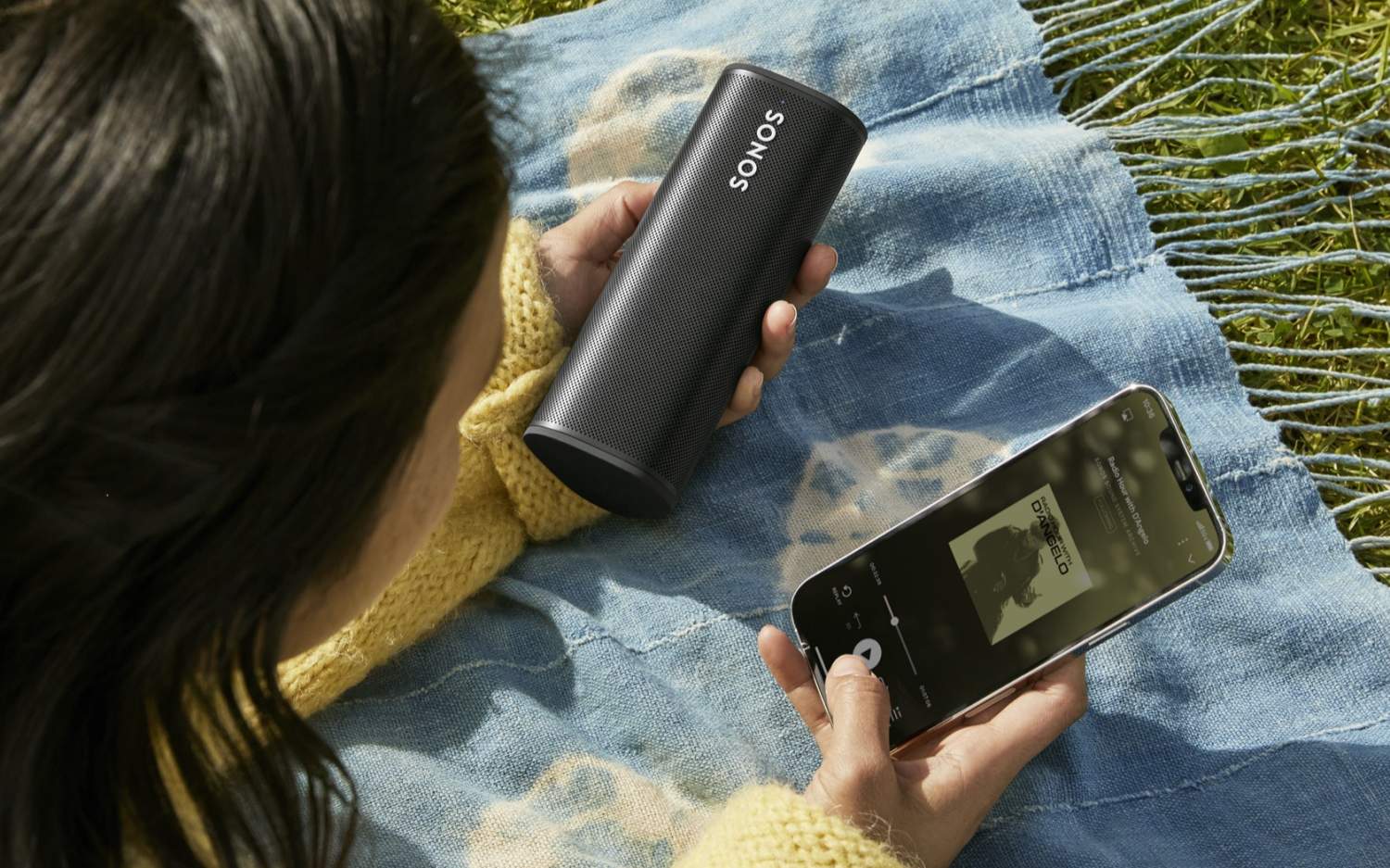 Problem was, all that cost $399. Not outlandish for a Sonos product, no, but undoubtedly premium among the majority of Bluetooth speakers. Move sounds great, and it’s super-flexible if you’re a Sonos enthusiast, but it’s a tougher pitch for someone unfamiliar with the platform and who might simply be shopping for a mobile speaker.

Sonos Roam arguably takes on an even bigger challenge. It has to excel as a Bluetooth speaker, but it also can’t stint on the sound quality and functionality that Sonos fans expect. It’s also, at $169, the company’s cheapest product, not to mention its lightest. At 0.95 pounds and 6.61-inches tall, it’s about a sixth of the size and weight of Move. 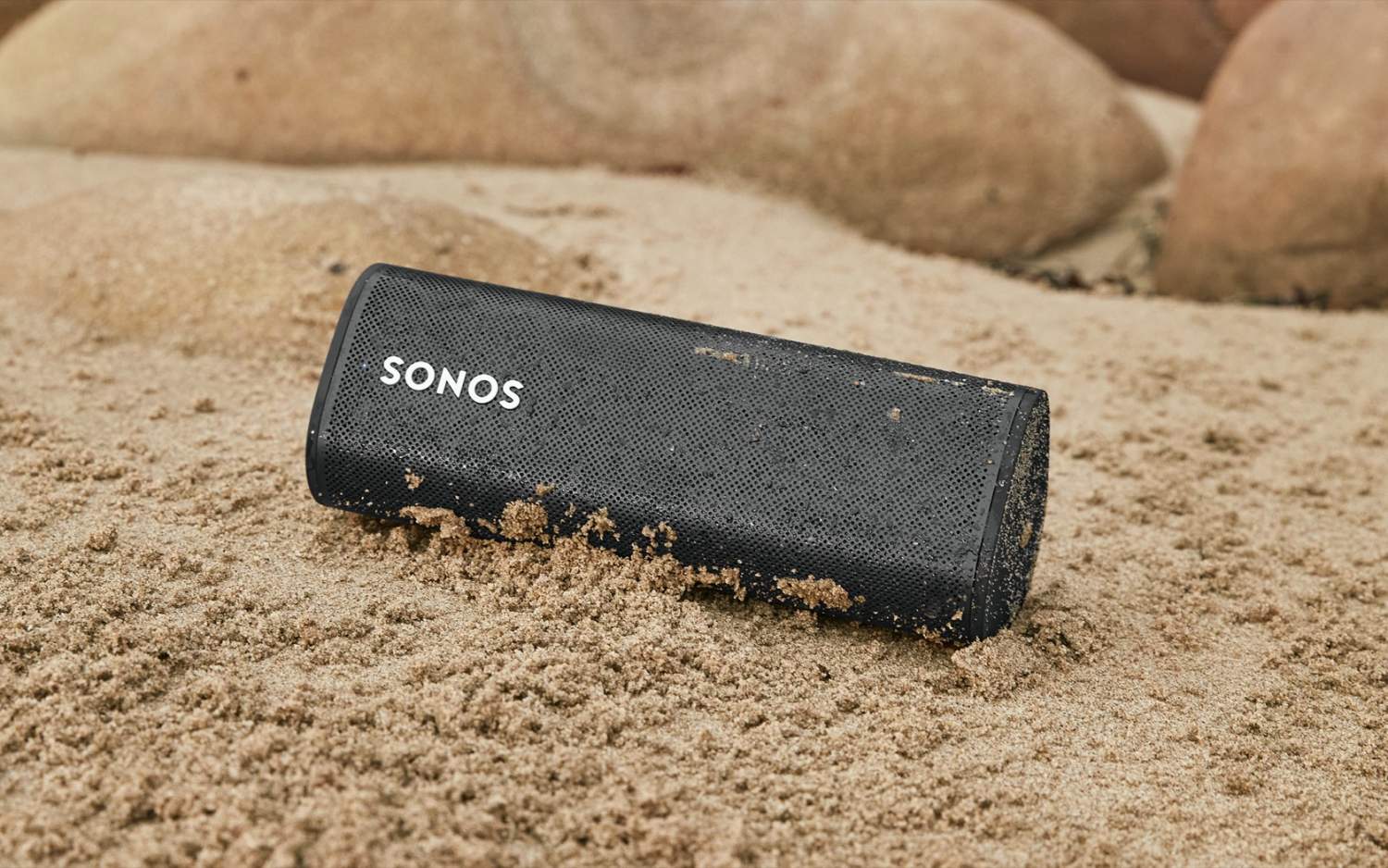 The outside is instantly recognizable as a Sonos device and, like Move before it, Roam doesn’t go overboard on “rugged” visible cladding or chunky rubber bumpers like a lot of portable Bluetooth speakers do. It’s still IP67 water, dust, and shock resistant, however, meaning it’ll withstand getting dunked in a pool or washed off after a trip to the beach. The end caps are slightly concave, which Sonos says helps avoid accidental button-presses of the raised play/pause and volume keys.

Behind the honeycomb grille there’s a tweeter and an elliptical mid-woofer, using custom neodymium motors. Roam will play in mono, regardless of the orientation at which you place it, but the triangular cross-section means when it’s on its side on the desk, counter, or floor, it should project sound up toward you. Though it’s obviously small – the company says Roam should sound much like a Sonos One does, albeit with less power at maximum volume – it still went through the tuning process with the Sonos Soundboard creator community, music professionals who compared playback through the portable speaker with how they mastered the original tracks in their studios. 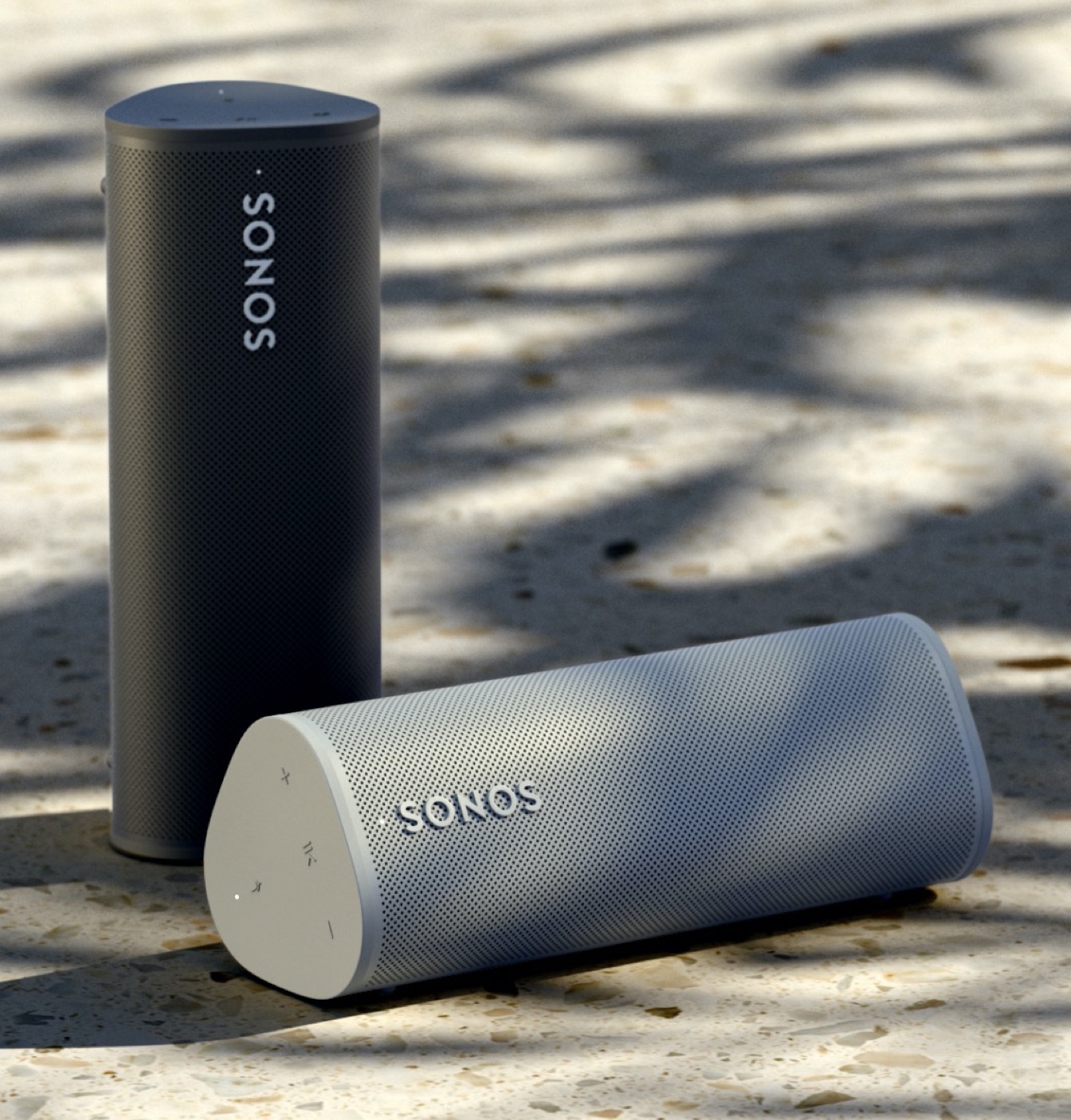 It’s clear Sonos has learned from some of the criticism and feature requests that Move prompted. Roam expands Auto Trueplay so that it’ll work not only when the speaker is on your WiFi network, but during Bluetooth playback too. It’ll tweak the EQ settings whenever you move Roam, using accelerometers to detect its orientation, though you can still manually adjust treble and bass in the Sonos app.

Where Move has a button on the back which switches between WiFi and Bluetooth modes, Roam promises to handle that handover automatically. If you take the speaker outside of your WiFi network, it’ll switch to Bluetooth by default. When you return, you can either leave it to keep streaming over Bluetooth, or press and hold Roam’s play button to automatically “throw” what it’s playing to the Sonos speaker in the house that’s physically nearest. It works in reverse, too, shifting playback to Roam, or you can use it as a Bluetooth line-in, sharing its audio with the rest of your Sonos system. 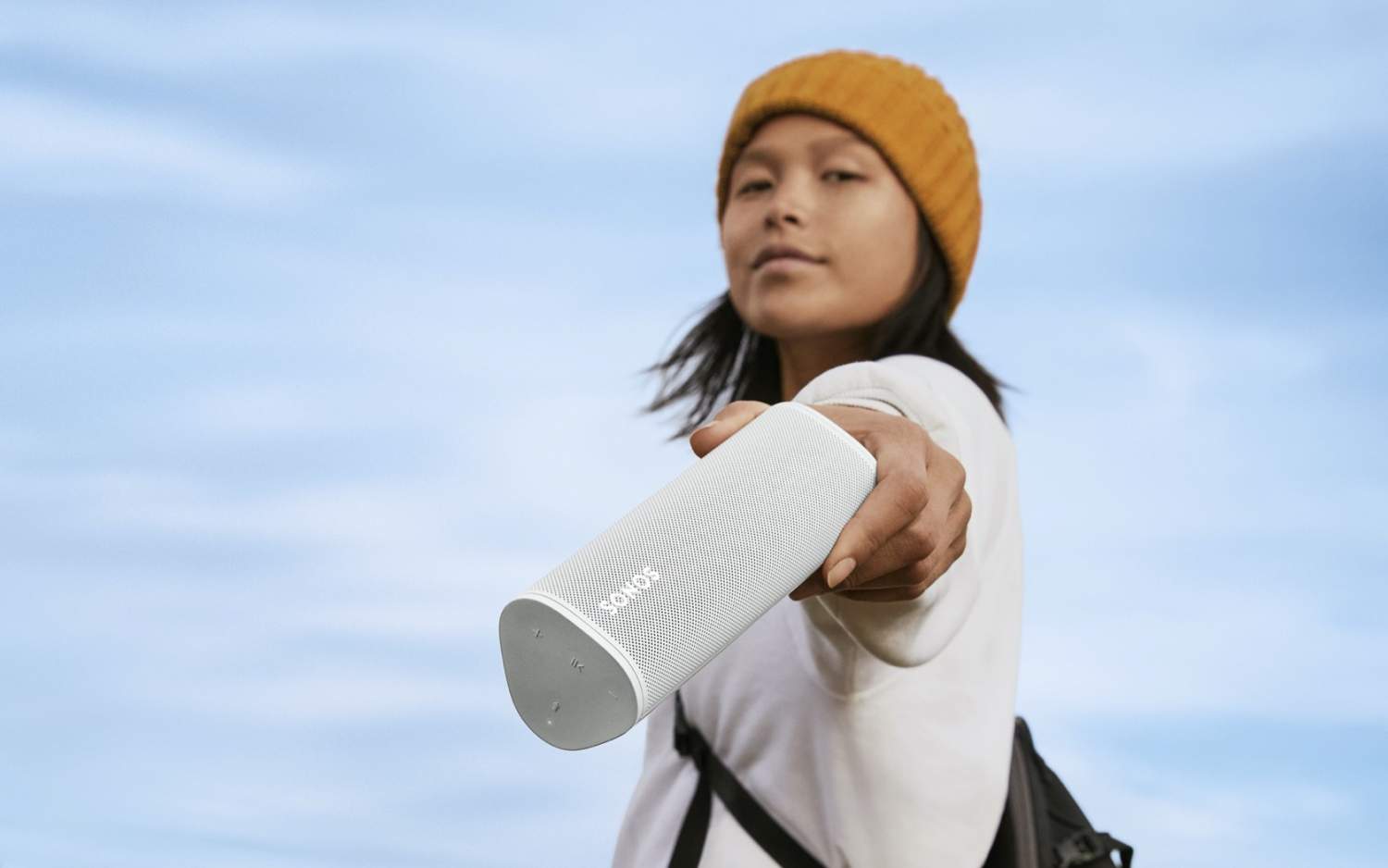 As you’d expect, you can group Roam with other Sonos speakers, and pair two units together for stereo playback (albeit on in Sonos mode, not for Bluetooth playback). There’s Apple AirPlay 2 streaming, and support for the Google Assistant and Amazon Alexa. Courtesy of the Sonos app you get access to Sonos Radio; it won’t, though, act as a speakerphone as there’s no microphone for voice calls.

Roam will charge on any Qi wireless pad – Sonos recommends a minimum of 10W – though the company also has its own with built-in magnets to hold the speaker in place. That means you can still charge the speaker whether it’s upright or on its side. Sonos’ wireless charger uses Qi but it’s not actually certified: the top is slightly convex, to nestle into Roam’s concave base, so while it’ll charge other Qi-compatible devices they’ll have to balance on the top first. 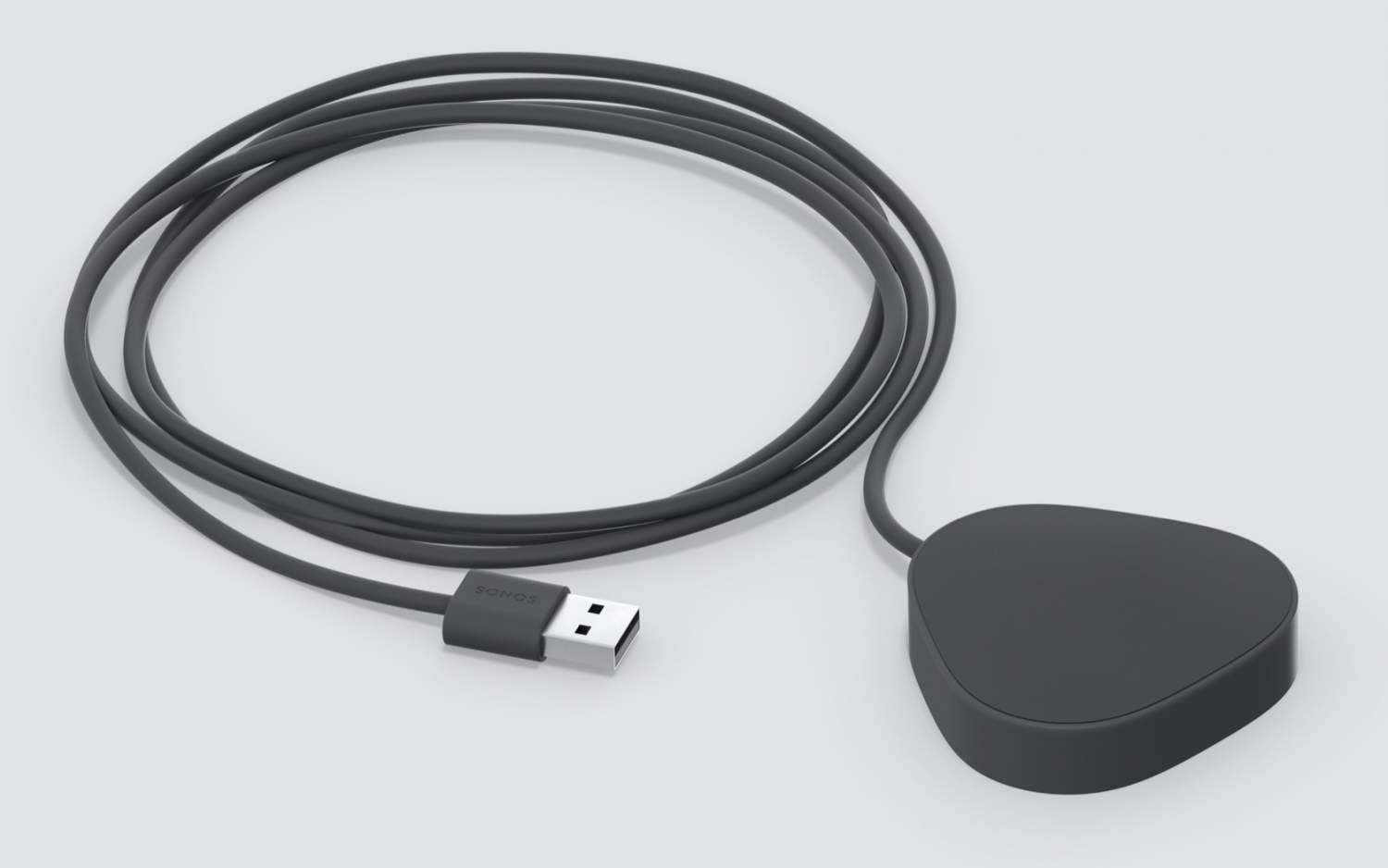 A full charge is good for up to 10 hours of playtime, Sonos says, or 10 days in sleep mode. Roam will automatically switch into that low-power mode when the music stops, but can wake back up in less than a second. If you don’t have a wireless charger, you can use the USB-C cable in the box.

Sonos is counting on all that to coax new users into its ecosystem. One of the challenges Move faced was convincing those looking for a portable speaker that they should spend significantly more on Sonos’ vision of that. Existing Sonos owners may have already appreciated its added benefits, but multi-room control is one of those things that really needs to be experienced to fully appreciate. 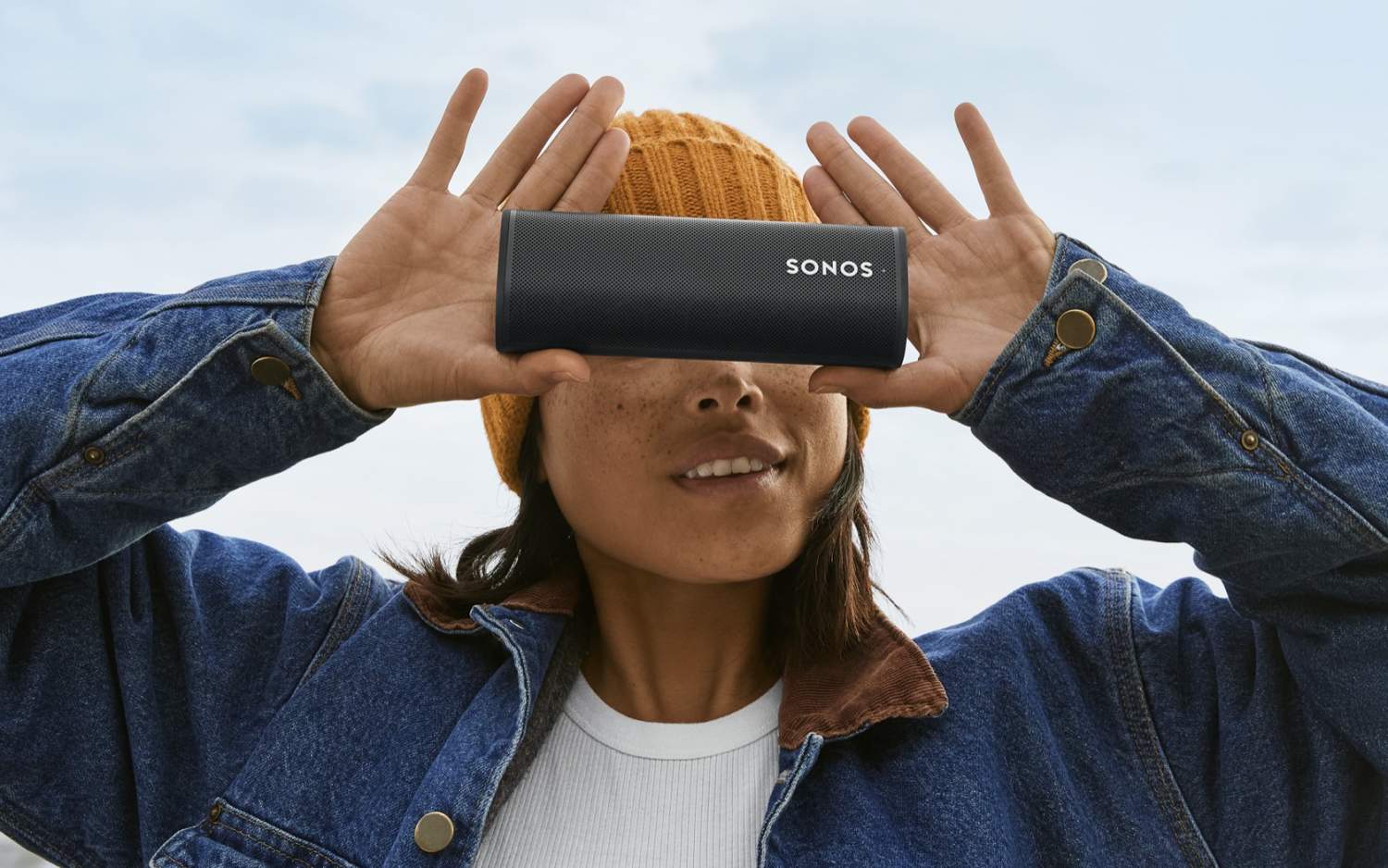 At $169, however, Roam is a lot closer to the Bluetooth speaker mainstream. It’s available to preorder today, in black and white; the Roam Charger is sold separately, at $49, with colors to match. They’ll ship from April 20.