Sonos Arc Review: Dolby Atmos in the soundbar we’ve been waiting for

The problem with making things look easy, Sonos has discovered, is that peoples’ wish-lists only ever get longer. The new Sonos Arc is a textbook example: on the face of it a simple response to the question “Where’s the Sonos Dolby Atmos soundbar?” it nonetheless required a whole new platform and, as a side-effect, leaving some of the company’s earliest adopters peeved. When you’re responsible for that sort of disruption, you have to live up to the hype.

The challenge was fairly obvious: though there had been tweaks and updates over the years, Sonos’ platform could effectively trace a direct line back to the company’s first-generation hardware, and as such simply lacked the support for high-resolution audio formats such as Dolby Atmos. Sonos S2 changes that, new software that – among other things – enables Atmos support, but in the process is just too much for the very earliest Sonos hardware. 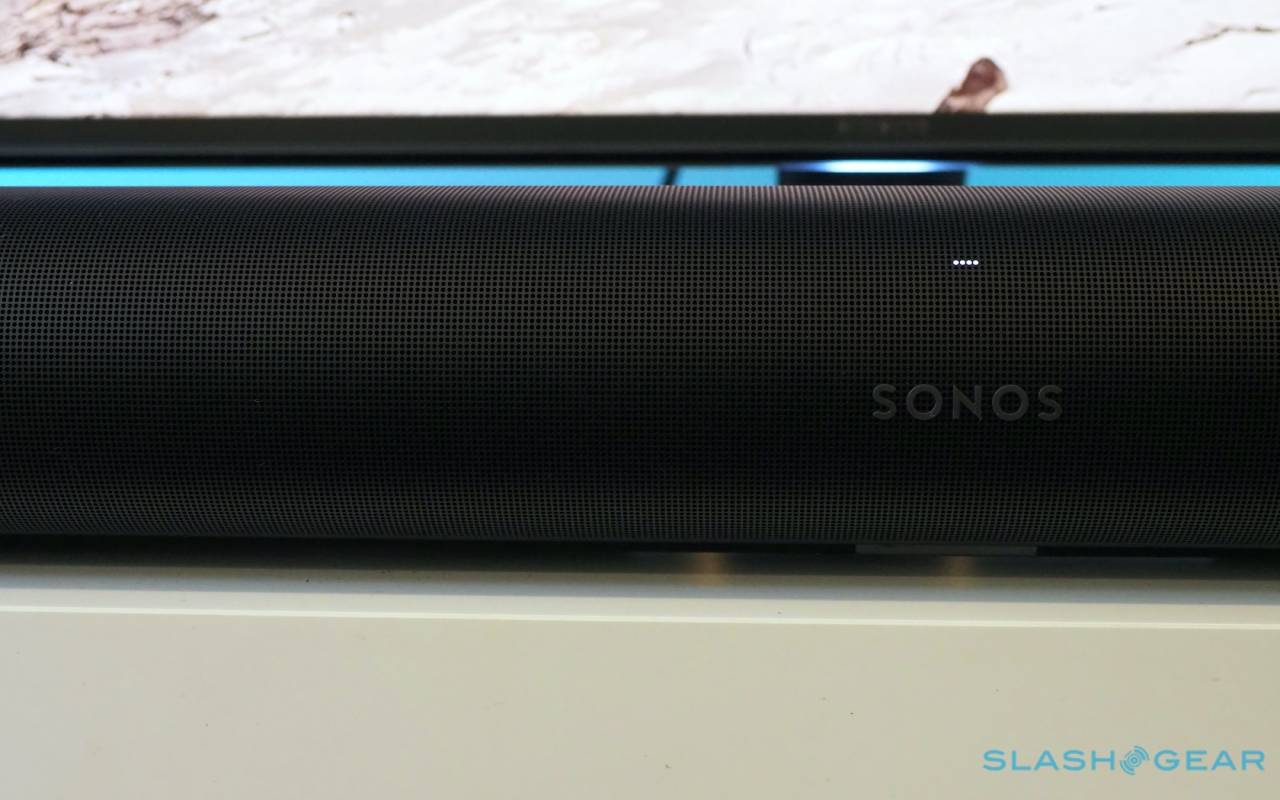 The backlash, backtracking, and workarounds have been well documented since, but here’s the core of it. The Sonos Arc is the flagship example of what Sonos S2 is capable of, a $799 soundbar that attempts to do the near-impossible. Bring together not only the cutting edge in home entertainment audio, but do it in a way that’s easy to use and won’t offend the eyes in your living room.

There’s something distinctive about Sonos’ design language, even if it doesn’t shout. The color-matched logo is subtle, underneath four status LEDs that glow gently through the grille holes. Those lights automatically dim according to the ambient lighting in the room. On the top there are touch-sensitive controls: you can tap to play, pause, or adjust volume, or swipe to skip through tracks. Alternatively Arc will respond to the volume buttons on your TV remote. 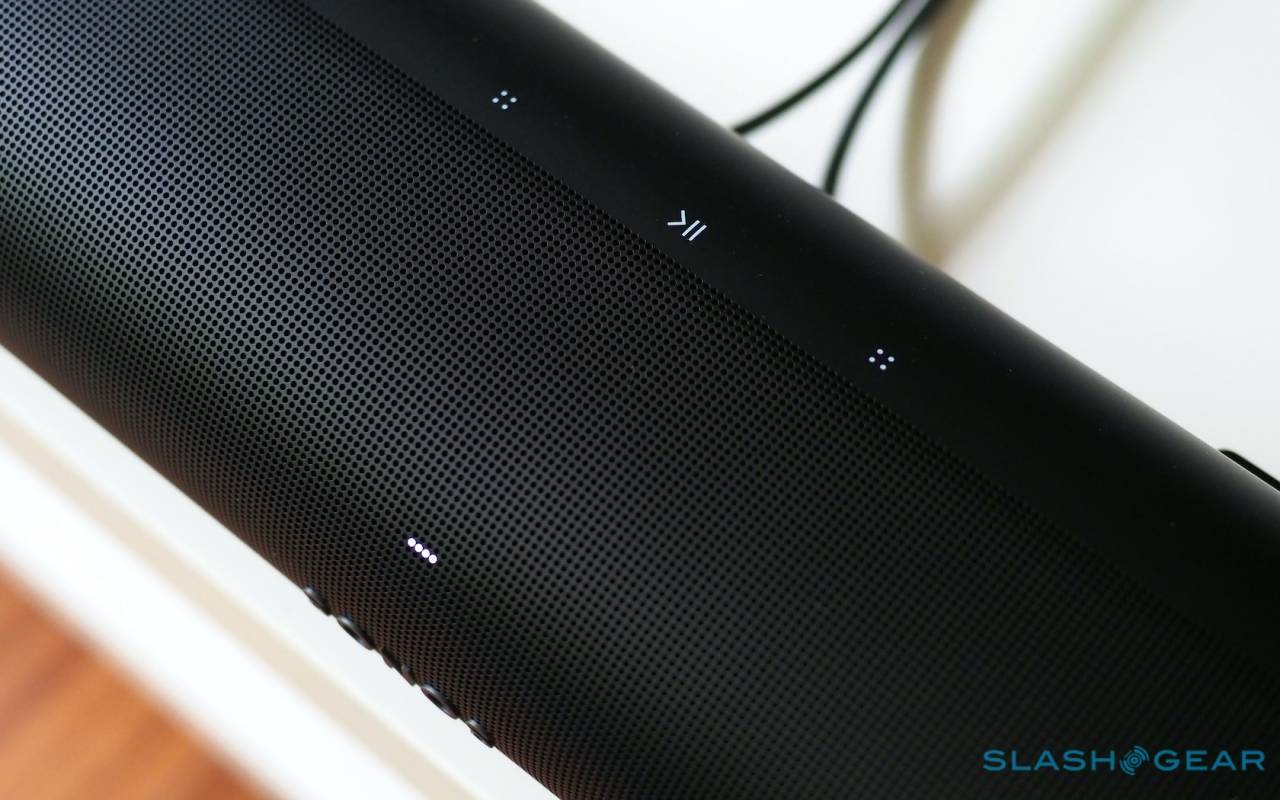 It’s significantly larger than a Sonos Beam: 45-inches in length versus 26-inches, and almost 14 pounds versus the smaller soundbar’s 6.2 pounds. Arc comes in the same matte white or black, though the shape is different; a sinuous wave, punctured with hundreds of tiny holes. In the reflected light of my Hue Sync Box controlled lights, the slightly concave end-caps give it a restrained but handsome simplicity.

Sonos uses the extra space wisely. There are eight woofers – elliptical in shape – and three tweeters, each with its own Class-D digital amplifier. That’s more than twice the number of drivers you get in a Beam. Both soundbars can be wall-mounted; Sonos offers a $79 bracket, Arc automatically reconfiguring itself according to how it’s positioned. 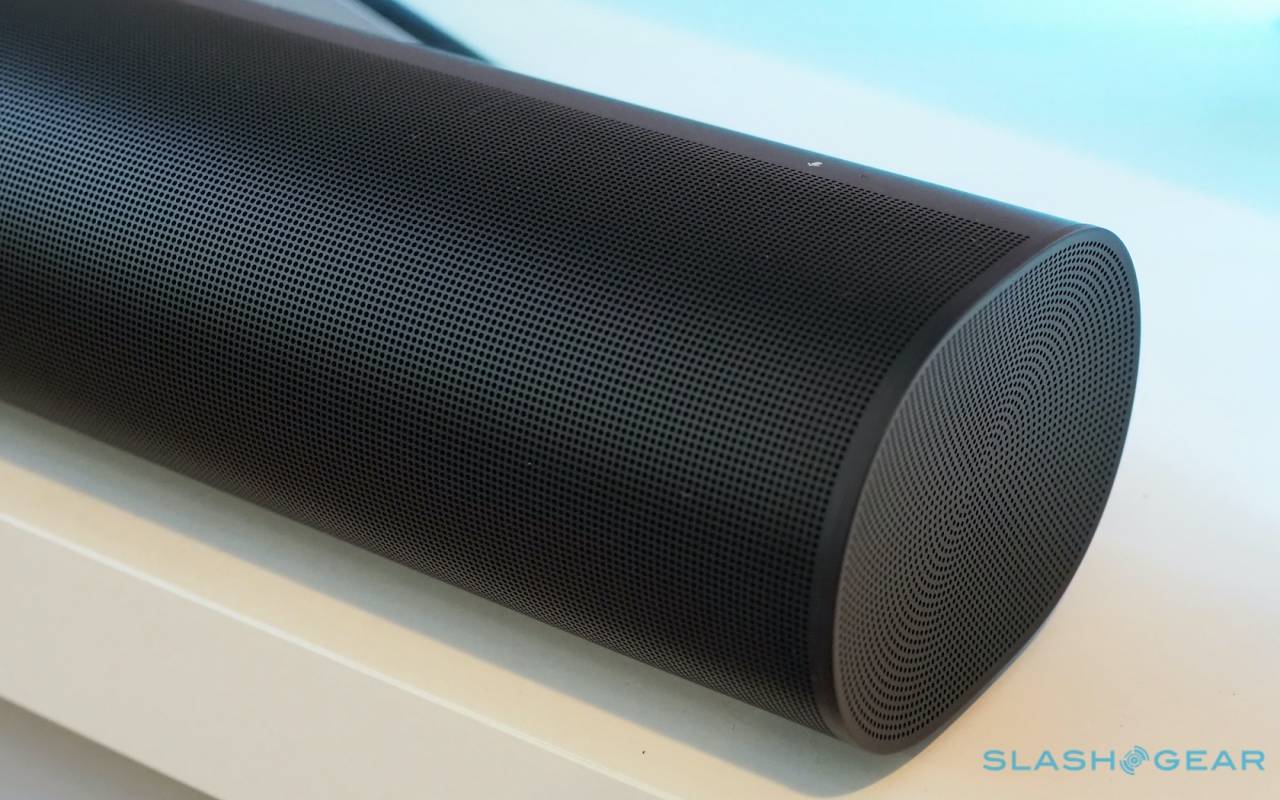 If you’re trying to decide between Arc and Beam, Sonos’ recommendation is to consider the former for TV’s over 49-inches in size. Obviously if you want Dolby Atmos then Arc should automatically be your choice, since Beam doesn’t support it.

In an ideal world you’d plug your soundbar into your TV, hit the power button, and be immersed in a hubbub of Dolby Atmos surround complete with 3D audio. The reality is, however, that getting the very best out of your A/V kit can be a head-scratcher at best, and downright infuriating at worst. That’s not all Sonos’ fault – in fact, I suspect it has made setting up Arc as easy as it rationally can – but it’s still worth noting.

You’ll get the best, easiest results if your TV has an eARC port. That’s a type of HDMI which is on the most recent TVs, and which is capable of passing through the highest-resolution audio, such as Dolby Atmos. With eARC, you’ll be able to play Dolby Atmos, TrueHD, MAT, Dolby Digital Plus, and Dolby Digital content. 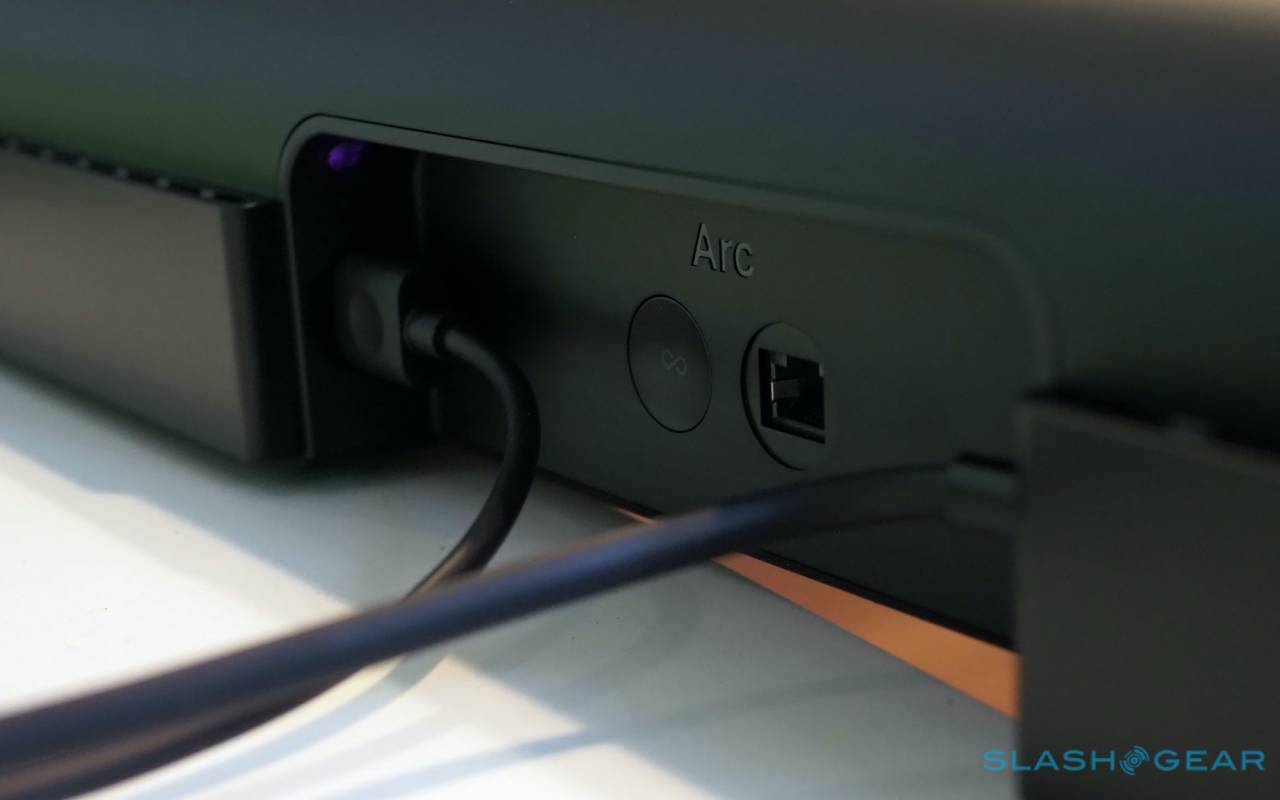 Older TVs are likely to have HDMI ARC ports, though, not eARC. The audio you get in that case is largely dependent on the TV itself; you may get Dolby Atmos, Dolby Digital Plus, and Dolby Digital, or you might just get some combination of the three. TrueHD and MAT aren’t possible with ARC.

If you don’t have either of those ports available, then there’s an optical digital adapter instead. Your TV may be able to send Dolby Digital sound to the Arc, but you won’t get any of the other formats. 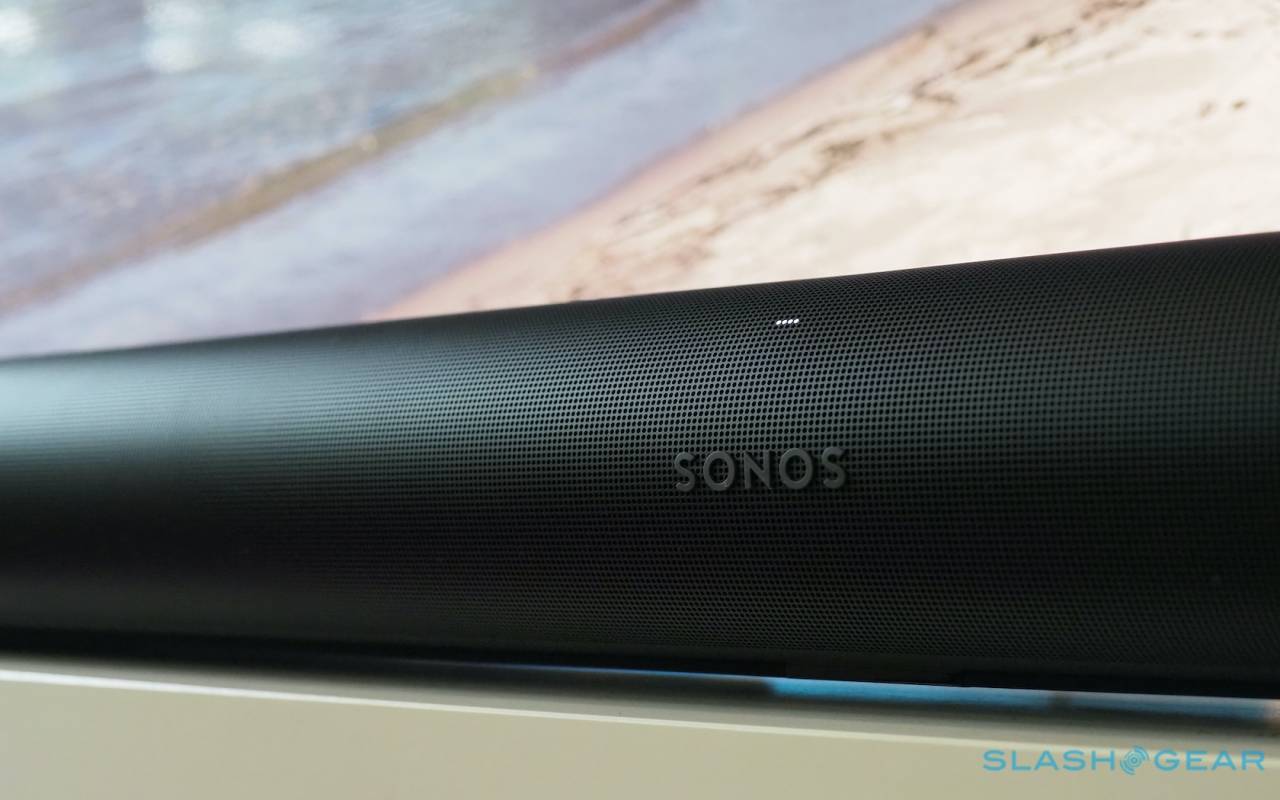 That’s all theoretical support, of course: you also need to have the right content with Dolby Atmos audio. It could be a Blu-ray and an Atmos-compatible player, or one of a handful of streaming devices. The latest Apple TV 4K supports Atmos, as do select Amazon Fire TV models, and the NVIDIA Shield TV. 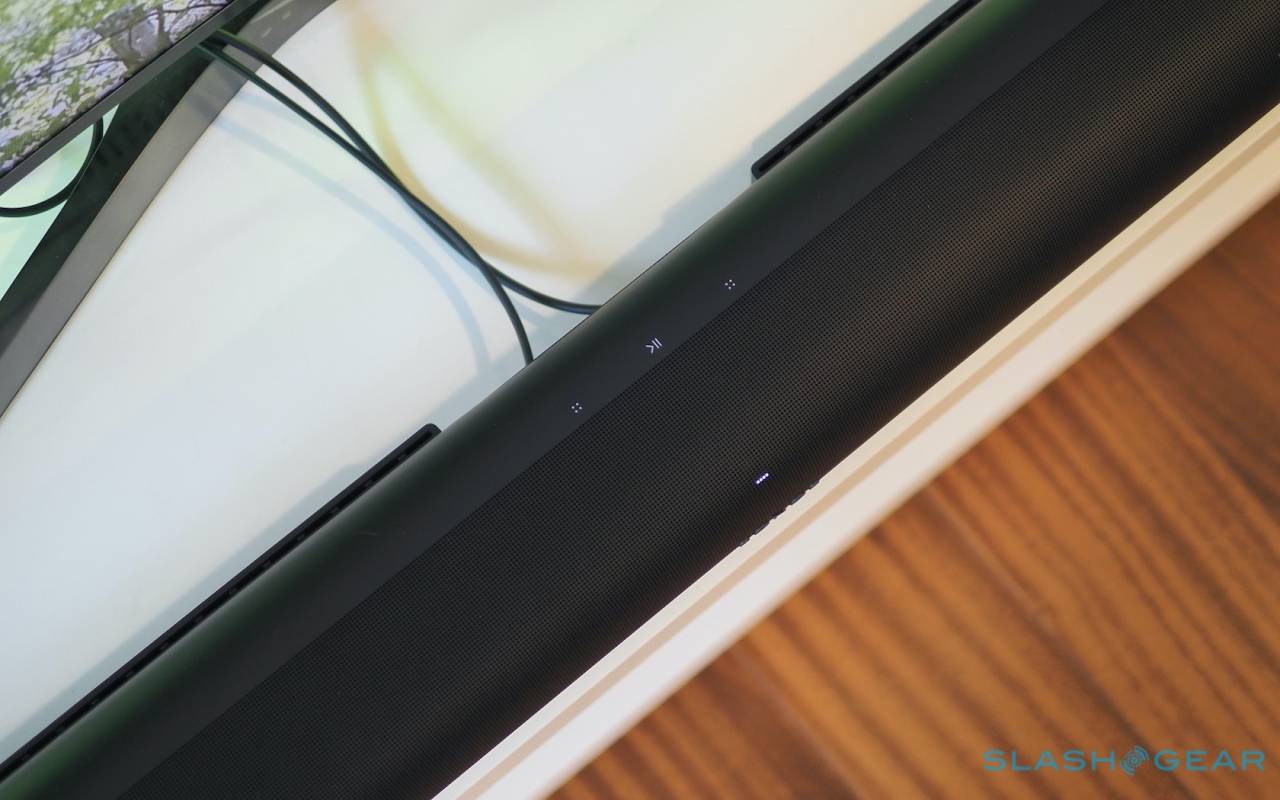 I know it may seem like I’m belaboring the point, but it’s something I suspect soundbar owners – whether Arc or something else – will encounter as more and more models promise Dolby Atmos functionality. The saving grace is that, even if you don’t have Atmos, there’s far broader support for other versions of surround sound. Getting that working with your TV is something the Sonos app walks you through, after getting Arc onto your speaker network.

You may need to dip into the TV’s settings to turn off its speakers or tweak other settings, but that proved straightforward. After that, the app guides you through Trueplay tuning, which takes into account the way audio reflects off your walls and furniture. New with Arc, Trueplay now accounts for vertical differences in the room, too. 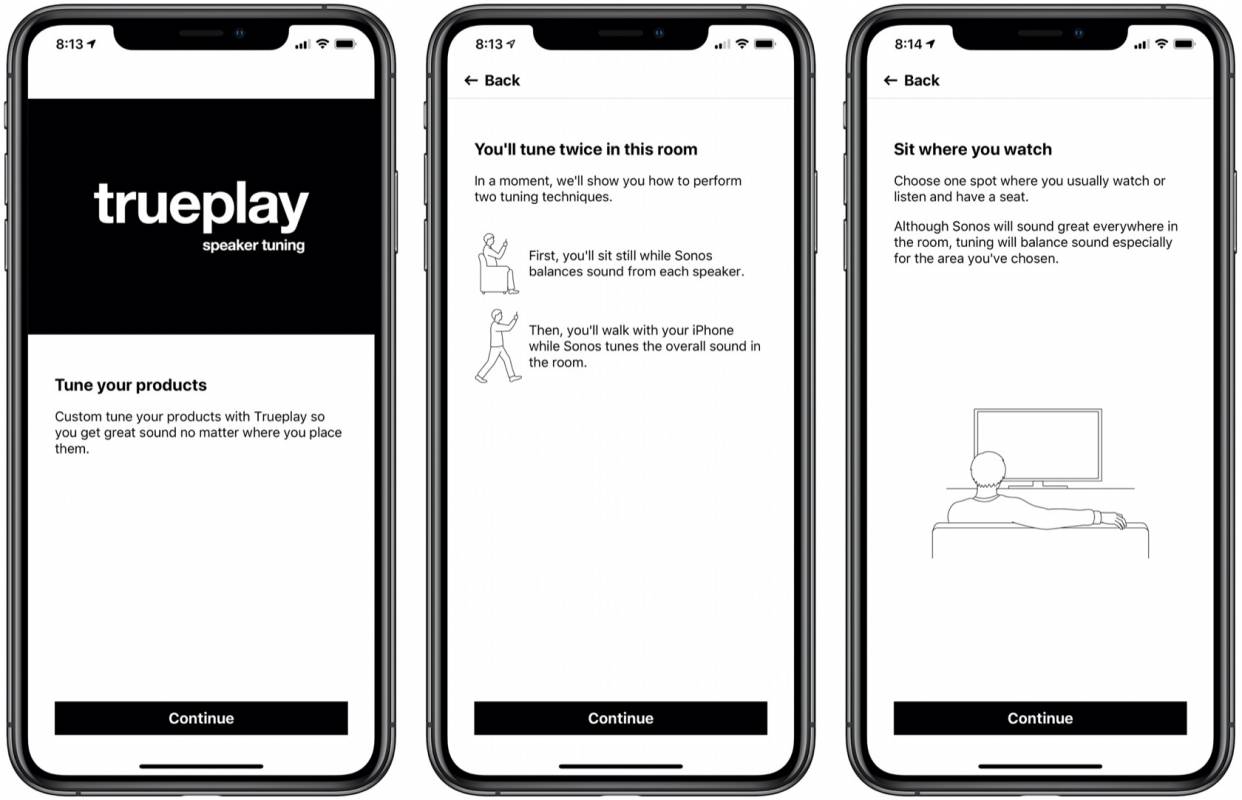 As with prior Sonos soundbars, there’s the option to wirelessly connect a pair of speakers to use for the rear left and right channels. You can use most of the models in Sonos’ range – or indeed the IKEA Symfonisk speakers – they just both have to be the same type, and running the S2 OS. There’s no option to add wireless ceiling speakers specifically with Dolby Atmos in mind, but you can add a wireless Sonos Sub for more low-end.

Arc changes how it uses its own drivers, depending on that configuration. If you’re using it with a Sub, for example, Arc retunes to deliver more in the mid- and high-end, since the subwoofer is taking care of the bass.

If you can get it all to work, Dolby Atmos can be transformational. Arc weighs in here with typical Sonos confidence: you really do believe that sounds are coming from overhead because, well, they actually are. It’s even a little disconcerting initially, as the soundtrack shifts around you. I didn’t use a separate Sub, but it wasn’t really needed: there’s bass-aplenty. 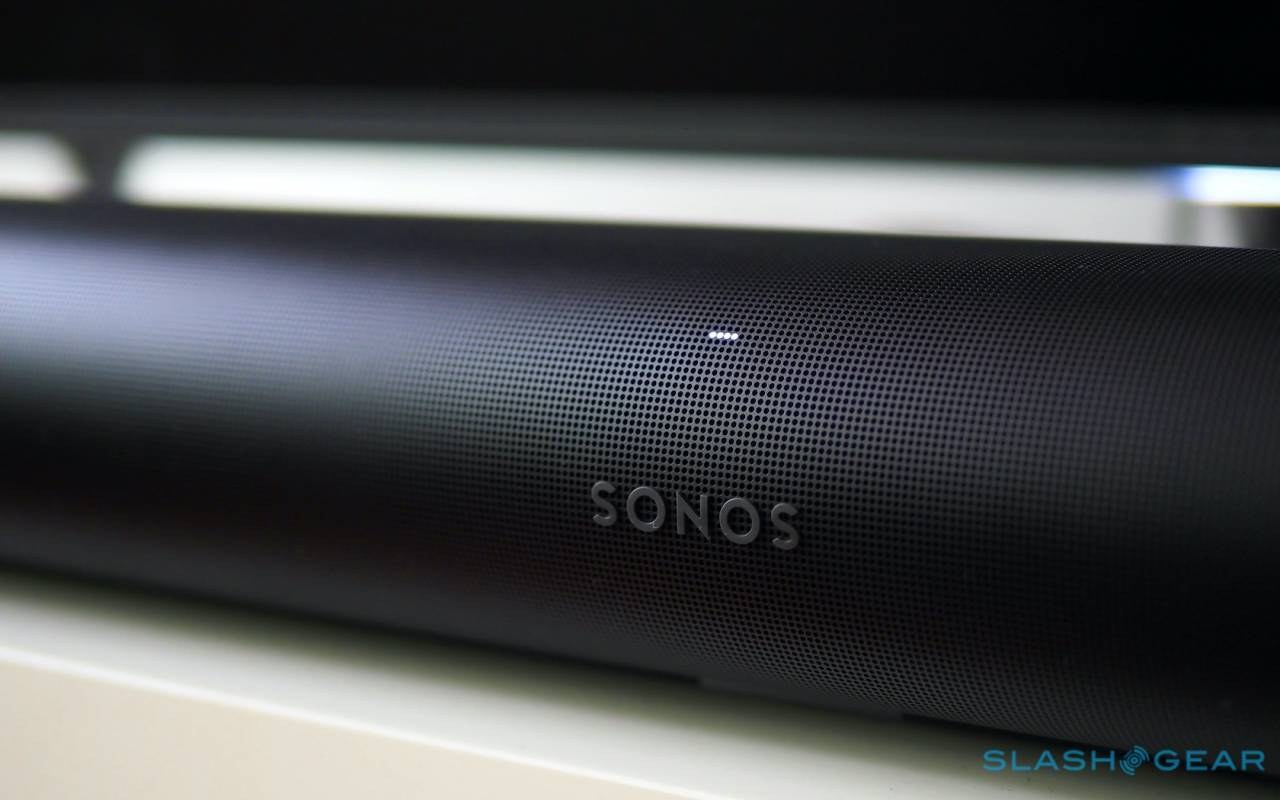 It’s worth noting that the effectiveness of the overhead audio will depend on the room you’re in, and specifically the height of your ceilings. Since Arc’s upward-firing drivers rely on bouncing sound off the ceiling, taller rooms will lessen the impact. Still, in a room with fairly typical dimensions, the effect was impressive.

Even if the stars don’t align, and Dolby Atmos isn’t on the agenda, that’s not to say Arc underwhelms. On its own, without rear speakers connected, what stands out is its versatility. There’s a clarity and cleanness to speech which doesn’t demand excessive volume; Sonos also has an optional speech enhancement setting, which further lifts voices out of the mix. It works particularly well with the night sound mode, which tamps down on the more thunderous parts of the soundtrack to avoid waking the house up. 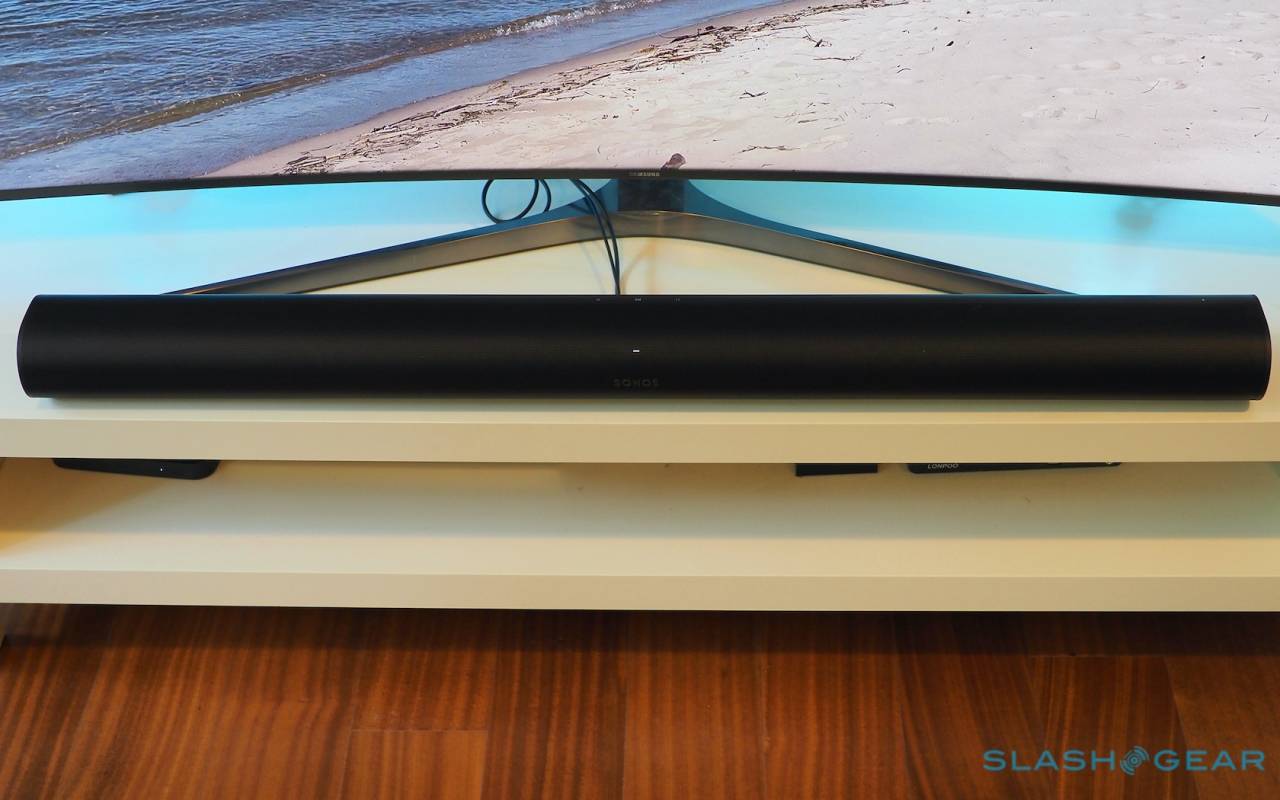 As things get louder, though, Arc doesn’t get left behind. Tempest levels of bass still don’t overwhelm the mid-range, and the extra width of the soundbar over the Sonos Beam makes for a broader soundstage, too. It outperforms the Playbar I typically use with my primary TV as well. You can tweak the bass, treble, and loudness manually if you prefer, but honestly Trueplay does a better job of that (and has more granular control over the EQ too).

Add in some rear channel speakers – I used a pair of Sonos SL, each $179 – and things get even better. Atmos support is all well and good, but content with earlier versions of surround sound is far more available, and only slightly less impressive. On its own, Arc’s surround sound performance is broader than stereo but not likely to convince you that audio is actually coming from behind you. More immersive, yes, but I suspect every Arc buyer will want to add some dedicated rear speakers for the full effect.

Arc doesn’t just work as a soundbar for TV, of course; it’s also a full Sonos speaker for music. As you might expect, as basically the largest model in the range, it outperforms all of Sonos’ standalone music speakers. I didn’t have a second Play:5 (now renamed Sonos Five) to connect as a stereo pair and contrast, but I suspect Arc would hold its own there, too. 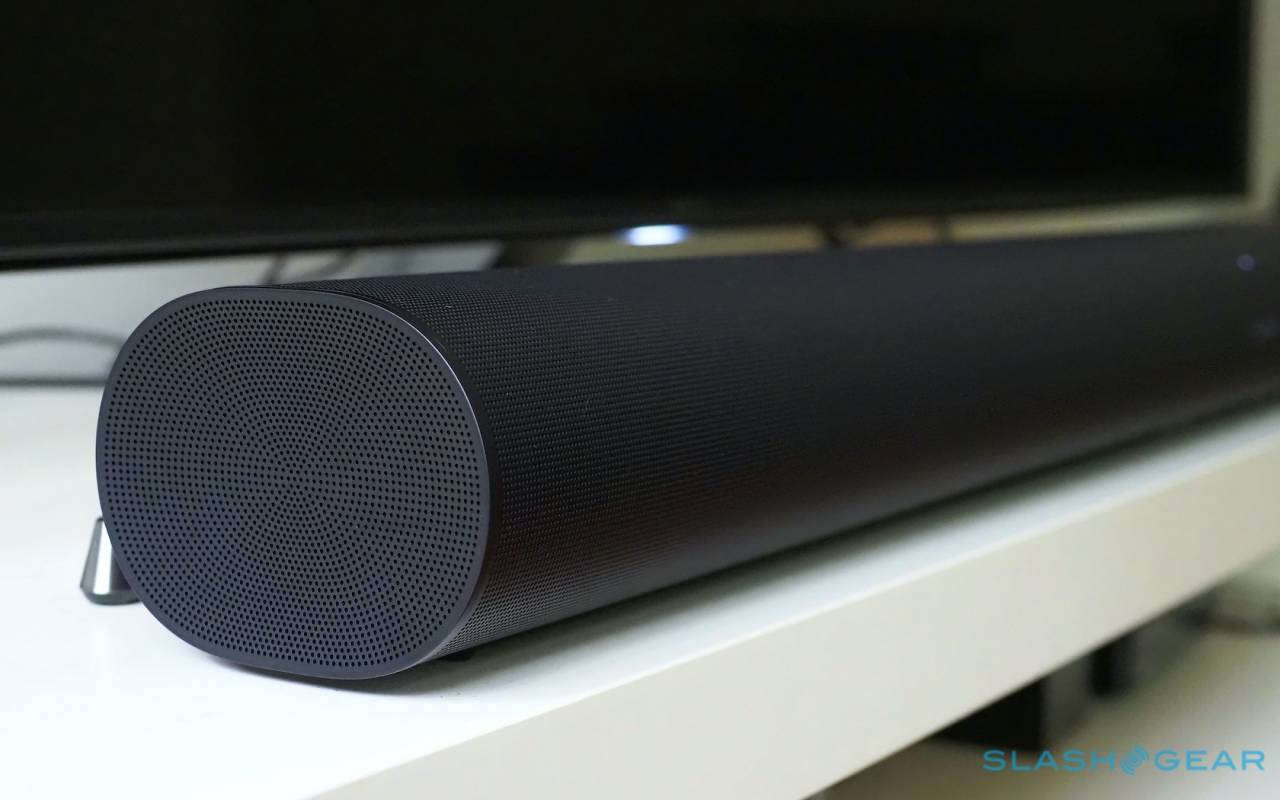 Again, the same balance that makes it so rewarding as a TV and movie speaker hold up for music. The advantage of a pair of Five speakers would be even greater stereo separation, but then you’re also looking at just shy of $1,000 for the two.

For streaming music, you can log into your usual accounts for Spotify, Tidal, and others via the Sonos app. Or, you can use AirPlay 2 from an Apple device. Unlike the Sonos Move, though, there’s no Bluetooth.

Alexa and the Google Assistant are optional

Using Arc as a smart speaker is optional. If you want to, you can enable either Amazon Alexa or the Google Assistant, and summon them by voice with their respective keywords from across the room. Alternatively, you can just ignore that altogether and not sign in with either service. 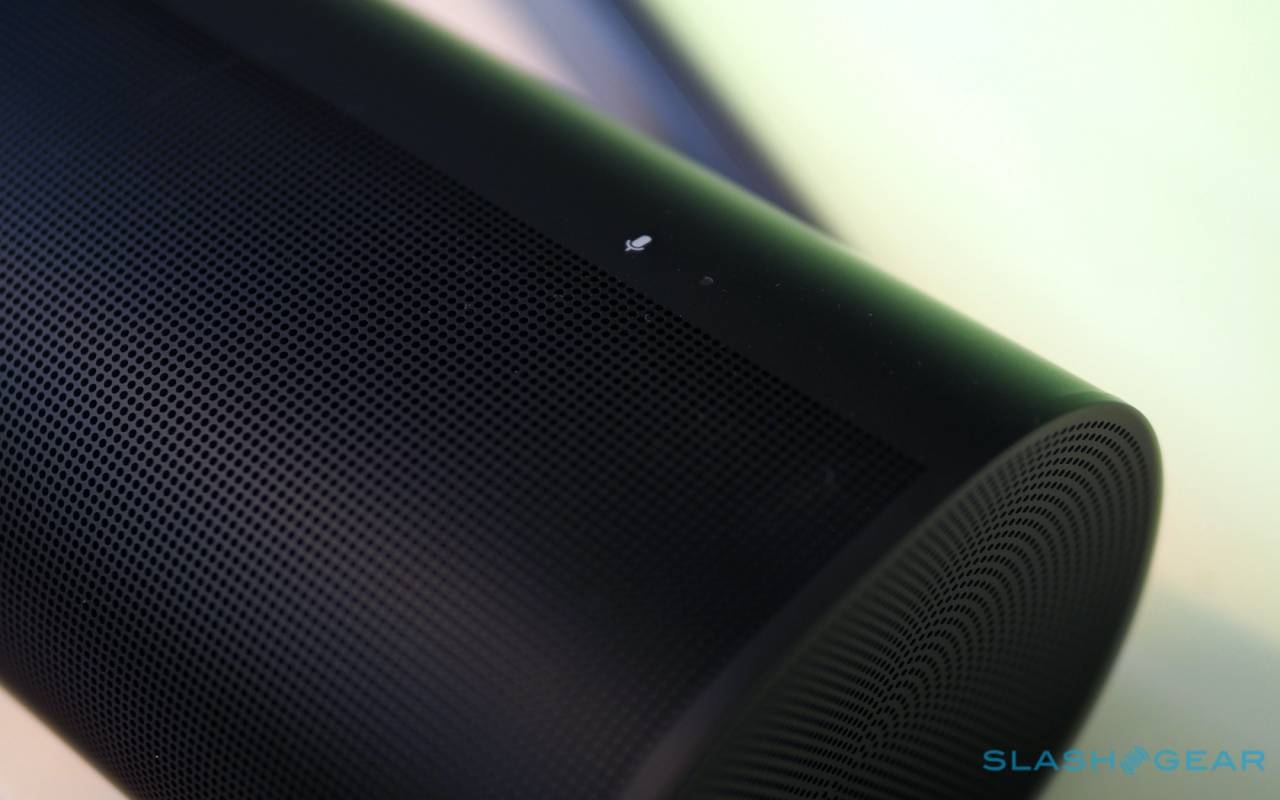 Sonos includes a button to mute the microphone, for those times when you might not want to be heard. I had no problems getting Sonos’ four microphones to pick up my commands.

As with so many Sonos products before it, part of Arc’s charm is its convenience. One speaker, one power cable, one HDMI cable – all three of which are in the box – and in theory you’re up and running. Any subsequent frustration comes from the nature of the Dolby Atmos ecosystem right now, where device and streaming platform incompatibilities abound. 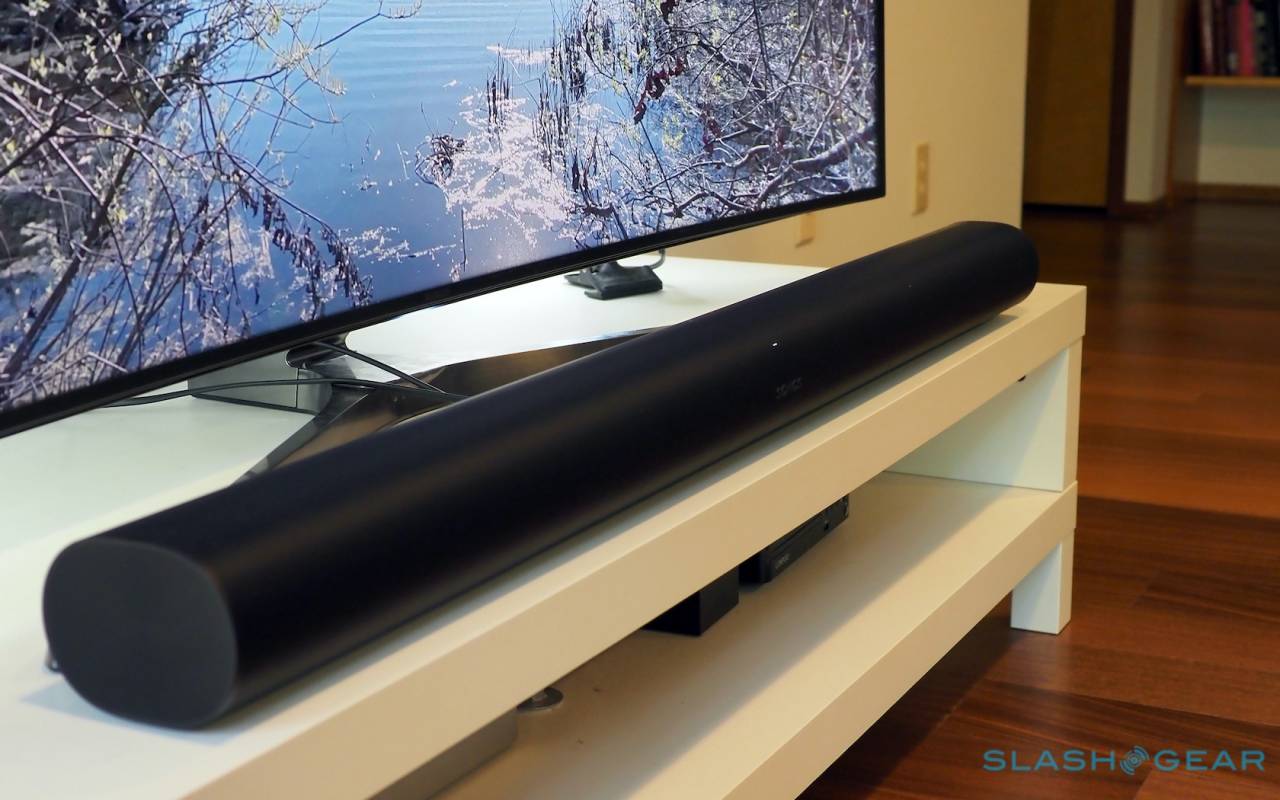 Even if you get it all working, you’ll find Atmos content is fairly limited in availability. I discovered I was much happier when I stopped wondering what exact sort of surround audio I was getting and instead just leaned into Arc more generally. Sonos’ soundbar takes what was so pleasing about Beam and cranks up the volume and clarity. Dolby Digital 5.1 content sounds great, music too, and it’s all wrapped up in that ease of use that the company is notorious for.

Eventually, the Dolby Atmos landscape will settle down. More content; less-confusing ways to access it. While that’s happening, though, the Sonos Arc blends drama and design to earn its spot in your living room. Just remember to budget for those rear channel speakers too: your ears deserve it.