Apple has shifted some assembly of its new 2012 iMac to the US from China, a teardown of the updated all-in-one computer has revealed, though the extent to which US labor and expertise have been relied upon is unclear. The new OS X machine torn down by iFixit bears the legend “Assembled in USA” where usually you’d expect to see “Assembled in China” on other Apple hardware, though while the Mac may have been pieced together closer to home, the chances of repairing it yourself have decreased dramatically.

For instance, the optically laminated display – which eliminates the air gap between LCD and cover glass, and makes for a slimmer panel, better-quality graphics, and a reduction in reflections – will make it particularly difficult to replace individual components in the screen section. If the cover glass breaks, for instance, you’ll need to replace the LCD too, even if it’s still working fine. Interestingly, Apple apparently uses the same LCD panel itself as on the last-gen iMac; the only difference is the optical lamination bonding system.

A shift from 3.5-inch to 2.5-inch hard-drives helps shave away bulk (and Apple has sensibly clad the drive in rubber, so as to help prevent vibrations), as does replacing the multiple small fans of the previous-gen with a single, large fan. That sucks in air through the squared-off vents along the bottom edge of the iMac, and blows it out of the back vents hidden by the stand mechanism. 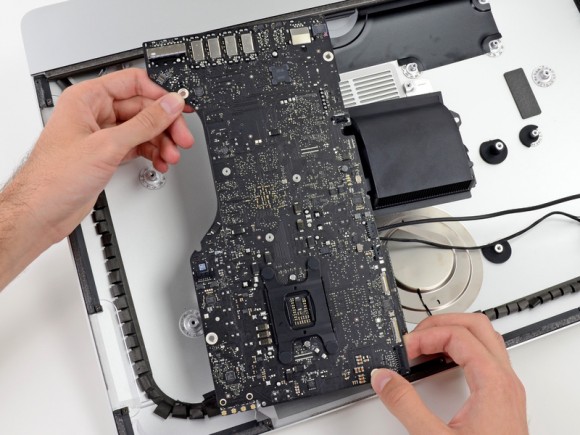 Unfortunately, while the 27-inch iMac has user-accessible RAM, the 21.5-inch model hides it behind the logic board, and while you could remove the original chips you’d need to unglue the screen first. There’s also, unsurprisingly, no room for a second drive: even the Fusion Drive models, which pair traditional spinning HDDs with flash storage, use a small flash memory chip rather than an actual second SSD.

It’s not all bad repair news, however. The dual-microphones and webcam are now attached with sturdy – and removable – cables, making swapping them out more straightforward, while the antennas for Bluetooth and WiFi are also modular. Overall, though, iFixit rates the 2012 iMac 3 out of 10 for repairability, citing the troublesome upgrade process and replace-unfriendly components like the display sandwich. 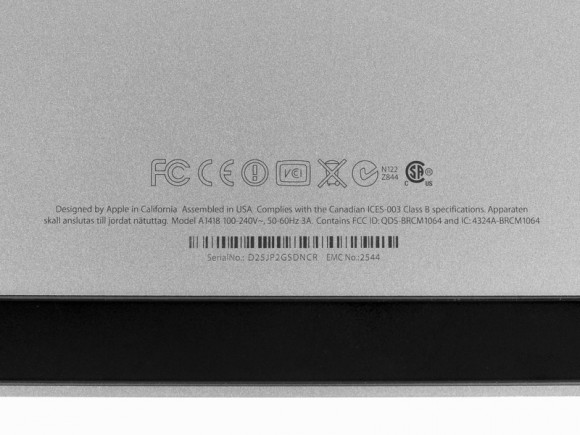 But, how many of those components come from the US? According to the FTC, “Assembled in USA” is a so-called “qualified Made in USA” claim, where it’s considered deceptive to suggest that a product has been made within the country as a significant amount of the work that went into it was done overseas.

“A product that includes foreign components may be called “Assembled in USA” without qualification when its principal assembly takes place in the U.S. and the assembly is substantial. For the “assembly” claim to be valid, the product’s last “substantial transformation” also should have occurred in the U.S. That’s why a “screwdriver” assembly in the U.S. of foreign components into a final product at the end of the manufacturing process doesn’t usually qualify for the “Assembled in USA” claim” FTC

Since it is insufficient to simply piece together overseas-produced components and meet the standard, Apple must be doing more in the assembly process to justify its claim. Previously, only made-to-order Macs bore the “Assembled in USA” branding, but the iFixit machine was an off-the-shelf model of the standard base configuration.

More on the new iMac in our hands-on with the 27-incher.