Small Sonos: Is multi-room music overkill in a tiny apartment?

I’d always ignored Sonos. Not in the sense that I didn’t appreciate the clever mesh networking, or like the idea of controlling multiple streaming speakers from a single device, but because I assumed you’d really need to be living somewhere spacious to make the most of it. Since I’m squeezed into a central London flat that could (generously) be described as bijou or – if you don’t speak real-estate agent language – just plain tiny, splashing out on Sonos seemed like a waste of money.

If you’ve been living under a rock for the past few years, Sonos is a multi-room streaming system that aims to make distributed audio just about as easy as plug-and-play. The company started out with boxes that hooked up to existing amplifiers and speakers, all linked together with a preconfigured “Sonos Net” wireless network, and then expanded into all-in-one speaker boxes that

Sonos’ two key products now are the PLAY:3 and the PLAY:5, integrating wireless, amplifiers and speakers into single boxes. The key difference between the two is the number of speakers and the amplification on offer: the PLAY:3 ($299/£259) has three amps powering a tweeter and two mid-range drivers, while the PLAY:5 ($399/£349) steps up to five amps pushing two tweeters, two mid-range drivers and a 3.5-inch woofer. Both can be used individually or, if you want to double up, can be wirelessly linked together to take each side of the stereo pair.

When I mentioned to a few others in the industry that I was having pangs of Sonos lust, I was surprised at how quickly jaded people became enthusiastic. In fact, so enthusiastic that it wasn’t long before I had three PLAY:3 boxes in my living room. (I went for the smaller model out of deference for the size of the rooms, my neighbors, and my wallet.) 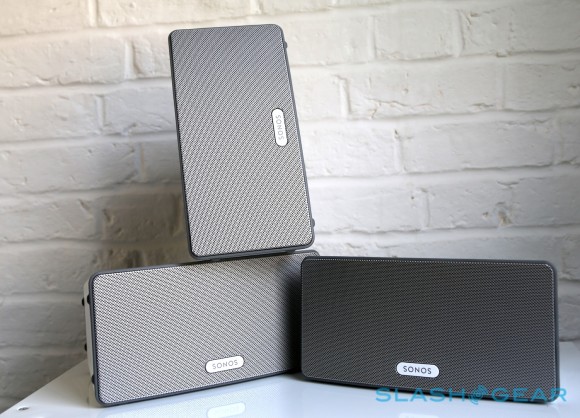 Setup was, as promised, ridiculously straightforward. I bypassed the bundled CD (because my laptop doesn’t have an optical drive) and grabbed the Sonos Mac controller app direct from the site; that walks you through the few steps of pairing the units together. It would’ve gone quicker – or involved less of me racing around the flat – if I’d paired them before placing them in the rooms I intended to keep them in (since you have to click search in the app and then hit two of the three buttons on the speaker itself within sixty seconds), but I used the opportunity to practice some of the free-form dance I intended to do once the music started.

After that it was a case of loading the free Sonos controller apps on every Android and iOS device that I could find lying around, and logging into Spotify. You’ll need a premium subscription to use the streaming music service with Sonos, but given the awful state of ID3 tagging on my patchy MP3 collection, it was worth it. Plenty has been written about Sonos’ ease of use, so suffice to say I was grouping speakers for whole-apartment playback, queuing up impromptu playlists, and throwing shapes in record time.

Was it overkill for a smaller apartment? Admittedly, I’ve only had the volume control up to halfway at most – I can’t fault the audio quality, and the only patchy moments have been down to low-bitrate source files – but I’ve found I’m listening to music a lot more than I was before. Even when I had speakers to hand that I could plug my laptop into, I would generally forget to – or decide not to bother – hooking them up. And there’s something magical about being able to walk from room to room and have the audio playback “following” you.

It’s not perfect, mind. The PLAY:3 not only trims the number of speakers compared to the PLAY:5, but it also drops the line-in connection; that’s likely a cost saving exercise rather than a matter of space, but it’s still a frustrating omission. I’d like to see Sonos update its Bridge – a network adapter that “bridges” your regular router with the special Sonos network – to include a line-in port. 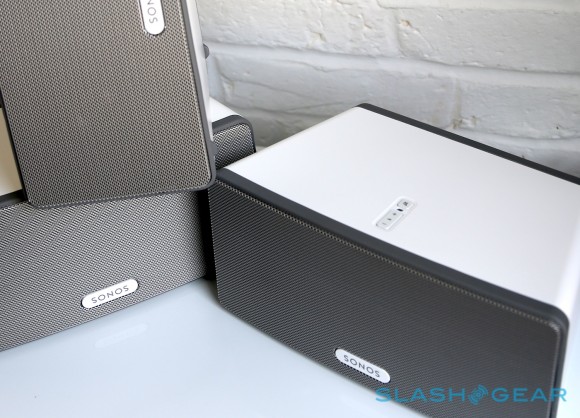 The on-device controls leave something to be desired, too. As it stands there are a mere three buttons: volume up and down, and mute. An instant-group key would be really handy, adding that speaker to whatever was currently playing. Oh, and while I had left Sonos’ dedicated Sonos Control touchscreen remote on my potential-addition list, having subsequently tried it out at a friend’s house (who has a far more comprehensive Sonos installation) I’m not convinced it adds anything more. Touchscreen responsiveness was particularly lacking, in comparison to the free Sonos app on my Galaxy S III, and navigation felt sluggish too. Even my friend said using the smartphone app was easier, and it seems Sonos agrees as it confirmed recently that it would be discontinuing the dedicated remote.

If you’re short on space and on cash, it’s certainly hard to argue with a simple set of speakers. Wired is the cheapest option, or you could throw in Bluetooth or Apple AirPlay, though in that case it starts to get somewhat closer to the price of a PLAY:3. You lose convenience, though, and the relative ease (and spousal approval factor) of a standalone system. I’ve now got an old tablet basically dedicated to Sonos control, simple enough for non-geeks to use, and with none of the “do I really want them digging around on my computer?” concerns that using my laptop as a music source might provoke.

In all, I’m kicking myself for waiting. My Spotify subscription is finally getting put to good use, and I’m rediscovering music that I used to love but which I pretty much gave up on thanks to underwhelming laptop speakers. Sonos may not be the cheapest way to get music on a bigger scale, but I can certainly say that you needn’t have the biggest home in order to get the best of it.