Siri, can you make me dump Android?

Until now I’ve been inured to the iPhone’s charms. iOS has its strengths, but – barring three months of iPhone 3G ownership – Android has always been my daily driver. My dedication to Google wavered, though, when Apple unveiled Siri on the iPhone 4S: not just voice recognition, but the promise of the first real artificial intelligence (AI) on a mobile platform. Was Siri really as good as Apple made out – and as Vincent found it to be in our iPhone 4S review – and more importantly could it wean me off Android? I grabbed a 4S to find out.

The promise, and Apple’s demo, is compelling: forget packing a bigger screen into a chunkier handset, and instead allow a personal assistant to help you manage your messages, multimedia, schedule and social life. Siri was Apple’s middle-finger gesture to the hardware arms-race that epitomizes the Android smartphone market today. Don’t just make a phone that runs 1-percent faster, make one that actually works better with users’ needs.

Sadly, the reality suggests that Apple’s beta label is deserved; my real-world experience fell well short of the hyperbole. Siri’s limitations outside of the US are undoubtedly a factor in my disappointment. Whereas US users are able to ask for suggestions on nearby restaurants and other location-based services, seeing results close to them and rated by Yelp, here in the UK (just as in Canada, Japan, Australia, France and Germany) there’s no interaction with Maps whatsoever. That’s coming sometime in 2012, Apple says. Maps and local searches are one of the most common tasks I turn to my smartphone for, though, leaving Siri feeling somewhat half-baked. 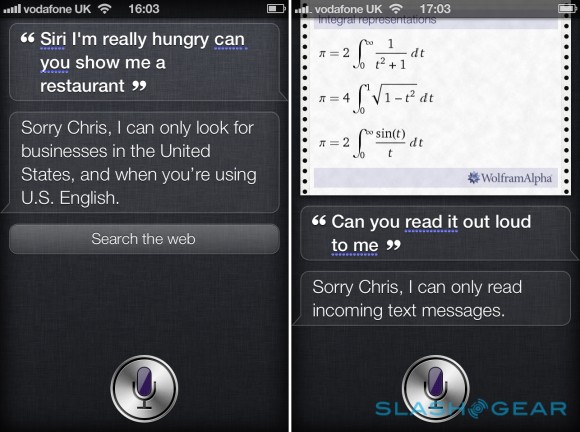 Still, the missing functionality is not the only reason I wasn’t convinced. I was left unimpressed with what Siri can still do, too. I’m not exactly a BBC newsreader, but even with just the vaguest of accents I don’t usually have issues being understood. Some of my more memorable interactions with Siri were down to odd misunderstandings, however. One command you can give is to ask Siri to call you by a certain name, and so I tried “Call me Chris.”

Part of the value proposition is that, as an AI not just a voice-recognition system, Siri can respond to natural speech rather than canned instructions. Unfortunately, I had trouble with that, too. All too often my questions – such as currency or world clock conversions – would be misunderstood, or lead to the generic “Would you like to search the web for that?”

Sometimes a web search would indeed turn up an answer, sometimes not, but I was never sure whether Siri had misunderstood me, didn’t have the functionality to respond to that particular type of question had I been understood, or if I should’ve phrased myself differently to get the right answer. The handful of suggested instructions offered when you hit the help button is useful, but falls well short of explaining everything Siri is supposed to be able to do. Instead it’s trial and error, never quite knowing if it’s your voice or Apple’s system which is leading to frustration. 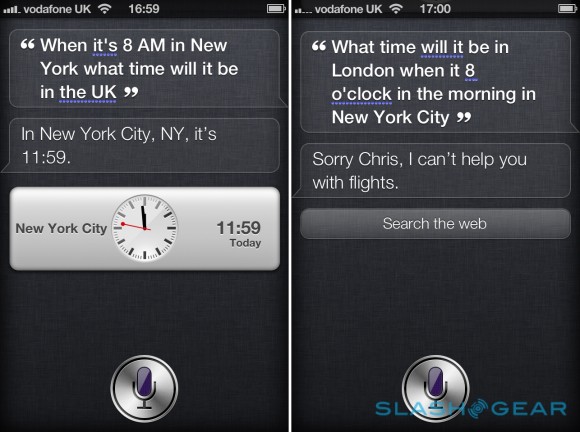 The voice recognition, Apple says, improves over time, and it’s entirely possible that as Siri grew more familiar with my speech patterns I’d have better results. There’s no indication on how long that actually takes, however, and after several days of intensive use there seemed little rhyme or reason around what would be recognized and what would be confused. One of Apple’s biggest strengths has always been consistency, and Siri seems to lack that reliability which otherwise makes the iOS experience so strong.

[aquote]If Siri took a role in my desktop, it would be a compelling reason to go with Apple for both computing and mobile[/aquote]

So, score one for Android, right? Well, not quite. Although my first impressions haven’t led to a conclusive win for iPhone, I can readily envisage a time that Siri’s appeal could see me dumping my ‘droid. iOS leaves me cool, but I use OS X every day. If Siri could jump the divide and take a role in my desktop use, that would be a compelling reason to go with Apple for both my computing and mobile needs. 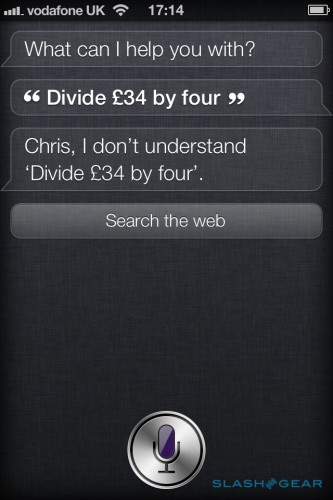 Apple already has one such closed “ecosystem” in the shape of iTunes, with media downloads and rentals, streaming and features like AirPlay. I’ve not bought into that – Spotify and on-demand streaming TV take care of most of my digital media needs – but I might buy into an iPhone being the intelligent remote control for my desktop.

We’ve already written about the technical logistics behind how that could happen: Apple is quietly upgrading its various devices to support Bluetooth 4.0, a low-power implementation that could mean a permanent, active connection between iPhone and MacBook, say, wouldn’t mean instant battery drain. When you’re at home, Siri could be another method of interacting with your Mac. Dictation, loading apps, bypassing clicks and gestures by asking your computer to do tasks instead: in short, the next usability step beyond trackpad gestures.

When you’re away from home or the office, meanwhile, Siri would be the perfect remote desktop tool. No more squinting and tapping at a tiny replica of your Mac display on the iPhone’s 3.5-inch touchscreen: instead you could simply ask Siri for key files, to begin tasks and to send over documents and other content.

Latency might be an issue along the way. Siri was generally lag-free in its current implementation, either over WiFi or on Vodafone’s 3g network, but adding in a trip across your home or office network to your Mac could well extend the delay. Still, as Apple migrates Siri out of beta and tightens up performance, that shouldn’t necessarily take any longer than a regular remote desktop setup. 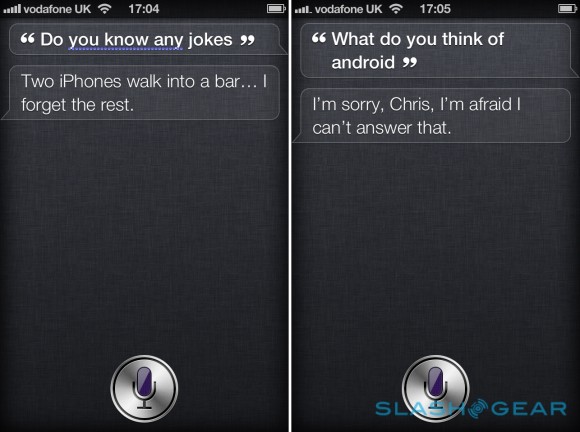 As it stands, then, the iPhone 4S – and Siri specifically – isn’t enough for me to abandon Android. Like many outside the US, I imagine, I’ll have to revisit that when Apple finally enables location-based services for international users. Still, it’s the promise of what Siri could deliver down the line that has me really curious; much is often made of Google’s combination of mobile and search, but its Chromebook experiment hasn’t had the huge impact on computing it perhaps expected. That leaves Apple leading the field for potentially integrating mobile/desktop computing – Microsoft has Windows, of course, but Windows Phone lags far behind iOS and Android for voice control systems – and, until we live fully in our browsers, it’s something Google may struggle to compete with.

If Apple can leverage that lead, it stands a huge chance of pushing iPhone to users who, like me, haven’t been caught in the iTunes multimedia snare. Siri’s comedic and tongue-in-cheek answers to offbeat questions may be what grab headlines today, in the iPhone 4S’ honeymoon period, but it’s the potential for a paradigm shift in computing usability that could have us talking to our phones tomorrow.