Shiny Pokemon GO Update: How to catch a Gold Magikarp

An update to news of the Pokemon GO Water Event this week suggests that this may be the one and only time a Shiny Magikarp appears. That’s according to our anonymous source with information on the subject – who also mentions that this decision has yet to be finalized. It could just as easily be that this Pokemon GO Water Event is just the beginning of something very awesome – Shiny Pokemon GO monsters across the whole planet – we’ll see soon enough! But for now, how do we go about finding a Shiny Magikarp?

1. Grind them up, cook them into chili

There’s one way to be certain of a Magikarp being Shiny – and it’s not by general appearances. While eventually we’d hope that every Shiny Pokemon would appear as such – plainly – for all players, here at the start of the Shiny era there’s some room for mistakes. Namely color mistakes – sometimes a Shiny Magikarp can look just like a normal Magikarp.

This is happening because not all users have updated their apps – old cached images and color schemes appear as they have in the past, even on a Shiny Pokemon. To be sure of a Shiny, users should do several things, starting with updating their apps. This process is easy now that the official latest edition of Pokemon GO is available in all app stores.

* Gold, Light-orange, yellowish – it really depends on how your display and your eyes interpret the color scheme for this particular Shiny Pokemon. Others are far more definite – like Shiny Gyarados. Instead of a deep blue, Shiny Gyarados is a rich, heavy red. There’s no mistaking one for the other, of that you can be sure. 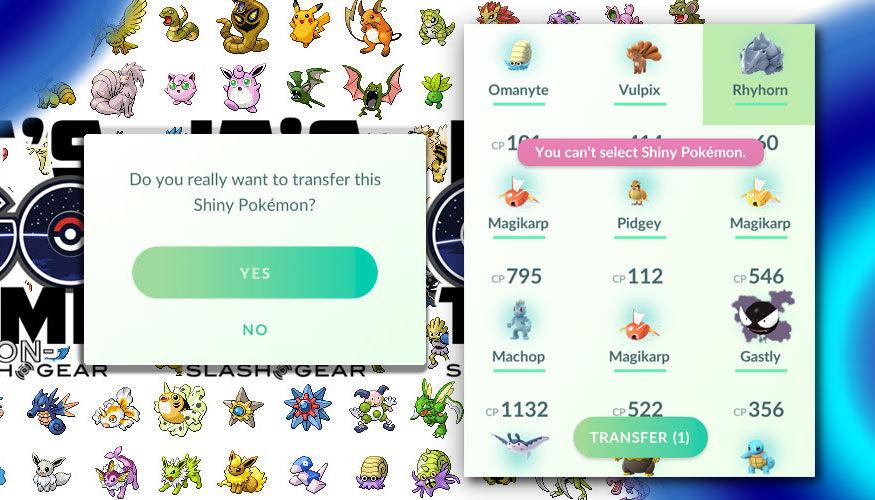 † Transferring each Magikarp individually allows the game to tell users whether or not the monster is Shiny. After the standard “Are you sure you want to transfer this Pokemon” alert, there’ll be another alert. That second alert tells the user whether or not they have a Shiny Magikarp.

†† Transferring multiple Pokemon at once will also tell the user whether or not they have a Shiny Magikarp. In fact multi-selecting Pokemon will show this – an alert will block the user from selecting the Shiny Pokemon. This is the same sort of alert that blocks players from multi-selecting a Favorite Pokemon.

During this Water Event, Magikarp will be able to spawn almost anywhere on this planet, in any Biome. When the event is over, Magikarp will return to the seas, rivers, lakes, and streams. Users should use this opportunity to capture as many Magikarp as they possibly can – with or without the prospect of a Shiny Pokemon – as Gyarados is a mightily awesome Pokemon to have and to battle with, at any rate.

The Pokemon Event at hand is a worldwide Water Festival, according to Niantic. This means that Water-Type Pokemon will spawn all over the place, at far higher rates than they normally would. Additionally, Water Biomes (like the ocean, rivers, lakes, and streams) currently have a greater chance of spawning Gen 2 (Johto) Pokemon.

Adding a Lure to a Pokestop will draw in water type Pokemon – including Magikarp, and huge monsters like Lapras. It currently does not matter which Biome the Pokestop is in, it’ll draw in the water types at a far greater rate than normal. Users in low spawn areas that have a Pokestop nearby – now’s the time to Lure.

3. Rarity of the Shiny, Perfect Magikarp

SEE TOO: Shiny Pokemon in Pokemon GO: All the details

And if we want to go one step further and find the odds of a perfect moveset for that evolved Gyarados, the odds are more intense still. There’s a 1 in 6 chance that the user gets a perfect moveset when evolving Magikarp into Gyarados. General consensus at the moment is that the perfect Gyarados moveset is Dragon Tail and Hydro Pump.

Has anyone caught one of these Perfect, absolutely perfect amazing and awesome Gyarados yet? Apparently yes – have a peek at this monstrous beast. This comes from Reddit user SuperSaiyan517. Good luck in finding one of these!

For those of you out there looking for future projections on what’s coming next in the event following this one, have a peek at our feed. Down the bunnelby hole we go with our @TeamPokemonGO Pokemon GO Twitter feed – have at it!