The most friendly Pokemon GO weekend event of all begins today. This is what’s called the Pokemon GO “Special Friendship Weekend.” During this event, we’re going to ramp up right into the event in which we’ll gain access to the most awesome Shiny Pokemon that’s ever rocked a Pokemon Gym. That is the RHYDON family, here at last, in yellow, with a special attack that’ll be exclusive to this event!

During Special Friendship Weekend, users will get 2x trade candy, 1/2 trade stardust cost, and the ability to carry up to 20 gifts at once! If you’re all about opening gifts as fast as possible, you’ll be able to rack up a whopping 40 gifts daily (twice as much as normal) during this entire weekend event!

SEE TOO: Tracking Shiny Pokemon GO in 2019 to see who is next!

Special Friendship Weekend also includes an increased rate of Friendship Level bonus. We’ve yet to confirm the specific percentage of increase – we shall see!

This weekend also includes February Community Day. That takes place on Saturday, February 22, 2020, from 11 AM local time to 2PM local time. During this time, Rhydon will be out in the wild with an exclusive attack called Rock Wrecker. This will also be the first time that the Rhydon family will be available in Pokemon GO as a Shiny Pokemon. 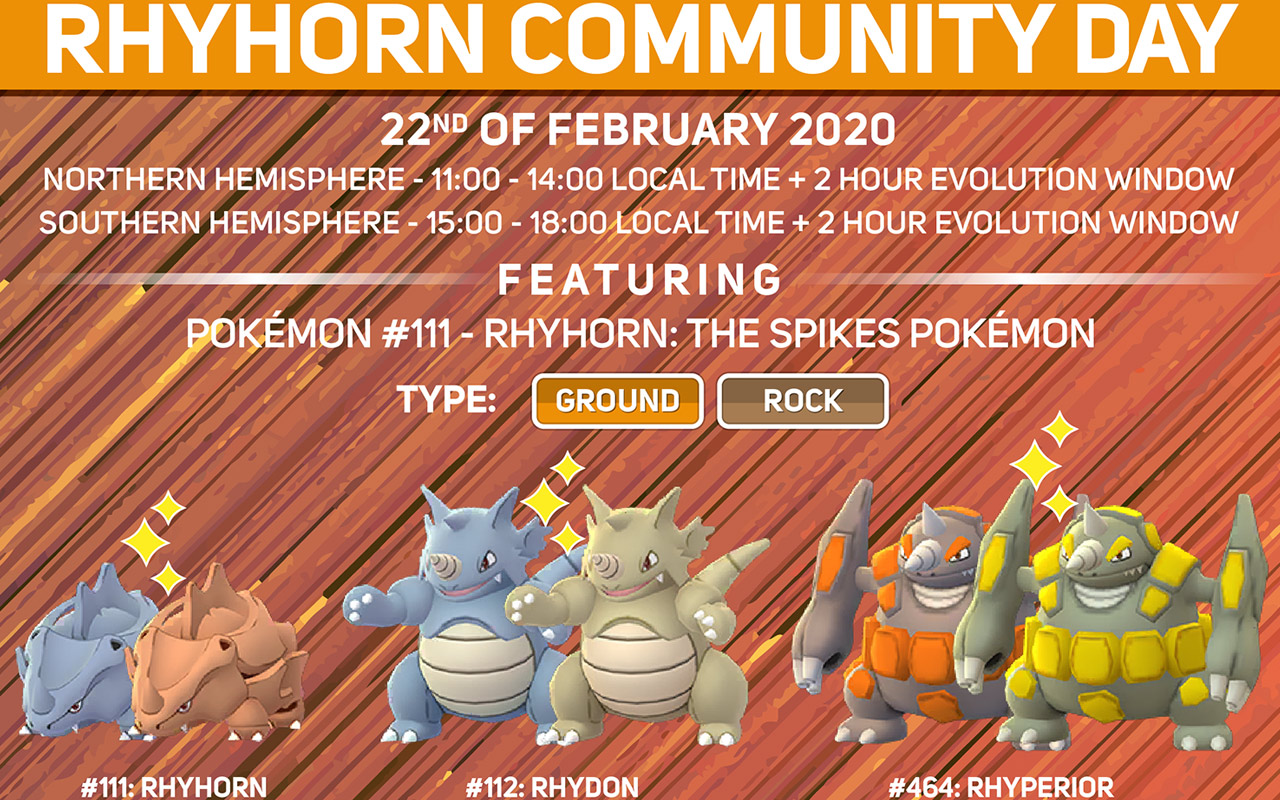 So we’ve got Shiny Rhyhorn, which evolves into Shiny Rhydon and eventually into Shiny Rhyperior. As you’ll see in the chart below, this Pokemon has the unique ability to learn the move called ROCK WRECKER! This move can appear on both regular and Shiny Rhyperior when a Rhyhorn, Rhydon, or Rhyperior is caught during this event. 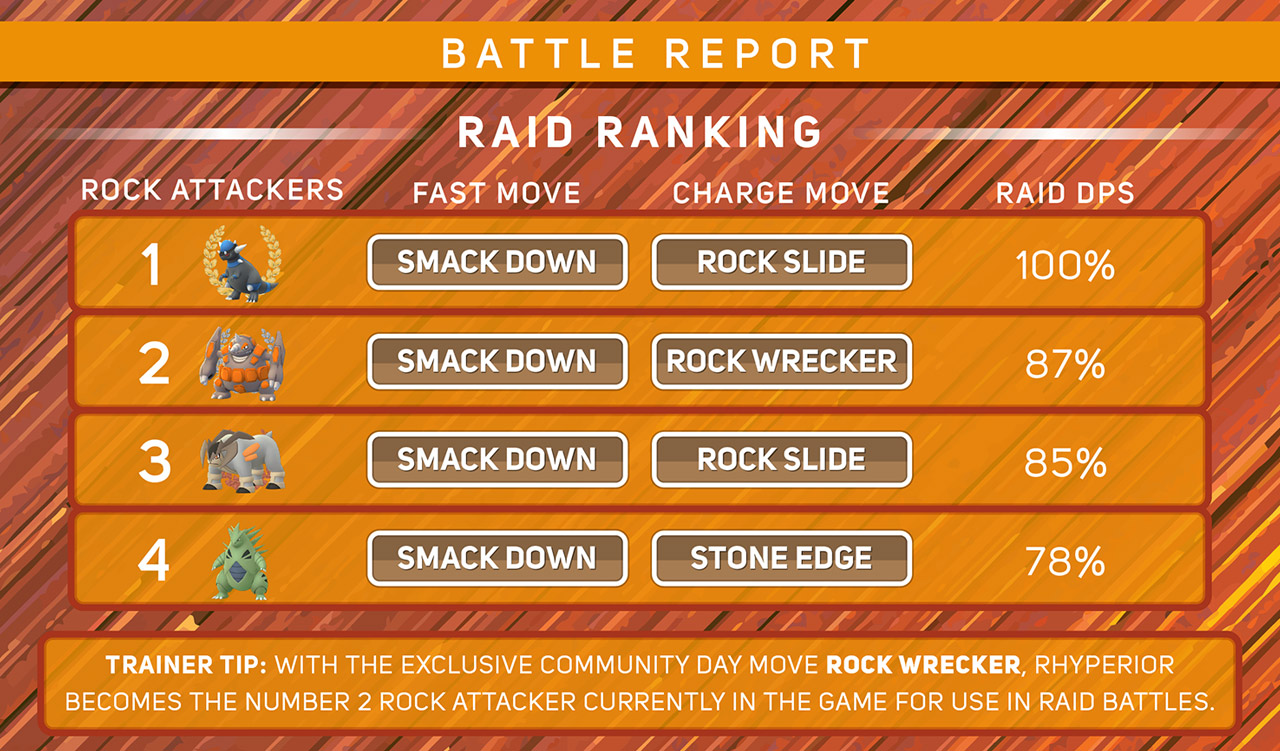 NOTE: Above and below (in orange) you’ll see a graphics created by user AzureSolarStorm, with info analysis by user GTRBRAD, using data from PokeBattler and PVPoke! These graphics were originally posted to The Silph Road on Reddit! If you’ve not yet visited The Silph Road and play Pokemon GO regularly, you’re missing out! They’ve got one of the most amazing grassroots networks for any game in the entire world – not just Pokemon GO. They’re worth a peek! 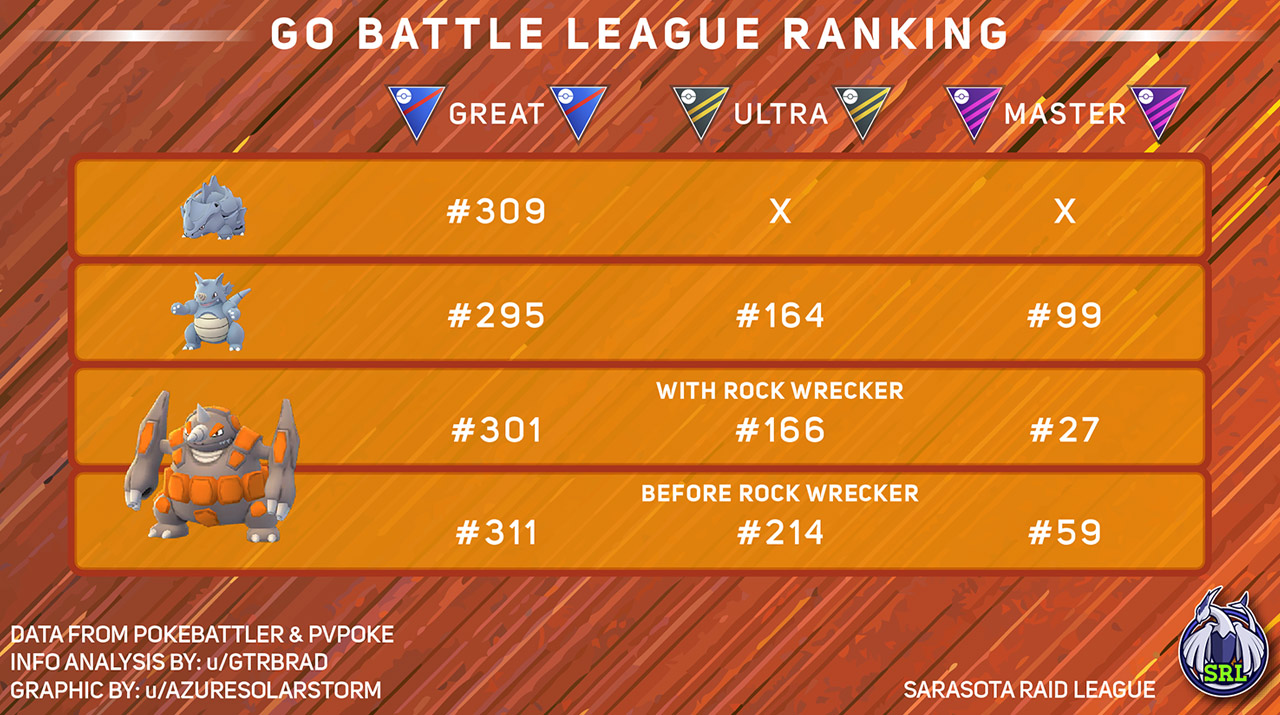 You’ll notice a marker in the corner there in the image above that reads Sarasota Raid League. That’s a local group of Pokemon GO trainers that communicate and team up for Pokemon GO in their city – real life Pokemon party in full effect! Are you part of a league in your city? Let us know what you’re up to on TeamPokemonGO on Twitter or Pokemon GO Central on Facebook right this minute!