Shazam gets into the augmented reality game with liquor

Shazam is perhaps best known for being able to recognize and name that tune just by listening to it. Two years ago, it ventured into a new kind of recognition, recognizing objects, particularly QR codes, using a smartphone camera. Now it is embarking on the next leg of that journey, entering augmented reality territory. Interestingly, its first customer for its new AR platform is Beam Suntory, not a music company, but “the world’s third largest premium spirits company”.

Don’t get any wild ideas, this is no HoloLens. Shazam’s AR platform is the same, old AR system used on smartphones for years. You point your phone’s camera at special markers and out pops some visual, sometimes animated, sometimes interactive, visible only on the smartphone’s screen. This kind of AR is mostly used for advertising purposes rather than any practical utility and that’s pretty much what Shazam is getting into here.

While Shazam did dip its fingers in the visual image recognition cookie jar back in 2015, it didn’t develop the code-scanning technology itself. It credits mobile AR specialists Zappar for that. Coincidentally, Zappar is also the company behind the successful ZapBox Kickstarter that promised to bring a HoloLens-like experience on the cheap.

Shazam doesn’t go into clear detail how Beam Suntory plans on using what is practically an AR advertising platform, other than a “co-branded AR interactive memory game”. Shazam does seem to have some plans for its own kind of functionality, like giving users a preview of chart-topping singles and tracks. 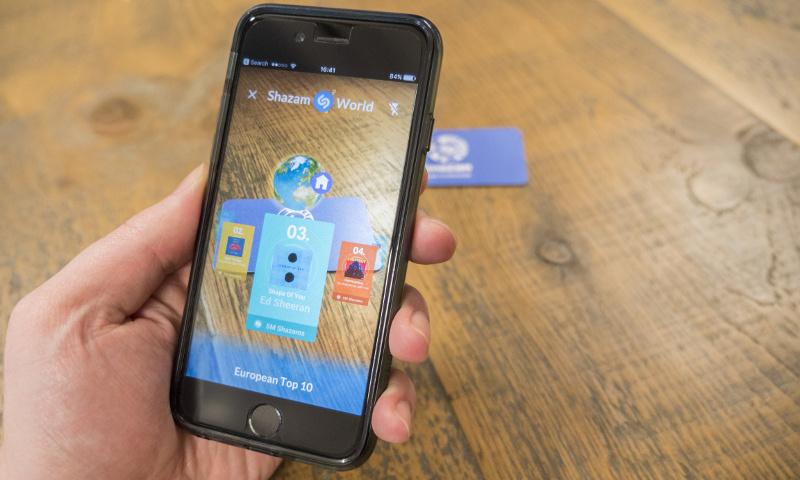 This AR functionality is built right into the latest Shazam apps, available for both Android and iOS. Of course, for it to work, you’ll need those specially marked cards or stickers and Shazam has yet to reveal where those can be found. Aside from tequila bottles.