Dinosaur bones in London contain traces of what appear to be red blood cells and collagen. These scientists have pulled up results from dinosaur bones they’d only otherwise called “crap” – bones so fragmented and shotty they’d been put into storage. Because of this, material scientist Sergio Bertazzo asked paleontologist Susannah Maidment (both of them from Imperial College in London) whether the bones might be OK to break open and study. One morning Bertazzo “turned on the microscope… and thought ‘wait – that looks like blood!'”

While techniques like carbon dating require that pieces of the specimen be destroyed, it’s not quite like what’s happening here. Snapping a bone in two – going deep within the innards of the bone, where the outer layers have preserved the inner surfaces – that’s where these scientists are going. That’s not often a place researchers are allowed to go.

NOTE: figure (w) was added by Chris Burns of SlashGear for illustrative purposes.

BELOW: Ungual claw from theropod used in this study. Photograph: Laurent Mekul 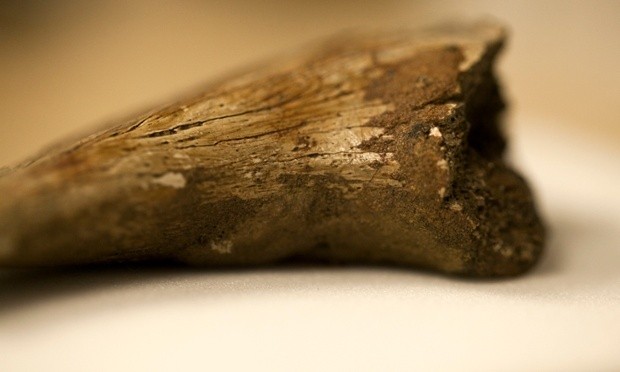 “It’s really difficult to get curators to allow you to snap bits off their fossils,” said Maidment.

“The ones we tested are crap, very fragmentary, and they are not the sorts of fossils you’d expect to have soft tissue.” 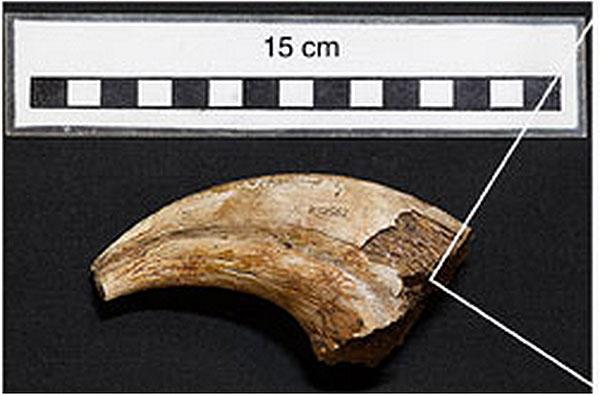 The bones tested were discovered in Canada around 100 years ago. They’d been studied using now-outdated techniques. They’d suffered damage and contamination on their outer bits.

One of the first things Bertazzo did once he’d discovered the red blood cells was to test for a cell nucleus. If a cell nucleus were indeed missing, it would have indicated that the blood had come from a scientists that’d studied the bones before.

Below you’ll see a scanning and reconstruction of the 3D shapes of the serial sections taken of red blood cell-like structures. This video comes from Bertazzo et al., Nature Communication.

Lucky us, the blood wasn’t human. They found “what looked like a nucleus,” this providing evidence that “ruled out someone bleeding on the sample,” said Maidment.

While this group has not yet found any genetic material in the fossils, Maidment suggests that it is “unwise to say never.”

Speaking with The Guardian on the dinosaur bones Bertazzo suggested the following on the possibility of additional tissue being found in bones around the world.

“This opens up the possibility of loads of specimens that may have soft tissue preserved in them, but the problem with DNA is that even if you find it, it won’t be intact,” said Bertazzo. “It’s possible you could find fragments, but to find more than that? Who knows?”

We know what comes next.

You can read more in the paper “Fibres and cellular structures preserved in 75-million–year-old dinosaur specimens” from Nature. This paper was authored by Sergio Bertazzo, Susannah C. R. Maidment, Charalambos Kallepitis, Sarah Fearn, Molly M. Stevens, Hai-nan Xie, and can be found with code doi:10.1038/ncomms8352.