If the Star Trek Holodeck is the virtual reality dream, then Sandbox VR has got closer than most. Opening in new pop-up locations in San Mateo, CA, as well as other US cities, ahead of fixed centers in San Francisco, Los Angeles, and New York, it’s a tried-and-tested group VR experience that has already seen success in Asia. Now, it’s hoping to bring that experience to the US.

When I stopped in for a pre-opening test run at the San Mateo, CA pop-up, I discovered a lot of the hardware used is actually off-the-shelf. HTC VIVE PRO for the VR headset; gaming laptops integrated into backpacks for the processing; rumble vests to give you that authentic “I’m being hassled by a zombie” feeling. Sandbox VR’s special sauce is in how it all works together, because none of these things were really designed to turn a room into a Holodeck.

VIVE’s positional tracking uses cameras and isn’t intended for multiplayer, for a start. That led to the Sandbox VR team eschewing HTC’s lighthouse tracking altogether, and building its own homegrown system instead. An array of cameras mounted high up on the walls track ball-spiked wrist and ankle bands, as well as the hefty-feeling gun and the VR headset. It’s like the motion-capture systems that big-budget movies use to turn Andy Serkis into Gollum. 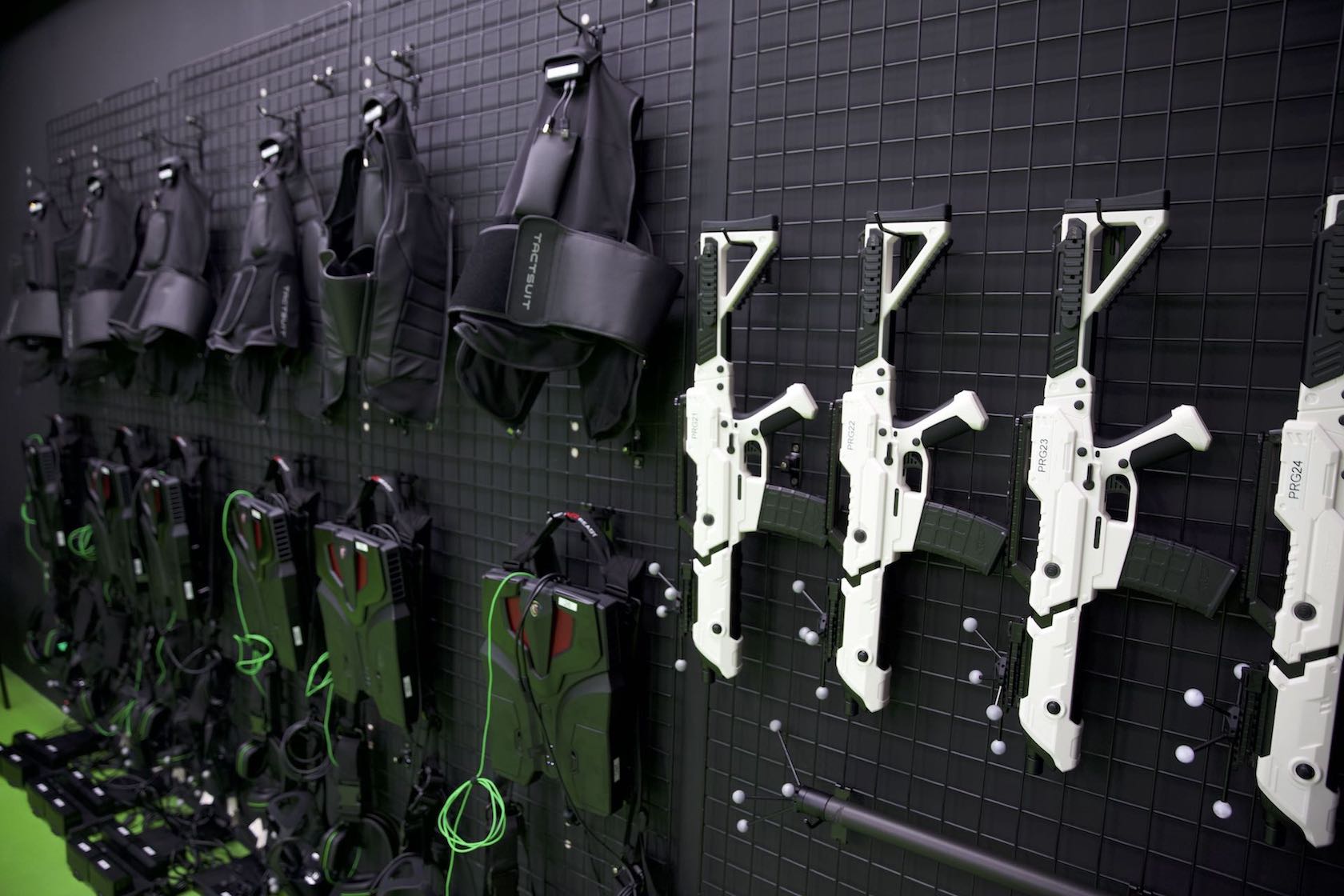 Those systems, though, aren’t designed to work in real-time, but Sandbox VR doesn’t have the luxury of a post-processing team. Instead, it does everything as you move around the green-painted room.

Get ready for some flesh-eating

I confess, I wasn’t expecting great things. By the time I had the haptic vest zipped tightly around my chest, the laptop-backpay hanging from me, and the motion-capture bracelets poking out from my limbs like some awkward porcupine, I wasn’t entirely sure there’d be a VR experience immersive enough to make me feel anything other than gawky. Happily, Sandbox VR’s homegrown “Deadwood Mansion” game is enough to overcome that.

Each room can handle as many as six people or as few as two. Siqi Chen, Sandbox VR’s Chief Product Officer stepped up as my trusty lieutenant, and we conscripted another guy from the build-in-progress facility to back us up. Then began a roughly half-hour adventure. 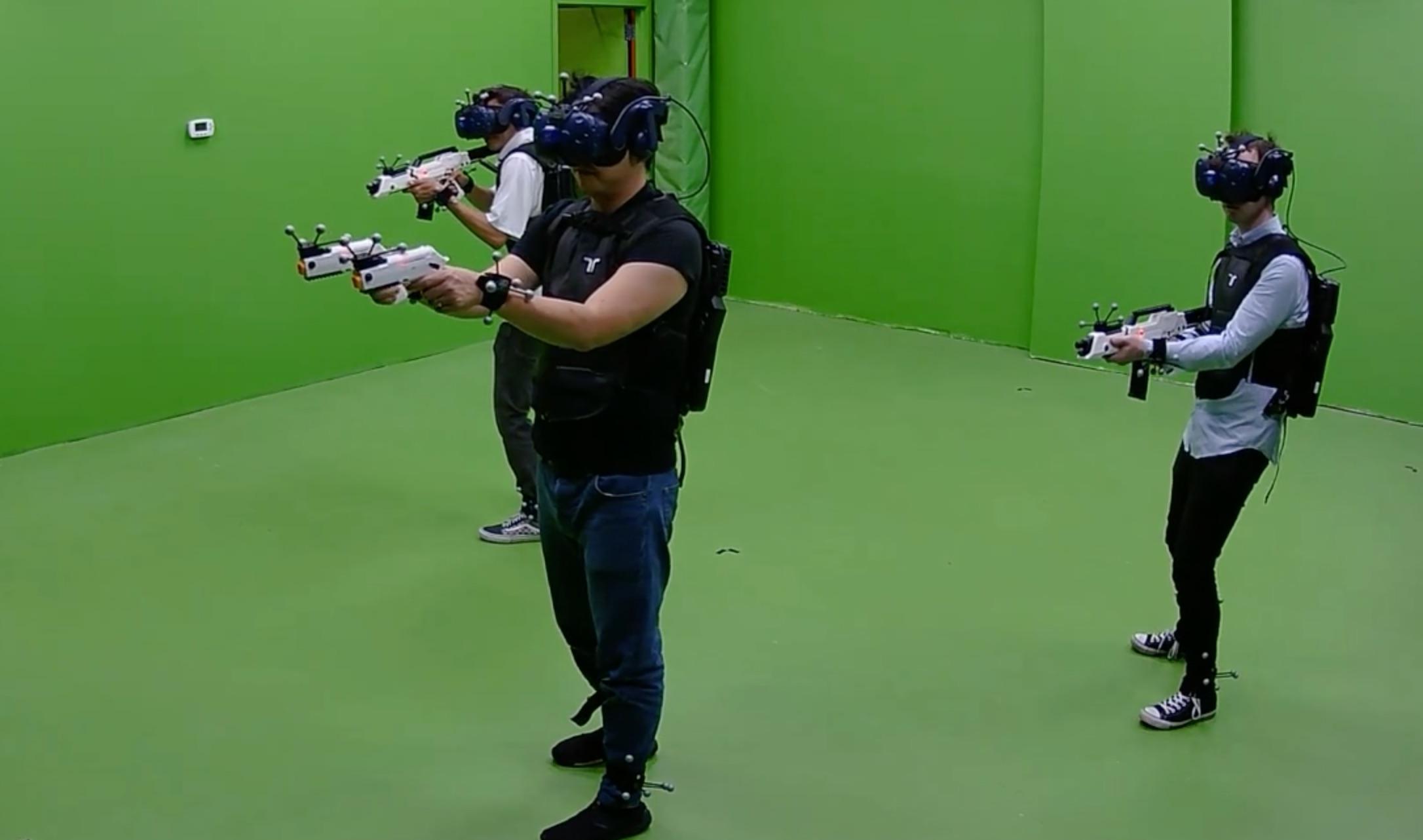 Like VIVE, you stand in the middle of a defined space within which you can walk around: virtual walls shimmer into place if you’re getting too close to the edges. “Deadwood Mansion” places you in the hallway of an abandoned mansion house, and then over the course of the next thirty minutes sends zombies, flesh-eating rats, and worse at you from all angles.

The story is a fairly meager thing, enough to hang the idea of undead hordes from and give the whole experience just enough structure to make sense. What surprised me the most, though, was just how into the game I got. I was, it turns out, a terrible commanding officer when it came to giving tactical instructions, but I’m a lot better at sniping off zombies by leaning around virtual pillars and ducking under head-severing blades. 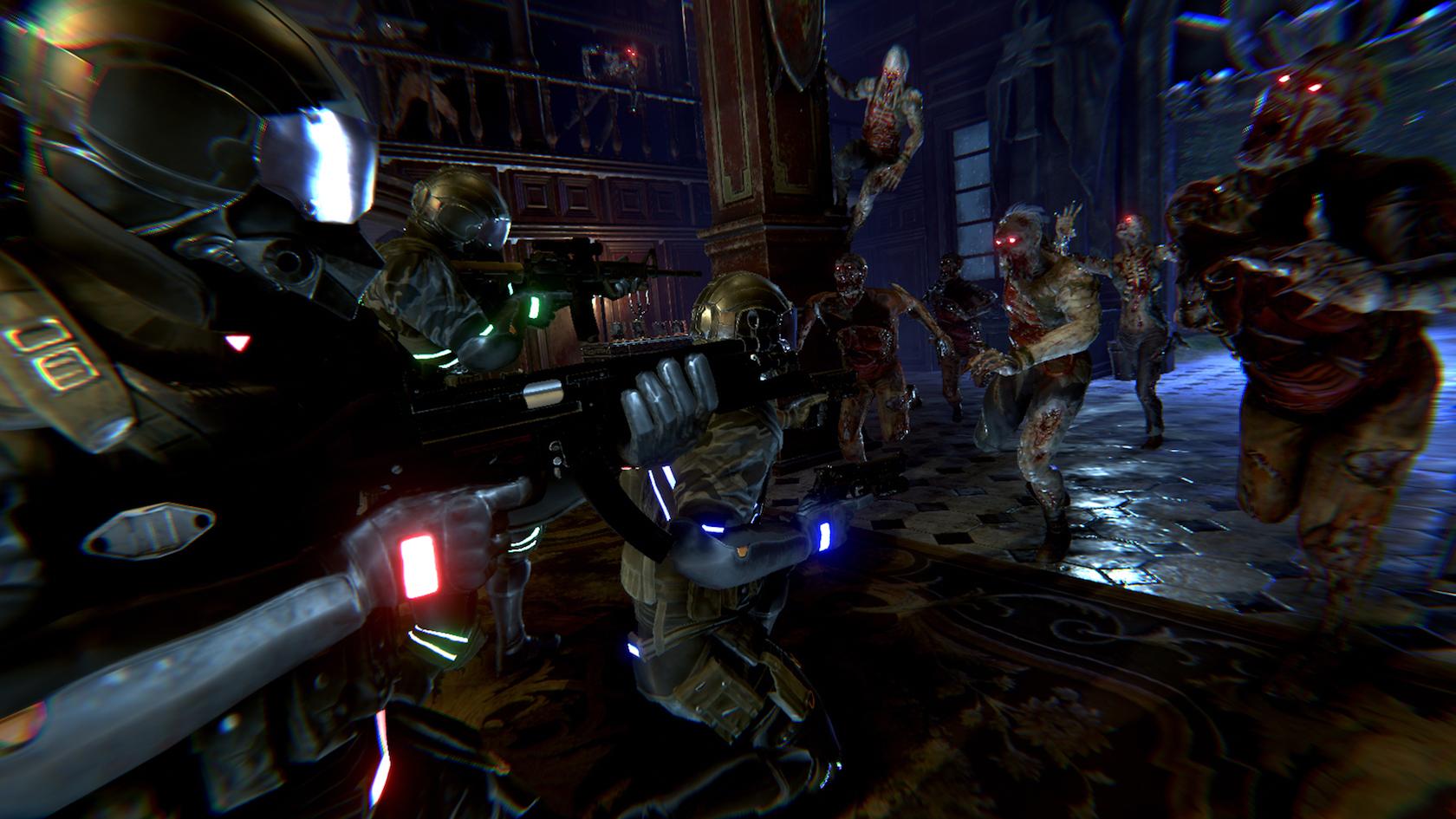 Sensibly, unlike a traditional game there’s no real “death” if you’re a bad shot. Get overwhelmed by zombies and you get greyed-out: someone else from the team has to boost you back to life by putting their hand on your shoulder for a few seconds. It’s just enough peril to make the whole thing exciting, and by the time you add in the creepy sound effects, the sprays of virtual zombie blood across your visor, and even wind effects from a bank of fans mounted on the game room wall, your heart rate will absolutely be higher than usual.

It’s all about the teamwork

Bragging rights are, officially, for the person with the most kills and who took the fewest hits, but really the biggest success is just how immersed you find you’ve got by the end. As with other virtual reality systems I’ve tried, I began Sandbox VR feeling vaguely ridiculous. As we posed for a post-battle groupie, however, I was just about ready to buy into my new life as a futuristic marine.

It’s that, Chen explained to me afterwards, which is helping give Sandbox VR its longevity. The game’s storyline – and that of the company’s other title, the pirate-themed “Curse of Davy Jones” – are pretty regimented: you might expect people to play once and then lose interest. Instead, Chen told me, a sizable proportion of people end up coming back, usually bringing a new group of people with them. It’s the social element which is the addictive part, not necessarily the game itself. 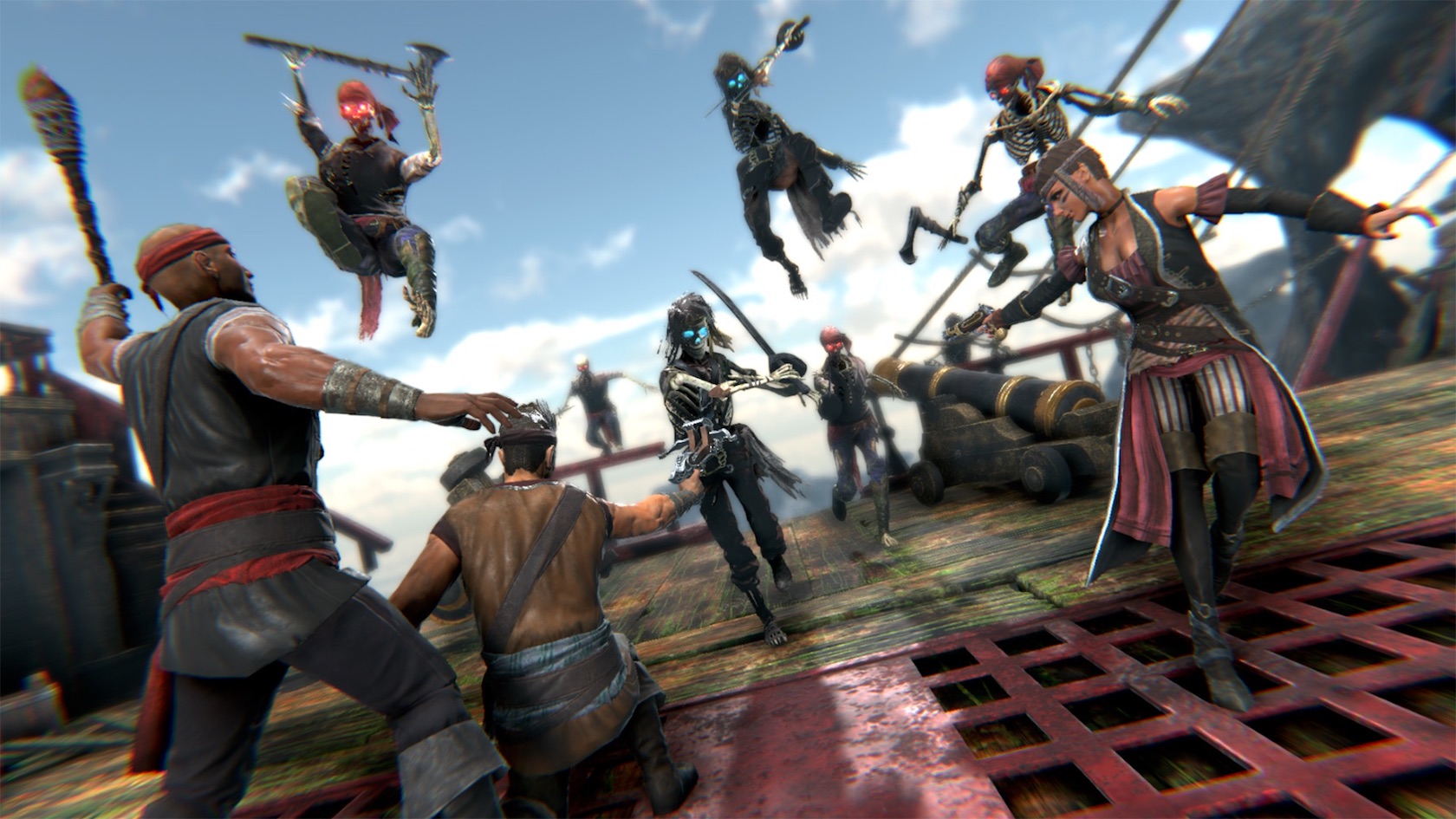 In time, Sandbox VR plans to polish up the virtual experience even more. Chen expects the next generation of VR headsets to support wireless tethering: that way, you wouldn’t need the PC backpack. Higher resolution graphics and more physical effects – rumbling floors, perhaps – are also likely.

At $38 per person at “peak” hours – after 6pm weekdays or all day at weekends – or $32 per person outside of that, it’s not necessarily a cheap VR experience. The obvious comparison is to a movie, which lasts longer but does so without the clear social element that Sandbox VR has. Or, you could save up for a VIVE PRO or Oculus system of your own, albeit single-player only. I could certainly see Sandbox VR being a great team-building exercise, or somewhere for a teen’s birthday, assuming you’re near one of the six locations worldwide. And at the end of it all you get a video of just how well – or badly – you did, perfect for a Facebook boast.