With the newest in Samsung touchscreen technology for the PC universe, the Series 7 SC770 monitor hits the market with a look that’s as sleek as it is minimalistic. We’ve had the opportunity to get an extended look at and feel for this particular monitor working with Windows 8 quite recently, and came away quite impressed. Whether this is your first time considering a touchscreen monitor to enhance your otherwise non-touch PC or you’ve worked with several in the past, the Samsung Series 7 SC770 may well be right up your alley.

What you’re getting with this display is an easy way for you non-touchscreen monitor users to upgrade to a touch experience with Windows 8. With the software included with this machine and the built-in touch-friendly abilities given to you with Windows 8, it’s only a couple steps between opening the box and working like you’ve always had touch from the start. 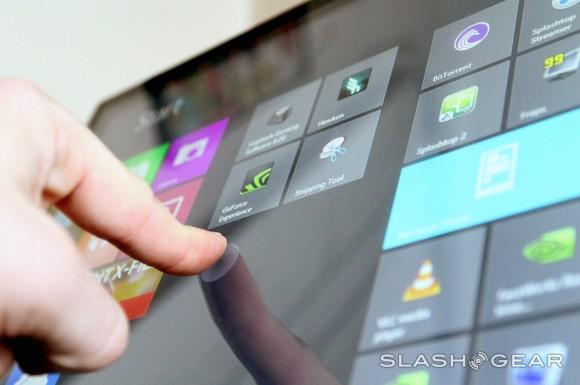 This display comes in at 24-inches diagonally and works with a 16:9 width-to-height ratio. With an MVA rolling in with 1920 x 1080 pixels of sharpness, this is easily one of the finer fully touch-capable monitors on the market today. You’ve got 178-degree viewing angles from every angle as well as what’s quoted by Samsung as 250 cd/m2 brightness – from an everyday perspective, that simply means its bright enough for essentially any situation.

What we’ve found here is an experience relatively similar to what we saw and felt with our recent LG ET83 Touch 10 LED monitor, but there are some rather important distinctions between the two. While the two work with essentially the same touch-response (down to the number of fingers you can use at once – 10-point touch), the Samsung display presents itself as a much more grown-up and classy affair. Where the LG monitor uses white, shiny plastic that’s easily visible from all sides, Samsung opts for black shiny plastic with a metal stand base – this allows the Samsung machine to exist as a much more put-it-anywhere sort of device. 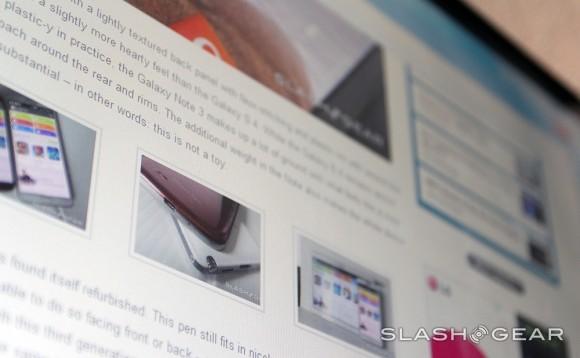 The Samsung monitor we’re using today also has a very similar screen setup to the LG monitor insofar as the space between the display glass and the display panel. Unlike most traditional monitors being released today, there is a significant amount of space between the display glass and the actual display behind it. While this space does not affect your touch experience – it remains top-class – the look around the edges might just throw you off a bit. It’s normal, and you’ll quite likely get used to it quickly enough.

This monitor works with a single Audio Out port so you can either use the built-in speakers (which are OK, but nothing to write home about), or continue the flow of audio from your PC through an HDMI cord to the monitor on out to 3rd-party speakers. Built-in you’ll find two 3W speakers – well and good enough for everyday YouTube watching, but that’s about it. 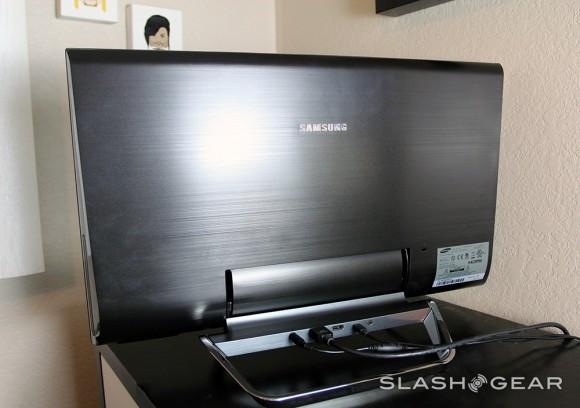 This monitor is able to tilt between 5-degrees and 55-degrees, meaning you can set it up to use as a standard monitor or ease it back for some cool keyboard app playing. This also works well if you’re all about touch-friendly war games – of which there are at this point a few thanks to developers working for the greater good of the Windows 8 touchscreen universe. 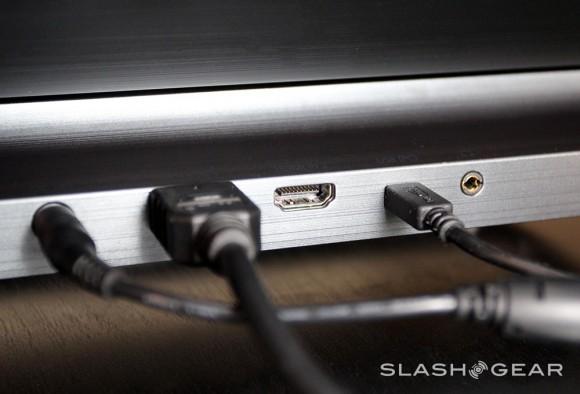 Also of note is this monitor’s ability to work with OS X. Though the touch environment inside the most recent versions of Apple’s desktop operating system aren’t nearly as touch-friendly as Windows 8, it’s certainly a refreshing way to go about tapping away. You’ll still need a physical keyboard in that case – but the point here is that Samsung supports installation of compatibility software for both PC and Mac, and they both work like a snap.

The Samsung Series 7 SC770 touchscreen monitor is headed toward your favorite retailer of fine electronic devices immediately if not soon. You’ll find it for MSRP $599.99 USD, and well worth the investment. Feel free to have a peek at the gallery below as well for some more close-up action.